The Father of Indie is Dead

One of the television programmes that I will not be writing about in my annual pick of the year blogs will be the BBC’s latest rockumentry The Seven Ages of Rock. I saw a couple of episodes and found them an incredible mixed bag. The episodes on Prog-rock and Heavy Metal (which is not really my thing) I found interesting & informative. The episodes on Punk and “Indie” (which i am very much a fan of) were frustrating and taken from a particular viewpoint. The indie episode started from the viewpoint that “indie” was an invention of The Smiths, being a case in point.

I mention this now because at the weekend, arguably the father of “indie” music (if we must call it that) Tony Wilson passed away. As well as being a television presenter in the Granada region, he also started a record label with some money that he came into. The intention was that new bands would put out some singles on Wilson’s label before signing with a bigger operator, as had been happening with the previous independent record companies which had sprung up in the wake of Punk. All this changed with the arrival of Joy Division, and their manager Rob Gretton.
In an earlier blog, I had Tony Wilson as one of the 5 people/acts who really, really earned an outstanding contribution to music gong at the Brits. Apart from the acts that appeared on the Factory roster at one time or another (Joy Division, OMD, New Order, James, Happy Mondays to name 5), they lead the way for other independent record labels, which in turn helped their acts to thrive. Mute had Depeche Mode from the start, as well as Goldfrapp, Rough Trade was the home to The Smiths, while Creation was home to Primal Scream, the Boo Radleys, Teenage Fanclub and Oasis before it sold itself to Sony in 1995. As a result, the British music scene flourished in the late 1980’s, breaking free of the shackles of the major labels.

It was not just in guitar music that Wilson and Factory led. In 1981, New Order were touring the USA for the first time. Danceteria in New York made such a big impression on the Factory entourage that they began planning their own version in Manchester, much to the chagrin of Martin Hannett who was hoping that Factory would invest in Studio technology, particularly a Fairlight sampler (Wilson & Hannett fell out over this, Hannett returned to the Factory fold in 1988 to produce the Happy Mondays “Bummed” album). The result was FAC 51, or The Hacienda, which 6 years later was at the epicentre of the boom in Acid House.

Personally I am sad as a little individuality has gone out of the British Music scene. I’d have also preferred Wilson to find the next great thing rather than Simon Cowell.
See You Later.
Posted by Allan at 23:07 No comments:

Hmmm, as you can see, not the best start to the season.

To be fair to motherwell, the were excellent for the first half. They were first to every ball, first in the tackle. The winner was the most unexpected piece of football you will see all season, and the best goal I have seen with the naked eye for a long time. There were about 3 1-2’s before the ball found McGarry. Gee thanks for that one Mr Hendrie.

I know that it was only the first game of the season, but can our defenders please stop launching long balls forward. As we showed for (not long enough) spells in the second half, if our midfielders get the ball they are able to produce the same sort passing style that worked for Motherwell in the first half. The long ball tactic made us look one dimensional. No wonder Mark McGee changed his formation to a defensive one after 10 minutes of the second half.

Still should be a nice easy game next Saturday.

I was going to write about the St Mirren game on Saturday (there will be more on that later). However, a couple of stories appeared in the Paisley Daily Express yesterday, which quite frankly demonstrate what a hair tearingly frustrating place Paisley is. It also shows why it is such a hole. 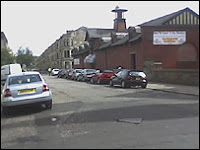 ” where the FM, Alex Salmond is critisised by all right minded Paisley Buddies, and Hugh Henry, for giving the go ahead for Paisley University to change its name to The University of the West of Scotland. Mr Henry, I should point out is my local MSP, and he is “Furious”, claiming that “The SNP made great play about retaining the name of Paisley in the title. Now we find that with no consultation and no publicity, Alex Salmond and the SNP have betrayed Paisley, its history and its heritage”

This is clearly humbug from a former minister who would have been bound by the position of the Scottish cabinet when they gave the mearger of Paisley University and Hamilton’s Bell College the thumbs up. I am also offended because this is really small beer compared to the shooting at the weekend of Andrew Devlin outside of Suzy Q’s nightclub in Paisleys Stock Street (pictured).It is one of the great failures of the New Labour led executive that the criminal gangs survived and prospered. Its no surprise that Mr Henry would want us to forget their failings on that front, but to pick on something so trivial… Scottish New Labour really have lost the plot.
Posted by Allan at 23:09 No comments:

Tomorrow the football season begins all over again. Here in Scotland, we hope th 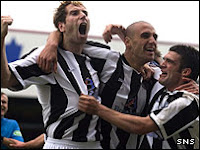 at the season will go on to conclude at next years European Championships, held in Austria and Switzerland. Crucial fixtures in the Autumn against France (away), Ukraine (Home), Georgia (Away), and Italy (Home) will determine if we get there.

In the meantime the domestic season gets underway. After last seasons dramatic escape from relegation, the mighty St Mirren begin their last season at Love Street with a visit from Motherwell, who have provided some happy memories of late for the Saints. On top of their 3-0 defeat in the Scottish Cup last year, St Mirren were undefeated against the Steelmen last season, culminating in the 3-2 win on the penultimate day of last season which sent Dunfermline into the Scottish League.

Of last seasons squad, the biggest losses are Kirk Broadfoot, who has moved to Rangers, and top scorer John Sutton, who has gone to Wycome. After the departure of Adam and Lappin, this leaves Van Zanten and Kean as the surviving key players from the 2005/6

Gus McPherson has not been idle in the transfer window. He has brought in 4 players, Mark Howard from Cardiff, Will Hainning from Oldham, Gary Mason from Dunfermline and, prehaps the bigest coup, Craig Dargo from Inverness. Dargo is a former Scotland under 21 player, and has scored a lot of goals with Kilmarnock and Inverness. It will be unfortunate that he will not start against Motherwell, as he is a key player.

This season, I think that we will finish just outside the top 6, maybe about 8th. Gretna will fight it out with possibly Inverness for survival. As for the championship, it will be Celtic by 5 points.

Enjoy the rollercoaster.
Posted by Allan at 23:47 No comments: