A couple of weeks ago, I started a new job. As part of the training, I did a short course on Data Protection. I mention this because parts of it came back to me last night after watching a report on Watchdog regarding various data protection breaches emanating from Her Maj’s Revenue & Customs department. The largest breach, the missing discs with the 25 million child benefit claimants is still at large, but these other leeks are perhaps more worrying.

The most interesting part of the training related to working conditions which would see a rise in security breaches. These include Autocratic Line management, over emphasis on performance targets, lack of an audit trail and low morale. Bearing in mind that politicians of both colours were engaging in race to see how many jobs they could axe from the civil service (sorry, they were identifying savings) during the last Westminster election campaign, you would think that perhaps that they would take some of the blame.

Err no, it would appear that it was some managers fault. In the mean time, there is no sign of the discs, the mistakes and breaches pile up, and the missing data has fallen off the news agenda.
Posted by Allan at 23:51 No comments:

Today will be a big day in qualification for next years European Championship. Northern Ireland need a win tonight against Denmark to stay in the hunt (their last game is away in Spain), while all of England will be hoping for an Israeli win over Russia this evening. The main event though will be in just about 2 hours when Scotland play Italy, needing a win to qualify (Italy play the Faroes & France are away to Ukraine on Wednesday, this is Scotland’s last game). Its Scotland’s biggest game since the Netherlands playoff game 4 years ago, and the most eagerly awaited Scotland game since the England play off games 8 years ago.
The hype started when Scotland beat France 1-0 in Paris in September. Since then we have beaten Ukraine 3-1 (I saw highlights of this game in Malta, with German commentary, weird!), but lost 2-0 in Georgia. Glasgow was full yesterday of people with various pieces of

Scotland paraphernalia, Kilts and Scotland tops. Incredible. I only hope that if we lose, we don’t take it badly. We do have a good record against Italy in Scotland, we beat them 1-0 in qualifying for the 1966 world cup. We drew 0-0 at Ibrox in 1992 (USA ’94) and more recently we drew 1-1 at Hampden 2 years ago (See picture).
I think that we can win, I only hope that Italy aren’t in the mood to sweep us aside. I suspect that we will only get a draw, which will mean us hoping for a Ukraine win on Wednedsay.
Posted by Allan at 14:55 1 comment:

A Small Tase of Timeshare!

Yep, it has been ages since I posted, well I have been away and had stuff to do when I got back. We were away in Malta last month, and it was not the best holiday that I have ever been on. Firstly, our flight was delayed by 19 hours, a computer had malfunctioned so one had to be flown in from Switzerland. Gee thanks a bunch British Jet (is it me or is that the naffest name ever for an airline company, just with the addition of the word British? By the time we arrived at our hotel (and the time that our hotel discovered w 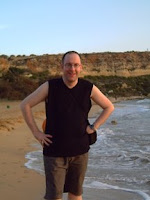 hat had happened to us, again thanks British Jet), our rooms had to be re-booked.

We stayed at Radisson SAS Golden Sands resort, and it was great. Except for the staff. They bungled our room allocation, giving us a twin bed monster suite, before giving us a double bed room (we had asked for a double bed). They bungled next allocation too, by not alerting staff that the room we were now occupying was occupied. I am not sure who got the bigger surprise, myself or Clayton, the staff member who thought he was entering a vacant room… at 12:35am! They also bungled the fact that Claytons 6am alarm call was not cancelled, or that Clayton had inadvertently cancelled our card keys, so that when I went upstairs to get Ange’s hat, I couldn’t get in. This held up the Malta tour that we had booked ourselves on (which the driver had no idea we were coming on).

The hotel bungled lots of things, but their attitude was good, compared to that of the Island Residence Club. They are the Timeshare arm of the hotel. We are toying with the idea of a timeshare, but this experience has put us off for the moment. We let them know about it, and they took the huff. Big style. Yvonne, the IRC manager ‘lost the plot’ completely, and Brian the ‘big cheese’ said our comments about how Anfi del Mar was miles better left him ‘depressed’. Aw diddums!

Though I wouldn’t say our experiences are the only factor. It’s a good hotel, but it’s just not a 5 star hotel/resort.

See You Later
Posted by Allan at 23:24 No comments: