Hullo.
In the second of my series of blogs looking back to 2007, the first of my TV picks of the year is the compelling thriller which started the year off…

Five Days is the only British Drama that I have picked this year. While most of the other dramas shown on television, and this is especially true of the big flagship dramas shown by the BBC/ITV and Channel 4, have had the air of being done before. This drama, shown at the start of the year & repeated on BBC4 in April, took the whodunit/thriller genre and added elements that the writers don’t normally think of.

This was an unusual way of telling the story, as was the decision to make the victims family a key part of the story. Normally in thrillers, the victims families are in a way the forgotten story, except if they have something to do with the crime. Here, they were centre stage, as the effects of the media storm around them were explored in detail.

David Oyelowo’s casting as Matt, Leanne’s partner, was good. His performance was excellent as Matt’s world crashed around him, his partner was missing while the press began to hound him over her disappearance in thinly veiled racist tones. Matt’s relationship with Leanne’s parents also was a key part of the story, with hints that Matt was tolerated but not really approved of. The appearance of Daf, the father of Leanne’s oldest child, Tanya (who pulled out of the fateful trip) casts new light on this relationship.

Another part of this drama is the appearance of media officers, and more crucial to the plot, the family liaison officer, who is the link to the two intertwining plots regarding the police investigation and the family reaction to what has happened. The investigating officers were excellently played by Hugh Bonneville & Janet McTeer, the characters again differed from bog standard got to have a character quirk normal TV detectives in that they just got on with the job in hand. McTeer’s character actually had shades of Jane Tennison running through her, especially during her retirement party in episode 5.

Overall, this is one of the most realistic dramas of this year. There are several twists and turns, with the ramifications and reactions of each event explored. To me, the final twist is one that did not become apparent until a minute or so before the final twist was revealed. A gripping drama, with an inventive narrative, “Five Days” is certainly an excellent drama.
Posted by Allan at 19:50 No comments:

Hullo.
As is traditional at this time of year, we look back over the last year. Indeed, the BBC have already done so with their Sports Personality of the Year programme. The shortlist was truly awful, but the correct person won.

2007 will not go down as a great sporting year, and this will be reflected when I pick my sporting moments of the year in a couple of weeks time. Last year I wrote about Caitlin McLatchey winning Commonwealth Gold and the catalyst it was to Scotland’s most successful Commonwealth Games, St Mirrens 1st Division Championship win, England’s World Cup exit at the hands of Portugal, Scotland’s Euro 2008 qualifying win against France and England’s defeat to Australia in the 2nd Ashes Test.

I wil also be picking my moment of the year, but firstly I will be picking my television moments of the year. Last year I picked 5 programmes, this year its doubtful if I will pick as many. Apart from not having so much time on my hands this year, the quality of television programmes has been exceptionally poor. Added to the ongoing scandal regarding faking competition winners, which surrounds most of our programme makers. 2007 must be the worst year in television history. Thankfully the Shetty/Goody thing in Celebrity Big Brother may just have been that programmes jump the shark moment.

I picked Life on Mars last year, which returned this year. This year’s series wasn’t as good, the first half of the series was ok, while the characters seamed to forget previous events. The last 3 episodes, coinciding with the introduction of the mysterious DCI Frank Morgan, saw the show back to its best. Ashes to Ashes, the follow up show has a tough act to follow. I also picked Doctor Who last year, and again the first half of this series felt as if the show was on cruse control. Again it picked up half way through the run, the Human Nature/The Family Blood story is up there as one of the best stories since Who came back. The return of the Master was excellent too, though it did have a bit of a rubbish ending. Last year I also picked Fantabulosa, Low Winter Sun & What We Did On Holiday.

Before I go, I want to mention 2 programmes I would have picked, had I seen more of them. Spooks any time I have seen it this series has been excellent, with Hermione Norris excellent as Ros, youre not sure which side she is on this series. Gordon Ramsay’s Kitchen Nightmares has also been excellent, I would go so far as to say that it is the best reality show on British television. I do wish the update shows didn’t feel like a repeat thought.

As ever all comments are welcome. See you next time.
Posted by Allan at 22:26 No comments:

Email ThisBlogThis!Share to TwitterShare to FacebookShare to Pinterest
Labels: 2007, Picks

Over the past week, the news has been full of stories regarding the donor crisis surrounding New Labour. Day after day the revelations have been coming. There are two things 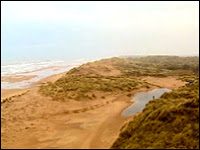 I have to say about this, firstly I am amazed that Wendy Alexander is still the leader of the New Labour group at Holyrood. I thought that she was toast reading the Sunday Herald at the weekend. Secondly, I can’t believe how bored I am with all the coverage. Actually bored is probably the wrong word, but I just feel completely unmoved by it all (I notice that the BBC's Political Editor, Nick Robinson is equally unmoved). In sharp contrast, the story which has got my nostrils piqued this week concerns the stramash surrounding Donald Trumps plans to build a golf resort, hotel and some holiday homes. Oh and also some houses too.

This story blew up last week when the Infrastructure Committee of Aberdeenshire Council blocked these proposals. The reasons given by the chair, Councillor Martin Ford, are.. . “It broke a whole raft of planning policies in relation to environmental protection, housing in the countryside and it had wider implications in terms of the council's whole approach to biodiversity conservation and the environment."

Now these seem like reasonable reasons for blocking a large development, yet supporters of the development have behaved incredibly since this vote was taken. Councillors have called for votes of confidence (and the resignation of) in Councillor Ford. The tone appears to have been set by George Sorial, who said after the proposals were blocked “It is our position that the council has failed to adequately represent the voice and opinion of the people of Aberdeen and the Shire who are ultimately the losers here”.

You would have thought that the Trump Organisation would dust itself off, amend the plans and appeal the decision. Yea right. The vitriol aimed at these councillors has been both terrible and yet suspicious, and it shows the ugly “Parcel o rogues” side of the Scottish psyche to itself. Sadly SNP politicians have been at the forefront of the attacks on Aberdeen Council, with the local MSP Brian Adam calling for Martin Ford’s resignation. The “calling in” of the planning application, to be investigated & discussed by the SNP government at Holyrood is the biggest slap in the face, and the biggest undermining of Scottish local government since re-organisation in 1994.

The SNP government have taken a huge risk over this, not in parliament because the move has been welcomed by all parties, but the perception of the government is at risk. If the proposals pass with amendments, the government will have done a skilful job. If however, the proposals pass unaltered, it will send a dangerous message to the world. Scotland is for sale. That will be a very big black mark for this SNP administration.
Posted by Allan at 21:44 6 comments: