This Tuesday sees the release of what the Post Office have called “Area 5 Plan” – essentially this is the closure programe for large parts of West Central Scotland out with the Glasgow area. This means that closures will be announced for Ayrshire, Lanarkshire and (very much on our doorstep) Renfrewshire.
The most interesting aspect of this is the random jockeying that has been going on in the Renfrewshire media, mostly played out in the letters page’s of the Paisley Daily Express. One letter caught my eye in April, I can’t remember who wrote it, but he said that any scare stories, which he believed were put around by the SNP, that appeared in the media were nonsense, and that there would be no post office closures in Paisley or Renfrewshire. Im not sure where he got his information from, but everywhere else had suffered Post Office closures, therefore the law of averages says, no dictates, that there will be closures here to. This started some of the afore mentioned jockeying with the SNP saying that this person didn’t know what he was talking about, and that he was clearly a Labour man.
Whatever happens on Tuesday, I hope that the local Labour politicians know who to blame. In Private Eye, date April 4th 2008, they ran an article which placed the blame at the door of the now former Chancellor, Gordon Brown…
“The current policy originates in the governments Shareholder Executive, announced by Gordon Brown in 2002 with the task to “better fulfill (the government’s) role as shareholder” of 25 publicly-owned companies like Royal Mail. Its target, on which bosses bonuses depended, was to increase the value of the six largest companies by £1bn by 2007.
Out went any notion that public corporations were also there to provide a public service. The men bought in for the job, first led by ex-CSFB investment banker Richard Gillingwater and now by former Deutsche Bank analyst Stephen Lovegrove, duly hit the target.
This was achieved largely by boosting the financial (if not service) results at Royal Mail following the installation of senior management, including chief executive Adam Crozier on multi million bonuses for boosting profits without penalty for service shortcomings. Unsuprisingly under Crozier & co, closures and redundancies have been the order of the day.”
The article goes on to outline that the Shareholder executive has a financial interest in cutting costs, and that they advise ministers on the companies that they “run” (into the ground).
So dear reader, if you see a New Labour MP, MSP or councilor complaining about the cuts on Tuesday, or any time soon, remind them that they are at fault for the backdoor privatization of the Post Office.
PS: Adam Crozier is the former Chief executive of the FA, who appointed Sven-Goran Eriksson. He acknowledged that there was corruption at her heart of football, only to be put in his place by the Premierships chairmen. The Chairman of the Post Office is the former Chief Executive of Leeds United, Alan Leighton. His involvement in the demise of Leeds from the Premiership is detailed in the book “Broken Dreams” by Tom Boyer
Posted by Allan at 10:30 No comments:

All honeymoons end, even the one enjoyed by the Blair government ended, at some point in 2000 (about the time of the fuel protests and the slow handclap by the WI). But the current SNP/Lib Dem administration in Renfrewshire, it is safe to say has reached the end of its honeymoon, even if there are some who said it ended just after they took office.

In the current economic climate, this is simply offensive, for an organization in debt, this is madness. Remember that not so long ago, Renfrewshire council were in trouble with our elderly for increasing warden charges in sheltered housing areas, on top of the myriad of cuts to community services. Our rulers are asking us, the plebs, to tighten our belts. Meanwhile at Mill Street its trebles all round, and that's just the cuts to the library service! (Presumably to make way for these wage increases, and not just to service Renfrewshire's large PPP debt). I don't normally see eye to eye with Terry Kelly, but he more than has a point when he says "The rise of more than £11000 is more than some of our lowest paid workers get in a year and quite frankly, I feel that is obscene".

The leader of the council, Derek Mackay, in response said something about paying the going rate for staff. You know, the stuff that Michael Heseltine, Brian Mahwinney, Peter Lilley and other right wing members of the Major Government used to trot out when the bosses of (recently privatized at the time) utilities got criticism for their fat cat pay. Interestingly, the fat cats remain, but the current (New Labour or SNP) government(s) don't criticize them for their inflation busting, economy wrecking largesse.

To come back from that tangent, Mackay went on to say "What should we do, bury our heads in the sand and wait for this mystic time when people are going to jump for joy at the news that highly paid officials are getting an increase? We cannot hold off any longer on this or we will find that we have lost all our good staff because we were not willing to pay them what they are worth"

This would be great, if the majority of staff were getting the same increases, or if the staff getting the increases were any good at their jobs. As far as I can see, Paisley's still going down the pan, we still have feral teenagers rampaging through our streets at night, with nothing to do. We are supposed to have community wardens, for all the good it does. They and their bright red uniforms and their fleet of red mini-vans should be the first thing to be axed instead of putting charges up for wardens at sheltered housing areas. Paisley town centre is still a mess, with empty shops. Littlewoods is still empty, as is the area where Arnotts used to be, 5 years ago. Can you tell that I think that they're simply not worth it.

The pay rise really does smack of the new British disease, the one of 'rewarding failure'. And is something that cannot go on. New Labour do it at Westminster by saying nothing about the bonuses that the bosses of the High Street banks get, even though it is their failures & hubris that have caused the credit crunch. Our devolved government here are not any better in this respect, and it would appear neither are the nearly new brooms in Cotton Street. With the difficulty in squaring the deficit bequeathed to them by the previous administration, this potentially could be a "jump the shark" moment for the SNP/Lib Dem. The problem is, if they sink, what are the alternatives for 2011. 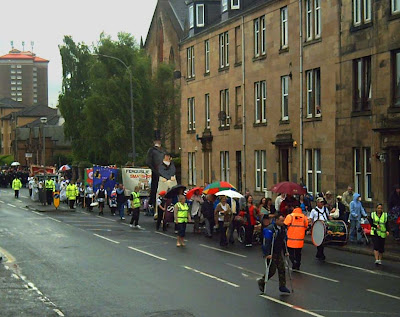 This weekend was the annual Sma Shot day in Paisley. Not the nicest day overall, which was a shame. This extract about what the day is about comes from the Renfrewshire Council website... 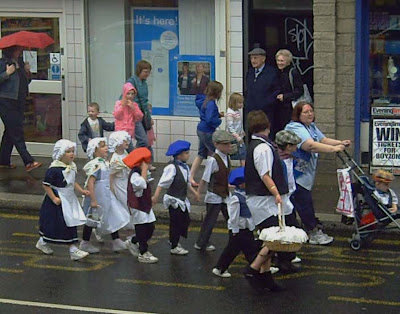 "One of the oldest workers' festivals in the world takes place in Paisley this weekend.The traditional Sma' Shot Day celebrates the historic victory of the weavers ove 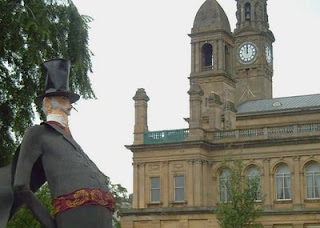 The event, which takes place this Saturday (5 July), has developed into an annual celebration of arts and culture in Renfrewshire.The festival is the result of a political battle between the weavers of Paisley (who created the famous Paisley pattern cashmere shawls) and the mill-owners.The Sma' (small) Shot was a thread binding the shawls together. However, as it was unseen, the 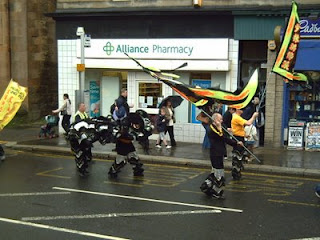 manufacturers, also known as the corks, refused to pay for the thread which the weavers had to buy.
The Charleston drum, which was beaten through the streets of Paisley to summon the weavers in times of trouble, was used to rally them in protest marches. After a long hard struggle, the manufacturers backed down and the weavers were paid for the Sma' Shot. The first Saturday in July was declared a public holiday by the weavers, who beat the drum and t 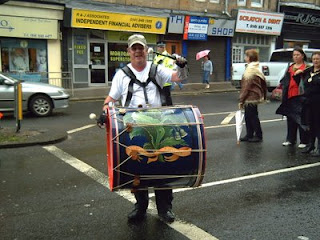 ook part in the annual trip until 1975.
However, in 1986, local councillors and the people of Paisley revived the traditional event and the Charleston drum still rallies the people for a procession through the streets, led by an effigy of one of the mill owners known as The Cork.The burning of The Cork is the climax to th 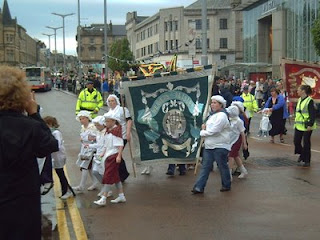 e Sma' Shot Story as told by PACE Theatre Company.Provost Celia Lawson said: "Sma' Shot Day is a unique tradition and an important celebration of Paisley's cultural heritage."The parade will set off from Brodie Park at 11am and will weave its way through the streets to 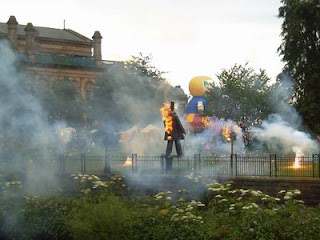 Abbey Close beside Paisley Town Hall.Once there, entertainment will include stalls, funfairs, the re-enactment of the Sma' Shot story, Loud 'n' Proud celebrating the Charleston Drum with a drumming extravaganza, and the burning of The Cork.Coinciding with Sma' Shot day this year is the Danny Kyle Memorial Concert, being held in Paisley Town Hall at 7.30pm.The concert commemorates 10 years since the death of one of Scotland's most famous folk musicians, and a number of acts are paying tribute."
Posted by Allan at 22:43 1 comment:

"This entry however is inspired by something i was discussing with a friend on Tuesday about football comentators.
I must admit that i am not a fan of football comentators on the tellevision, Mottson, Tyldsley, et al. Not even the Scottish football comentators of days gone by like Montford & McPherson are to my tastes ( I do like Jock Brown though). No, i prefer the comentators on the radio, like Green, Ingham & Begg.
I think this is because Television comentators tend to tell you the obvious things, a lot, and give you useless information as well. The constant crowbaring of references to England do not go down well either. Fine if England are due to play any of the teams involved, not fine in say Togo versus Switzerland.
I certainly feel that these reasons certainly curtails my enjoyment of football on the TV. I feel that Football comentators have a lot to learn from comentators of other sports. I think that it was Richie Benaud, the don of Cricket comentators, who said that he learned to not speak, unless he had somethin useful to say. Here here!!"

As for Motson, Im not sure if we'll miss him. The joke up here is that there are spread bets on when the first mention of England or 1966 is in a match, any match. Even France v Italy, but i can point readers on to another excellent article on Motson, by the scottish journalist Ian Bell, which appeared in the Sunday Herald last week.
Posted by Allan at 22:01 1 comment:

Hmmm, Wendy Alexander
Posted by Allan at 22:55 No comments: