The Scottish Government has repeated its calls for Scotland to have its own, separate team at the Olympics. Ministers said it would be good for Scottish sport. The SNP wants to hold an independence referendum in 2010 - two years before the Games in London.
Asked what Mr Maxwell would say to those Scots who would rather see Scotland's athletes play a big role in Team GB, Mr Maxwell replied: "What I would say to them, do Irish athletes want t

o rejoin the UK and be part of the UK team? Do we want to get rid of the GB team and have a European team because a European team would sweep the board? So I think you have to think about whether or not it's appropriate in the level you represent your own country in. I think it's quite right you represent your own country."
We finally have a team of winners at the Olympics, and this guy is calling for a seperate Scottish Olympic team. Chris Hoy has already said that he wouldn't be where he is today without the backup of the BOA, while Scotland saw the accrimonious defection about 8 years ago of champion squash player Peter Nicol.
A seperate Scottish Olympic team would be good, but i have one question for Stewart Maxwell, Show us the money!

Margaret Thatcher is one of those people who polarizes opinion. Nearly 18 years since she left office, there is still a visceral hatred of her and her policies across pretty much most of Scotland. The Poll Tax would be top of most people's list, followed by her treatment of the Unions (which in a way they deserved) & ordinary workers generally (which in no way they deserved). Her use of "Scotland's Oil", to fund tax cuts for the rich and putting people on the dole, creating the feral classes that we have today is another of her great policies. Oh and the Falkland's has to be in there too, 250 British soldiers sacrificed for a landslide win in the following Westminster election. The best way to sum up Thatcherism would be Eddie George's quote, several years after she had gone funnily enough, that "Unemployment in the North is a price worth paying for low inflation". Not the most, um, unifying of periods shall we say.

Funnily enough I had bought a book on the Miners Strike, David Peace's "GB84" a couple of weeks ago, still not read it yet, so this predate's my real reason for bringing up Thatch. Our fearless leader, Alex Salmond, gave an interview for an online politics magazine, where it is said that he praised Thatch. The interview was by Iain Dale, the Conservitive blogger, and the offending piece goes something like this…

Dale: "Ten years ago, the Conservatives were seen as a terrible enemy by the SNP, and they saw you as very left-wing. It seems to me that you have tried to change that, and create a big tent for the SNP."
Salmond: "I suppose I have tried to bring the SNP into the mainstream of Scotland. We have a very competitive economic agenda. Many business people have warmed towards the SNP. We need a competitive edge, a competitive advantage - get on with it, get things done, speed up decision making, reduce bureaucracy. The SNP has a strong social conscience, which is very Scottish in itself. One of the reasons Scotland didn't take to Lady Thatcher was because of that. We didn't mind the economic side so much. But we didn't like the social side at all."

So there we have it, we didn't mind the economic side of her policies so much. We. Thankfully for Salmond's sake, there are not any lynching parties with torches and pitch forks outside Bute House from the communities which Thatch destroyed . What planet is he from to come away with something as ludicrous as that? Has his foot been surgically removed from his mouth yet?

Of course, because this is the first, huge, own goal from Salmond. The New Labour politicians have been demanding an apology for the remarks, conveniently ignoring the theft of several conservative policies by New Labour to gain votes with the Daily Mail reading middle England. PFI/PPP, ID Cards, 42 day detention, scrapping of the 10p tax rate, tax cuts for the rich, Non Dom tax cuts, still no taxation plans for private equity firms, Out sourcing of our Civil Service, ram-rod refusal to scrap Council Tax… the list goes on. 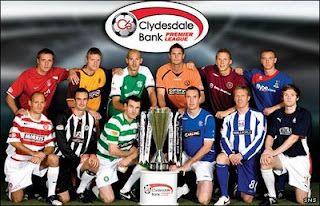 The Scottish football season gets in full swing tomorrow, with the start of the Scottish Premier League season, its 10th under the SPL banner, and there are dark clouds hanging over it. The tragedy comes with the news of the death last week of the esteemed broadcaster, Journalist, former school-teacher and Brains of Britain winner Bob Crampsey. The thing that I will miss the most is the knowledge and the precise ability to place any event in the mad world of Scottish football in its place in the grand scheme of things. This is something that most pundits who comment on Scottish football can't do without resorting to hyperbole.

The farce element to the build up to the new season comes in the shape of Rangers embarrassing European Cup exit at the hands of FBK Kaunas. How embarrassing? Well only the late Mr. Crampsey knows. It's not the first time that Rangers & Walter Smith have crashed out of Europe before the end of the Summer holidays, remember AEK Athens in 1994 (When Smith had just signed Brian Laudrup and Basil Boli) and then there was IFK Gothenburg in 1997. Rangers, under Smith, have also crashed out in the early stages of European competition to the likes of Sparta Prague (1991/92) and Levski Sofia (1993/94).

This is of course a major embarrassment to Scottish Football and Rangers, though there is the financial consideration of losing an estimated £1 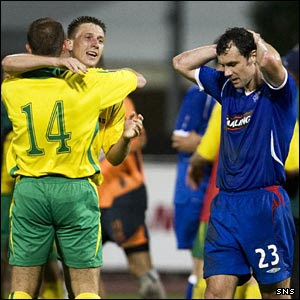 0 million from failing to make the "Champions League" stage of the European Cup. However if you ignore the crisis headlines surrounding Ibrox, you will see that this may be a blessing in disguise.

Of the examples mentioned above, Rangers went on to claim at least the Championship in every season bar the 1997/98 season (IFK Gothenburg). More recently, when eliminated from the UEFA Cup in 2002/03 by Viktoria Zizkov in the 1st Round, they went on to claim the treble of Championship, Scottish Cup and League Cup, though Celtic's march to Seville might also have been a contributing factor here. This is why I think that if Rangers can shake off the hangover from last season quickly enough, they will regain the Championship from Celtic, by a margin of between 4-6 points.
Elsewhere, Motherwell and Dundee United will fight it out for 3rd place, I take Dundee United to finish 3rd. The mighty Buds will continue the painfully slow progress that we have made by finishing 9th. I'm not really sure if moving stadiums mid season is a help or a hindrance, I just hope that it doesn't backfire. The Relegation issue is perhaps the closest to call. If Hamilton Accies go down, it will be down to a lack of experience at the top level. Having said that, I don't think that they will go down. I would say that Inverness or Kilmarnock are more likely candidates for the drop.
Whatever happens, hopefully season 2008/09 will be as eventful as last season. Oh, and i hope we win on Sunday!
Posted by Allan at 00:47 No comments: