So, the polls suggest that most Scots do not want Independence at this moment.  Those same polls also suggest that most Scots would like more powers given to the Holyrood parliament – more than were agreed in the woefully underwhelming Calman process which has led to the current Scotland Act.  Yet only the SNP are listening to the polls, by raising the possibility of a second question on “Devo-Max”. 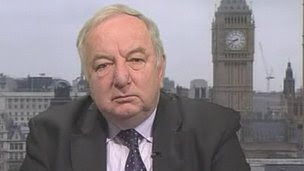 Cameron may well be listening too.  On Thursday he announced that more powers for Holyrood would come north in the wake of a no vote in the referendum.  Cameron may well be unaware that Scots fell into the same trap in 1979, when Alex Douglas Home promised a better form of devolution than the Assembly proposed by Labour.  That Yes – but falling short of the 40% required – led to the vote of no confidence that led to the election of Thatcher, who turned out to be no friend of the Scots.  We Scots have long memories, as for some people the SNP will always be “The TartanTories”.

Labour has been left behind in the referendum debates, yet they might just have been given a lifeline back into the debate.  The former MP and MSP George Foulkes (above) has proposed that there should be two referendums on Scotland’sfuture – held weeks apart.  Under the proposals, the Independence plebiscite would take place first.  Should Scotland vote no to Independence, then the second plebiscite would take place – this time revolving around “Devo-Max”.  Sadly there are no proposals to change the name of “Devo-Max” – which brings to mind goatee wearing snow boarders swigging a soft drink with “max” in the title.

Foulkes proposals shows the kind of…  um… outside the box thinking (sorry for the management speak) severely lacking in Labour thinking with this issue, and needs to be congratulated.  There are however a couple of problems with this proposal, which might turn people against it straight away.  The prospect of fighting essentially two referendums in short order will absolutely hammer the finances of our political parties – bearing in mind that it is Salmond’s intention to hold the referendum approximately 6 months before the next Westminster election.  Party treasurers up and down the land will be hiding in a darkened room come May 8th 2015.

There may well be the issue of “voter fatigue” as well, but a bigger problem may well be that no one has really defined “Devo-Max”.  I think of it as Fiscal Autonomy with powers stopping short of full independence, but a full definition has never been put forward.  It is here that Labour can get itself back off the canvas and rediscover the pro-Scottish campaigning swagger it had when they were helping to formulate Holyrood Mk 1 – if only they stopped carping from the sidelines.

Carping from the sidelines is something “Scottish Labour” is frankly awful at.  It’s time that they did something that they stopped doing in 1999 – that funnily enough the SNP have learned to do – and to positively campaign for a better Scotland.  If they believe that Scotland should not be Independent, they should continue to ask questions, but also to formulate “Devo Max”.  After all, if those polls are to be believed it could be their life line out of the cul-de-sac they find themselves in.
Posted by Allan at 10:00 5 comments:

Listening to "Call Kaye" yesterday morning, I was struck by how much...  um...  prominance we were giving the hot air filled American businessman come bully with shredded wheat for hair called Trump.

If you've missed the news, well after vandalising a large part of Aberdeenshire in the name of creating "the best golf course in the world" (as well as building some premium holiday homes), Trump has fallen out with the Scottish Governent, because of the decision to build wind turbines near his rich mans playground.  And I mean he has seriously fell out with Salmond.  In his letters to every MSP he has said

"Taxing your citizens to subsidise wind projects owned by foreign energy companies will destroy your country and its economy.  Jobs will not be created in Scotland because these ugly monstrosities known as turbines are manufactured in other countries such as China.  These countries are laughing at you.

I have just authorised my staff to allocate a substantial sum of money to launch an international campaign to fight your plan to surround Scotland's coast with many thousands of wind turbines.  It will be like looking through the bars of a prison and the Scottish citizens will be the prisoners.  Luckily, tourists will not suffer because there will be none as they will be going to other countries that had the foresight to use other forms of energy.

I am doing this to save Scotland."

Luckily, here at Dispatches, we know a pompus irritating bully, and the verry last person to be lecturing about vandalising Scotland when we see one.  So as a public service to our elected representitives, please see how a real politician deals with the likes of Trump.

Enjoy, especially Trump's look as the speech goes on...
Posted by Allan at 10:00 1 comment: