You know, this is getting to be a bit irritating.  Last year, I was mulling over a post on Ms Lamont’s chances and what she had to do to win in 2016 (a post which if it was done today would be four words – Whistling Dixie, move along) when the Scottish Referendum broke.  This year I have three posts I can’t finish when Cameron has announced that there will be an in/out referendum on the UK’s continued membership of the EU. 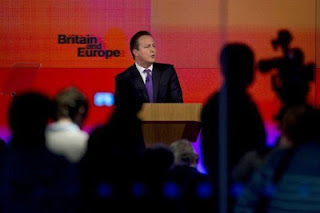 Cameron’s decision, I think stems from three reasons.  Firstly, I don’t think that he gets on with very many of the European leaders.  I have this feeling that since the veto in December 2011, Cameron had been smarting from the treaty going ahead despite his veto.  In effect, I think that it’s not really Britain’s relationship with the EU that is strained, but Cameron’s relationships at EU summits.  As I pointed out at the time, Cameron has proved himself to be a poor negotiator at these gatherings.  By flouncing out and not being prepared to play hard-ball (when Wilson, Thatcher, Major, Blair and Brown would have gained some sort of quid pro quo), Cameron had taken the easy way out.  Maybe this is Cameron’s revenge for being bypassed & ignored.

Secondly, I think that Cameron has done this to placate Eurosceptic’s both within his party and out with.  His announcement seems to have gone down well with his backbenchers, and quelled the murmurings gathering about his leadership.  I find this strange as most of the Tories natural bedfellows do not operate in governments across the channel.  The continental cousins of Thatcher operate in the EU and work for the ECB.

Of course, what this also does is pull the rug from underneath UKIP’s feet.  After being unceremoniously bitch-slapped on Politics Scotland at the weekend, 1950’s man Nigel Farage must feel the tide starting to go against him.  The strange thing is that the electoral impact of UKIP, I suspect, has been overrated.  They might be getting 12% in polls, but are still to make that final step from fringe party to mainstream party.  In sharp contrast, the last outside party to generate such a fuss was the SDP.  Within a year of their formation, they had won 2 By-elections (in Crosby & Glasgow Hillhead) to add to the 28 defections from Labour.  To date UKIP don’t really look like taking a Westminster seat – thought they do poll strongly in European Elections.  Despite the hype & hyperbole, UKIP simply are not the roadblock to an overall majority imagined by Cameron.

This leads us to the third reason, namely the Scottish Referendum and, more importantly, the Westminster Elections.  Cameron wants to become the first Tory leader to win an overall majority since John Major in 1992.  Cameron obviously believes that there are votes to be had in a referendum, there are probably strategic reasons for this as well.  This has probably paid dividends already with Miliband’s rather floundering response at PMQ’s today.   Polling evidence unfortunately takes longer to percolate.  I would wonder though how Euro-sceptical we are though, after all the battleground for elections in this country are not fought on our relationships with our European parties.  This brings us to the Scottish referendum.

The strange thing is that this does not really impact at all on the Scottish Referendum.  The SNP think (and they have a point) that the main argument of Better Nation has disappeared.  As I’ve said before, people won’t vote No because of any desire to have Scottish voices (filtered through the UK) on the big stage, there are bigger issues related to the bread & butter issues that will mean a No vote.  If Cameron has been taking an interest in the early exchanges in the referendum campaign, he will have noted though the self inflicted trouble Yes Scotland are in over the EU.

The EU referendum will provide a constant reminder of the mess that Salmond has made over this issue – in short it’s the wound that does not heal.  Unless the SNP perform a U-turn and promise a referendum over entry to the European Union (which I think is a necessity if the polling for a Yes vote is to recover), then we will continue to march towards a No vote.

I think that overall Cameron’s motives are all to do with his performance as Prime Minister and not very much to do with our relationship with the EU, he has announced this to divert attention away from our failing economy and infrastructure that’s falling apart.  Oh and to win the next election.  The problem is that for the moment an awful lot of people have been suckered in by Cameron’s actions without questioning his motives or the consequences. In the meantime, Cameron is back on the front foot of British politics.
Posted by Allan at 10:00 No comments:

Firstly, a happy new year to all of my readers.

2012 saw 36 posts, a decrease that probably reflects the sheer boredom with the Independence referendum…  already.  With 28 months till the next Westminster elections, speculation about what will happen there will probably begin to feature more on these pages.

So, what are the most read posts of 2012.  At 10th place is “Some Thoughts About That Opening Ceremony”, a post about that…  er…  opening ceremony.  As I mused towards the end, “maybe the most interesting thing to say was that it was probably a much better advert for the Union than anything “Better Together” will throw at us over the next two years” as the strictly non ennobled Danny Boyle cherry picked key shared British experienced and produced an opening ceremony only hardened Independence supporters and right wing Tory MP’s could possibly hate.  In 9th place is the first appearances of two recurring themes, Independence & the collective failure of “Scottish” Labour.  In this case “Worse Than Chloe Smith”was about Ian Davidson’s bad tempered, foulmouthed, rant on what he, rather wittily, calls Newsnat Scotland.  Jack Whitehall was apparently unavailable.

At 8,another post about the failures of Labour in the Independence debate.  Given the current climate for crystal-ball gazing over 2015, “The Week Labour Lost The Next Election” set out how Labour under Ed Milliband had severely hindered their chances of government at the next Westminster Elections.  Meanwhile i got my own crystal ball out in October to call the Independence referendum for the seventh best read post of 2012 – “Why Scotland Will Vote No in 2014”.  Bubbling under the top five is a post from March looking at the likely scenarios facing Scotland “After The Referendum”.

The fifth best read post of 2012 was a review of the Council elections that took place in May – with the feeling that the SNP would look back at “The What If Elections”.  If anything, the SNP’s problems started here.  In the aftermath, Jeff at Better Nation mused on whether now was the time for Alex Salmond to step asside for the Deputy First Minister to take the reigns and deliver a yes vote.  At number four in this list is my response to that post – “A Potted History of the Anointed Ones” – making the point that the history of favoured successors to successful political leaders is not a happy one.

Into the top three, and at three was a post wondering if the (at the time) forthcoming Council elections would see the SNP’s “jump the shark moment”.  Or, as the post put it “Is the SNP Backlash Coming?”.  This post also flagged up the possibility of the SNP losing Renfrewshire, despite that council’s former leader running the national campaign.  Hmmmm…

The highest placed post about the referendum is at number 2, and is about the last (at the moment) decent idea “Scottish” Labour have had.  “The Foulkes Manouvre” is about George Foulkes idea/wheeze that there should be dual referendums, one for Independence and (in the event of a no vote) one for “Devo max”.  The spanner in this idea was that “Scottish” Labour seems to have mislaid simple concepts, like representing the people that elected them and adopting popular ideas. Need I mention Devo Max again?

So what is the best read post of 2012 then?  In June Chloe Smith came to prominence as the front person for yet another government u-turn.  Her mauling at the hands of Jon Snow and Jeremy Paxman prompted the post “Chloe Smith & The Quality of Scottish Based Political Interviewers”.  A piece bemoaning the quality of BBC Scotland’s political interviewers while recommending that the BBC tap up STV’s Bernard Ponsonby.