You know how it is.  You write a blog about the stacks of Labour leaflets piling through you’re door.  You finish the first draft and then find that according to the fixed term act, the Prime Minister’s appointment (below) with Brenda to mark the start of the Westminster Election campaign.  This, as they say, will be one of those land speed efforts… 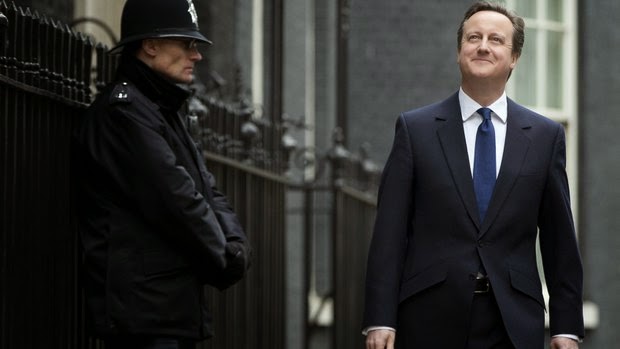 ‘Call me Dave’ Cameron’s pitch for his second (and last) term in office is that he needs to “compete the job of turning the country around” and that the choice was stark between himself and the main contender for his job, Ed Milliband.  Opening his campaign, Miliband agreed with Cameron saying the choice was stark by saying the choice was “to carry on with a Conservative plan based on the idea that as long as the richest and most powerful succeed, everyone else will be OK.  Or a Labour plan, a better plan, that says it is only when working people succeed that Britain succeeds."

It says it all about this election that normal targets have barely been mentioned.  However they do bear repeating.  The Cameron needs a swing of 1.8% on his showing in 2010 to win an outright majority, an overall gain of 20 seats.  Number 11 on that target list will be Morley & Outwood – the seat of the Shadow Chancellor Ed Balls.  Miliband needs to gain 69 seats (without any losses) to gain an outright majority – a swing of 5.1%.  Only Thatcher (in 1979), Blair (in 1997) & Cameron have won on swings higher than 5%. The Balls factoid apart, none of this is that relevant when polling shows both of the main parties struggling to get past the 300 seat mark.

The start of the election campaign being reduced to ceremony is not the only change from five years ago.  The Conservatives have been in government with the Lib Dems.  Opening the defence of their 57 seats, Nick Clegg painted the other two parties as extremists, saying the Lib Dems were the only party that could keep the other two parties tethered to the centre ground.  Five years ago, a meltdown in Lib Dem voters would have been good news for the big two.  This time around, the expected meltdown in the Lib Dem vote (which remember was 6.5m votes, their best as the Lib Dems) is expected to help Labour, but might help the Tories retain and gain seats.

Five years ago both the SNP and UKIP were outsiders (in a Westminster sense).  While UKIP’s vote looks as if it is starting to fade, if they stick around the 14% mark it will still harm Cameron’s chances of staying in Downing Street after May 8th.  The calculus for the SNP is completely different.

Since the referendum, polls have suggested that the SNP have reaped the benefits of “Yes Scotland’s” street campaigning with leads in the polls averaging in the high teens.  The most  recent poll shows the SNP ahead of Labour by 16% and suggests a swing from Labour to the SNP of 18%.  That swing would see the SNP capturing 28 seats from Labour (and all but one of the Lib Dem’s seats).  Were the SNP to comfortably hold on to their polling, this would represent a major roadblock to Miliband’s hopes of winning the election outright and would embarrass the Progress wing of Labour seeing Labour out New Laboured by our own MacNewLabour.

The big if will be if they can hold on to that poll lead.  Remember that there’s a group of 20 Labour seats around the 12-18% swing mark.  Should Labour eat into that lead, the SNP’s chances of taking a majority of Scottish seats recedes markedly. The big unknown unknown as well will be the proposed pro-union tactical voting pact.  This shouldn’t be discounted as Holyrood by election victories for both Cara Hilton (in Dunfermline) and Alex Rowley (in Cowdenbeath) both had the whiff of being aided by a Tories voting to keep the SNP out.  It would be ironic if Scottish Tory voters voted to boost the chances of Milliband entering No 10.

Even if this is the tightest election since…  mmmm…  well the last one…  a prediction or two is almost customary.  I think UKIP will win at most three seats, Carswell will hold his seat, Farage will win his.  I think that the SNP won’t gain 40 odd seats – the polls will narrow and I think the SNP will get somewhere in the high 30’s seat wise.  And I suspect that Cameron will still be in Downing Street come May 8th.  A Tory/Lib Dem pact looks like the most workable partnership (with possible aid from the DUP) so that would spike Milliband even if Labour emerged as the largest party.  Remember that the only cast iron rule to hung parliaments is that the incumbent gets first dibs at forming a government – both Heath & Brown could not form coalitions.

As with last time, this election could come down to an unscripted moment or gaffe.  Cameron’s car crash interview with Paxman doesn’t seem to have harmed him.  We will see what happens with the first set piece debate of the campaign, but the small things could be the decisive factor.
Posted by Allan at 00:01 No comments:

The Curse of the Favourites


One of the golden rules of power is to know when to stop, when enough is enough and not to go on past you’re sell by date.  Presumably it’s also a rule that you don’t advertise when that sell by date will be…

What is interesting though is the list of potential successors.  When Cameron is ousted, which he surely will be, will play better to different candidates.  Defeat in May will see Theresa May & Boris as the frontrunners.  Victory will see Osborne rise up the favourites list as presumably his stock will have risen.  There is however just one small problem with this set of outcomes.  The Tories have never elected the favourite to be leader since the leader was elected.

When Heath lost his third election in October 1974, Thatcher was some way down the list of potential leaders, even behind the chairman of the 1922 committee Edward Du Cann.  Indeed, if you’ve seen the coverage, it’s at the insistence of Bob MacKenzie that Thatcher is even quoted – he though that she was someone worth watching.  When Thatcher stood in January 1975, she was thought to be the stalking horse candidate – a candidate designed to damage the leader enough for others to enter the race.  The favourites were Willie Whitelaw and the ‘mad monk’ Keith Joseph.

15 years later, Thatcher faced up to the former Environment Secretary Michael Heseltine in a fight to the death, with Heseltine favourite to beat a (now) unpopular PM.  Instead it was Heseltine who proved to be the stalking horse as when Thatcher pulled out of the fight, Major and Hurd entered the race with Major anointed as the stop Hezza candidate.

When Major resigned in 1995 to fight for his job, many speculated that there would be a stalking horse candidate again to knock Major out before the Clarke’s, Portillo’s and co would fight it out.  Instead John Redwood stepped forward with a lacklustre campaign that saved Major’s bacon.

When Major lost in 1997, the favourite was the former Chancellor Ken Clarke yet William Hague came through from the outside. In 2001, the shadow Chancellor Portillo and Clarke were again favourites only this time both were trumped by Iain Duncan Smith.  All of which brings us to Cameron.

Ken Clarke was going for his third attempt at leader, but David Davis was slight favourite.  Cameron was the rank outsider going into the race, his note less conference speech being the moment that catapulted him into the job.

So the moral of the story is to not focus exclusively on the favourites.  And keep your eye on Sajid Javid.
Posted by Allan at 10:00 No comments:

It's The Economy, Stupid...


Something that surprisingly bears repeating is the adage that the key battleground for elections in this country is the economy.  Every election going way back has been won on the election.  The same can be said of last years referendum too, where the failure of Yes Scotland to convince enough people to vote “yes” can be attributed to Sterlingzone and a failure to win the big economic arguments.

Those arguments re-surfaced again last week when the latest GERS figures were released, showing that expenditure was outstripping revenue by £2,328 per head.  On first reading it does look like a blow to supporters of Fiscal Autonomy. Even more so when the SNP deployed the ‘we would do things differently’ argument… without really explaining what they would do.  Given that 2016 will be the first Holyrood elections that will feature a fiscal debate thanks to the Calman recommendations coming into law gives the SNP an incentive to look at the finance side of things without adopting the “two in the bush”-isms of their love of Laffer style corporation tax cuts.

Do the GERS figures blow a hole in the case for Fiscal Autonomy, as has been argued here?  Well… no, not really.  For one thing, Fiscal Autonomy is the logical conclusion of devolution (Scottish solutions for Scottish problems and all that) and for another, well the GERS figures do not take into account the so called “tax gap” – the gap between the tax that should be paid and the amount collected by HMRC.  You would hope that Revenue Scotland would be better at gathering money than it’s UK level counterpart.

We would like to think that the SNP would be better at making the case for Fiscal Autonomy than they were with the economic case for Independence.  For all that the BBC have found themselves cast as the bogeymen de jour of pro-Independence supporters, the real reason for the no vote can be found in the SNP’s failure to win the economic argument. Oh and Sterlingzone.

Osborne has staked his parties’ fortunes on the economy, which is why there was the emphasis on the job being half done, on the work still to be done and on the dangers of leaving it to Labour.  Yet the figures in Osborne’s budget do not add up.  His claim that wages are coming back to pre-recession levels is something that is not being felt.  He has missed his deficit target, borrowing is still rising and the country still feels in recession.  That Osborne is still ahead in economic competence says more about the ineptitude and, frankly cowardice, of the two Eds.

Competence because Milliband (and Balls) have allowed Osborne’s arguments about the recession being the fault of Labour’s overspending (rather than their adherence to Laissez Faire economics, or as Brown rebranded it “Light Touch Regulation”) to become conventional wisdom.  Cowardice, because of Balls reluctance to formulate an alternative to George’s Scorched Earth.  It is this which has provided the room for the Greens and more pertinently the SNP to come and hoover up votes from people who do not agree that Austerity is working.

It is obvious that this election will feel like no other election.  That the conventional arguments about the economy have been replaced by a weariness of austerity is still to be added to the calculations of the main parties.  It could even be argued that the main parties still haven’t quite understood that stagnating wages have exacerbated the economic troubles rather than helped.  In the meantime the SNP & Greens seem to be making hay at the expense of those who claim there is no alternative to austerity.
Posted by Allan at 12:00 No comments: