The Death Rattle of The Third Way


In the aftermath of the European Referendum two weeks ago, we have seen the shock and fallout permeate the wider economy.  The Pound has fallen against the Dollar to levels not seen since the mid 80’s while the stock exchange has also fallen.  Rather revealingly guilts have also fallen, which may spell more economic uncertainty in the future.  It’s not just economically where certain stocks have fallen.  If you were a commodities trader, you would be selling shares in George Osborne and Progress. Fast.

George Osborne has been self explanatory, but in truth Osborne’s chances of succeeding Cameron were on the wane well before the disastrous Conservative ‘In’ campaign.  However it is the fate of the Labour Party which is capturing the imagination of the media and press.  In the immediate aftermath of the referendum, the Progress wingers among Labour’s shadow cabinet blamed one man for the referendum defeat – their leader Jeremy Corbyn.  It was his fault apparently that huge swathes of the former Labour heartlands in the north turned their backs on the EU.  There is of course one small problem with that synopsis – that only (according to Michael Ashcroft’s polling) 37% of Labour voters voted against their party’s advice.  Well behind the 58% of Tory voters who rebelled (and interestingly enough, nip and tuck with the 36% of SNP supporters). 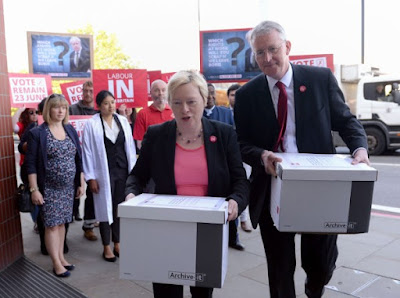 That hasn’t stopped the Progress wingers orchestrating a situation where a right wing coup would be the least worst option for Labour.  It is true that there are serious issues surrounding Corbyn’s failure to display any leadership skills, whether it is with his own party or in holding a disintegrating government to account.  It is also true that Corbyn, over the last 12 months or so has shown that he really is the best of a seriously bad bunch of opposition politicians.  Say what you like about the SNP, but they have been so much more of an opposition than Labour.  While the Progress wingers have a point about Corbyn’s performances, their utterly cack handed attempts to facilitate a coup/split (whatever their plans really are) have put the future of their party at risk and have almost single handed put the Union at risk.

The Progress wingers would have a point if their values and beliefs of a better version of Social Democracy was a popular ideal with real currency.  However over the past 18 months to 2 years, events have seen those ideals undermined and tarnished to the extent that we can certainly say that the age of Blairite “Third Way-ism” is now over.  Scotland provided the first signs that the Third Way edifice was cracking with the marriage of convenience between Scottish Labour and the Conservatives to set up the Better Together campaign.  Left wingers like Owen Jones point to Better Together as the reason for the collapse in Scottish Labour’s vote but don’t go further than Labour simply sharing platforms with the Tories.  It was Labour politicians, Labour activists and Labour leaders appropriating Tory attack lines & arguments – and happy to do so - which caused the penny to drop among “traditional Labour voters” rather than just simply sharing a platform.  Had Scottish Labour just modulated the Better Together message , made a left of centre case for remaining within the union, Scottish Labour would not have collapsed as it did.  Instead Scottish Labour revelled in the prospect of spending Tory money to beat the hated 'Nats', even if it meant using attack lines that would, within 9 months be used against them.

In that General Election the previously Blairite double act of Cameron & Osborne renounced their political heroes and announced manifesto pledges that would rip up Blair & Brown’s only positive political legacies – the rebranding of the minimum wage and the wholesale scrapping of Tax Credits…  Yip you did read that right.  Cameron & Osborne, lets not forget, took their cues from the Blair/Brown dynamic, taking notes and learning the lessons.  Given Cameron’s time in Downing Street has been one long (third rate mind) Blair tribute act, his claim to be the “heir to Blair” looks more like an attempt to consolidate the Third Way as a going concern for the Tory right.  It could then be argued that the Conservative/Lib Dem coalition was really the logical conclusion of Third Way politics in this country.  The conclusion of that coalition then provided an ending as the Tories then took the right turn they’d heavily trailed during the second half of the coalition.  If Cameron & Osborne were the true heirs to Blair & Brown in the first half of Cameron’s premiership, then by the time of the General Election, they’d certainly renounced that shared ‘heritage’.  In the firing line now were key Blair & Brown policies – The minimum wage, Tax credits and there was to be a referendum on the UK’s membership of the EU.

If the belief was that Britain was now a ‘centralist’ country, then that belief was swept away on the morning of the 24th June 2016.  The UK had voted to leave the EU, and the voters who had been left behind by the Third Way took their revenge on the political classes by spiking EU membership, wrongly blaming immigrants and freedom of movement for their many problems.  While you can blame Cameron & Osborne for failing to make a positive case to remain in the EU, the blame for the Northern heartlands voting en mass to leave lies squarely with the complacency of the Progress wingers.  Their calculation that left wing voters had nowhere else to go but Labour has now bit them in the backside twice in the course of 18 short months  Firstly during the Independence Referendum when scores of Scottish Labour voters plumped for Independence and have refused to vote for Scottish Labour again.  The exact same thing happened in England two weeks ago as Labour voters plumped for exit – though the right wing UKIP look like being the beneficiaries here.  Then again, what do you expect when the Progress wing’s idea of campaigning is to concede ground to UKIP by apologising for not listening to people’s concerns about immigration.  There is a reason why 3 out of 5 Scottish voters decided to vote for remain in the EU and it had more to do with the SNP’s own distinctive (separate and pro-immigration) campaign rather than the official Remain’s miserable excuse for a campaign.

We have seen voters turn against the values of the Progress wingers, but we have not seen why they turned against Progress values.  In the case of the last Westminster election, it was that Ed Balls signed up to Osborne-omics, hook, line and sinker very early on and deprived ordinary voters with no alternative.  In the case of Brexit, it is that living values – thanks to weak wages legislation and a minimum wage so far behind the living wage that you could, with considerable justification, describe the minimum wage as a slave wage – have crumbled since the start of the recession 9 years ago.  Elsewhere it is that Progress values are interested in only getting power, but not necessarily in standing up for people or raising living standards or any other choices that would put that power in jeopardy.   The release of the Chilcott report last week however provided the gravestone for the Progress Group.  Regardless of the other failures, there is one which towers over all other, slower burning, failures.  On that gravestone is the word Iraq.

As Ian Hislop pointed out on Question Time on Thursday night, a lot of the things that cropped up in the Chilcott report were widely known at the time but not reported my the majority of the press.  The lack of evidence that Iraq had deliverable WMD, the lack of post occupation planning, the rush to war…  all deep failures that have completely and utterly destroyed the credibility of certainly Blair, Hoon, Straw, Goldsmith & Campbell, but also a lot of pro-war cheerleaders. Cheerleaders who are the main anti-Corbyn ringleaders.  These include both Hilary Benn & Corbyn’s leadership challenger Angela Eagle (above). Awkward.

Taken as a whole, the Independence Referendum, The Westminster Election, the EU Referendum and the Chilcott report represents the death rattle of Blairite Third-Way politics in this country. Given that Labour’s incumbent leader comes from the left of the Labour spectrum and the two candidates for the Conservative party leadership represent the right of the Tory spectrum it looks very like we are in for a period of old style left versus right politics with the middle squeezed out.  This is, of course, except for viewers in Scotland where we have our own working version of The Third Way, where the divide is between pro and anti Independence.  On a UK wide level though, the Progress wingers inability to see the big picture unfolding in front of their eyes is causing damage to their party.  For the second time in a generation, they are willing to sabotage their party’s prospects at the ballot box just to make a point.  Unlike in the early 80’s though the stakes are much much higher as us Scots now have an exit door if the prospect of Prime Minister May becomes something more than a temporary measure, with no small thanks to the short termist bad politics of the original Party within a Party.
Posted by Allan at 16:00 No comments: