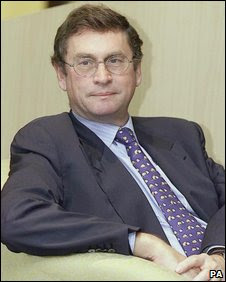 The announcement by Michael Ashcroft (right) yesterday has certainly elevated to the spotlight the issue of Non-Doms, and to a lesser extent Tax avoidance.  It has also lit up a fairly dull period of pre-election jostling, as accusations fly across the MSM.
The first thing to say is that Ashcrofts behavior has been unacceptable.  In trying to hide his true tax status for 10 years, he has shown disrespect to this country.  However, Ashcroft is not the only person to have shown disrespect to the normal hard working people of this country.  And at least he isn’t a hypocryte about it.
New Labour have their own questions to answer about Tax and Non-Doms.  Ashcroft and the Tories have pinpointed New Labour’s own list of Non Dom backers, including Swarj Paul, Ronald Cohen and Lakshmi Mittal (and others as Iain Dale lists here…).  What it does expose prehaps are the seasons for the mini arm’s race in the Autumn 2007 surrounding tax laws regarding Non Domiciled tax residents (or Non Dom’s) and Inheritance tax, the spat that lead to Brown finally ruling out an Election in the Autumn of 2007.  These people have a clear conflict of interest with the workings of government, yet no one bats an eye-lid.
New Labour have other skeletons in the tax avoidance closet though.  They have built upon the tolerance of tax avoidance, where this is the sin that is not mentioned in stark contrast to the countless public information films warning against benefits fraud.  The Tax avoidance department of most large accountancy firms is normally the first choice of most people who leave the Treasury, and to top it all we have the scandal of Mapeley Steps, the Bermuda based company who now own, and lease back, the office buildings which house Her Majesty’s Revenue & Customs.  Oh the Irony!  Added to the fact that Brown and Darling have obstipated the tax haven parts of the G20 settlements from April last year, despite trumpeting their part in cracking down on tax havens (Obama was the key driver for these agreements, not Brown).

Taken together we have the picture of a government not at all unhappy to see vital revenue not be paid for the upkeep of UK-plc.  We are not talking about pennies here either.  Estimates place 1/3rd of global GDP as being channelled through offshore tax havens, while in 2003, British corporations avoided paying £20,000 million in tax.  Today that amount would go some way to closing our deficit, tracking down that amount would be much more cost effective than the cuts which will come.

Yet the strange thing is, with all of this ammunition, the Tories and Conservative bloggers like Iain Dale and Guido are perfectly content to attack just the New Labour Non-Doms and…  well pretty much it.  So dear reader, who is more unpatriotic, a Tory wannabe grandee who avoids paying full tax by claiming Non-Dom status…  or a party who secretly have been condoning tax avoidance?
Posted by Allan at 20:59