Speaking of The Vicar… 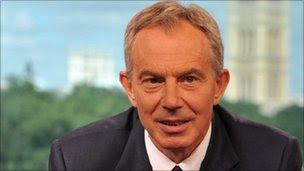 Amongst all of the hype and hyperbole around “A Journey”, there are in truth only really a couple of things that stick out.  Firstly lets ignore Iraq, because what else was Blair going to say on the subject (“actually, you were all right” – aye right).  The theory that we should try and bring to heel dictators somewhat missed the point that, invading Iraq when Al-Qaida are at the height of their powers is…  well removing another enemy of Al-Qaida and opening up another front for them.  The phrase “My enemies enemy is my friend” must have escaped the collective consciousness of Blair, Bush et al.

No, the most interesting things are about his relationship with Gordon Brown.  Blair’s analysis is that Brown had “no instinct at the human, gut level. Political calculation, yes. Political feelings, no. Analytical intelligence, absolutely. Emotional intelligence, zero." is an accurate description of the previous occupant of Number 10.  An excellent planner of events and policy, but lacking the nimble footedness and empathy with the voters, traits which Blair himself had in spades.  The absolute nadir of their relationship is said in the book to have occurred in March 2006 when Brown threatened Blair with an investigation if he did not drop the Adair report into pensions, this included a pledge to link pensions to earnings.  So much for Browns so called left leaning views, if he was so willing to use OAP’s as bargaining chips in his personal game of…  well chess isn’t really Gordon Brown is it?

Blair is also rather damning about Browns followers - “The curse of Gordon was to make these people co-conspirators, not free-range thinkers. He and Ed Balls and others were like I had been back in the 1980s, until slowly the scales fell from my eyes and I realised it was more like a cult than a kirk” – and also about his time as PM “never going to work”, quantifying that in various interviews, like here in the Guardian “By the time we came to the end I had a very strong view that unless Gordon absolutely kept to the policy agenda that we had by then devised – because we had a process called Pathways to the Future or something, which was a process that really tried to set out how you took New Labour to a new level – my view very strongly was that if he did that he would win and if he didn't he would lose. And by the time I left my general view was that he would probably depart from it and therefore lose.” I personally think that Brown’s time in charge is essentially 2 and a half years of chickens coming home to roost from the decisions made by Brown as Chancellor, maybe he should have started this “pathways to the future” programme, but essentially Brown lost because of the decisions he made as Chancellor which came back to haunt him as PM.

The other interesting thing to come out is Blair’s support for the policies being put forward by the Lib-Con government.  Blair was always the best leader the Tories never had, and always had advisers that used to be SDP people, so is anyone really surprised at this.  The really interesting quote, which is something i have argued for, rather than the ostrich approach adopted by other socialists in this country “What you can say is that you are withdrawing the stimulus too fast and therefore putting the recovery at risk. You can say that we would make these changes rather than those changes. You can say that actually there are better ways of reforming your public services to get the results that you want and the value for money. Say all of those things and you can be on a winning wicket. But if you simply say we're going to be the ones saying no, the public is going to say that's fine, but you're being unrealistic and we've got to deal with this.”.  I find it maddening that fellow socialists think that cuts are only an option to reducing the deficit, they don’t seem to understand the truth that Liam Byrne’s note that the money had run out was closer to the truth than many people would admit .  The best course of action would be to identify your own options for cuts, reducing the layer of middle management in the NHS, cutting the wages of over paid heads of service that kind of thing (oh and of course not writing off £6 billion in dropping your case against Vodaphone – i really hope someone starts to kick up a stink about that scandal…).

Of course Blair’s book is going to come across as “I was right, and this is why”, with that slightly pious tone which attracted the nickname of “The Vicar” in Private Eye.  We simply are not going to get contrition on Blair’s part over Iraq and Afghanistan.  Blair’s synopsis of how the coalition are getting on though is interesting, in terms of what the “progressive parties” should be campaigning for.  Blair has ensured that his is a voice that will be heard for years to come, despite being the head of a government that was not nearly as radical as he believes it was.
Posted by Allan at 16:59