A Spot Of Common Sense

One of the sure signs that an election is on is the proliferation of election leaflets.  Though there was a lack of leaflets for the European Elections two years ago.  Last years election did see rise in the amount of leaflets coming through the postbox at DFT towers, though it did not reach the peak year of 2007…  It has taken some time but the first election address came through the post last weekend, just before I headed off on a camping trip.  Quickest off the block this election was the Scottish Tories (see below). 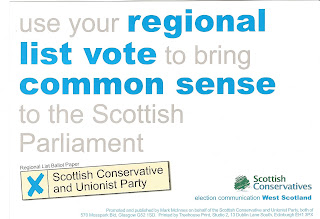 The front page urges the voter to “use your regional list vote to bring common sense to the Scottish Parliament”.  They list policies that they pledged 4 years ago – “Action on Council Tax bills”, “More police on our streets” etc etc.  Buy some sheer trick of fate – or rather their ability to support SNP policies that enable these aims to be put into practice (1000 more police officers, the four year freeze of Council Tax bills – after the collapse of the SNP’s LIT policy), these aims can be claimed to have been met.
Regarding the Scottish Conservatives aims for the future, there is no mention of the much vaunted plain speaking anywhere on the leaflet.  No mention of their policies on Higher Education, or any other policy.  In fact their selling point is their past actions.  Not a common sense move for a party still not forgiven for their actions over a period of 20 years from 1979 onwards.
Interestingly they have decided rather than to promote their policies, they have decided to promote their top two regional prospects – Parliamentary leader Annabel Goldie and Jackson Carlaw.  Rather like the campaigning that has happened so far, there is a feeling that any negatives are just not being spoken about (as you can gather, there is no mention of the Tories stance on Tertiary Education funding).  On the evidence of this leaflet, there is no evidence of either the common sense or plain speaking.
Posted by Allan at 17:00

Och well, at least they're not claiming the regional ballot is used to elect the First Minister.