Of all the reactions to the announcement of the date of the Independence referendum a couple of weeks ago, the most…  umm..  extreme has been from George “is right again” Laird, he of the “Campaign For Human Rights” blog.  His prediction is that Alex Salmond has announced the date of his “political death” with the date of the referendum.  While I think it highly likely that Scotland will vote no, Salmond’s political career will survive into 2015 and beyond thanks to one person. 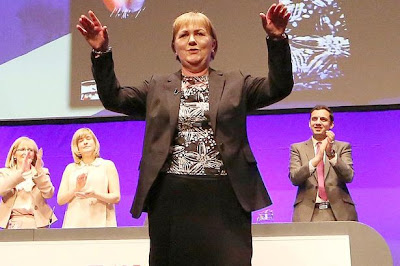 Like Thatcher was lucky to be opposed by a Labour party intent on seeing how many ways it could split up, and Blair was opposed by a Conservative Party intent on keeping the Thatcherite flame alive at a time it was utterly toxic in the British public’s eyes.  So Salmond is incredibly fortunate to have been opposed by two of the weakest “Scottish” Labour leaders in living memory.  Iain Gray seemed to oppose just for opposition’s sake, yet somehow did not have the presence of mind not to run away from anti-cuts protesters in Glasgow Central.  The cowering of Gray and co in Sub-Way’s Union Street branch essentially settled the 2011 Holyrood election.  The way things are going, Lamont’s just not going to be in the race come 2016.

I posted about Lamont’s infamous “Something for nothing” speech last autumn.  Even now I still can’t get over the sheer stupidity of Lamont attacking the SNP Government from the right.  Not only is there very little votes here for that kind of position, it also alienates people with a genuine grievance over the increasingly tight fisted benefits system in this country.  It also means that “Scottish” Labour have effectively boxed themselves out of the benefits debate, including the debate over the Bedroom Tax.  How?  Ask yourselves this question, how can a political party that has advocated an end to the “Something for Nothing” society credibly campaign against the Bedroom Tax?

If there was any political nous at the top of “Scottish” Labour (and it can’t possibly because Tony Blair has it all), Labour would have told their councils to write off Bedroom Tax generated debts.  They would have had a ball over Salmond’s grandstanding over renewables.  The biggest inroads would have been made though over justice – MacAskill’s cuts to the Legal Aid budget mean that people with a disposable income of just £83 a week have to pay for legal representation.  For a party that used to pride itself on standing up for the poor no not raise a whimper at this issue is disgusting.  But then again, Lamont probably thinks that, like MacAskil, there’s nothing wrong with Scottish justice so anyone on trial is guilty anyway.

Where Lamont has been lucky has been with the referendum campaign.  Had most of the attention not been on Yes Scotland’s lacklustre and frankly amateurish campaign (not helped by some amateurish posturing by Salmond & Sturgeon), then Lamont’s utterances would have put her in more trouble.  Firstly Lamont had wanted a review of powers for Holyrood, adding the caveat that there would be a look to see if powers could be taken back to Westminster.

This weekend though, things have started to come apart for Ms Lamont.  Her party’s devolution commission has recommended that Income tax is devolved to Holyrood.  While this is a sop and falls way way short of the full fiscal autonomy that should be on the table, even this step has met resistance with not very many Scottish Labour MP’s greeting this proposal with open arms.  Neighbouring MP (and shadow defence secretary) Jim Murphy is said to be one of those unhappy at the proposals.

Lamont’s jump the shark moment though was the interview on Friday morning on GMS.  She did not answer the question, put several times by Gary Robertson, of whether she had spoken to Ed Milliband about the proposals.  Then came the questions about the Better Together financial backer (and Tory donator) Ian Taylor.  Lamont ignored the questions about whether Better Together should give back the money, not even registering the quote from John Mann about Ian Taylor’s previous donation to the Conservative Party being “Dirty money”.

John Mann is a left wing Labour MP, so in theory should be on the same side as Lamont.

Within Lamont’s phaffing about starting some sort of debate (that really should have been the one that took place when the pro-Union parties instead decided to come up with Calman), the realisation dawned that not just that “Scottish” Labour are not going to win in 2016, but that Lamont this far out from that election is a lame duck leader.  There’s the rank bad strategic mistakes, the poor communication skills and the distinct lack of cast iron policies coming from whoever is doing Lamont’s thinking for her (oh and we do not need some sort of NHS watchdog, we need better standards and properly accountable NHS boards) .  As for Friday, no offence, but if you are being mauled to pieces by Gary Robertson then really you should give up politics.

The reason why Lamont will stay in her position is that there is no outstanding candidate ready to take her place.  Tom Harris thought that he could go the Salmond route, without realising that he doesn’t have either the personality or the popularity of Salmond (being a strident Blairite, still not that popular a stance in the Scottish party). Ken McIntosh is still very much an unknown quantity despite being John Swinney’s shadow. Jackie Baillie…  seriously?

In the event of a vacancy, there are two outsiders that would be worth considering.  Kezia Dugdale will see her stock rise in future years, however the person I think that might be one to watch would he Hugh Henry.  He was part of the furniture when Labour ran the…  ah..  Scottish Executive, holding deputy positions under McLeish and McConnell before becoming Education Secretary.  He does have the experience, the big question however is whether he could take “Scottish” Labour to where it should be in order to challenge the SNP.  Whatever happens, “Scottish” Labour needs to recognise the oncoming catastrophe that is heading its way and take steps to avoid it.  Starting with the removal of their current leader.
Posted by Allan at 11:00

You should, if you have the time ask Nicola Sturgeon, is George Laird ever wrong on calling elections.

To help you out, I told John Mason currently an MSP that he was in danger of losing his Westminster seat, twice, as he wasn’t doing enough.

And to help you out, one of the times was during the 2009 European election, I first warned him six months before that, if memory serves.

If telling the truth is extreme, then perhaps you should develop it.

Did I not state that Team Sturgeon prior to 2012 Glasgow council election was going to fail?

Was I proven correct?

If I can do it, then surely you should take the time and look at politics more closely.

Then perhaps you will see what I see.

Scottish independence is dead, the campaign is over; it is a face saving exercise now.

Previously I said SNP would not win Glasgow Council; then they would lose indyref, followed by poor performance in Westminster General Election.

Their only hope is the Lib Dems continue to see their vote collapse. Imagine having to count on the failure of others as a sign of your ‘popularity’. Regardless the SNP will not win a majority of seats.

You may also if you read my blog regularly remember I said that Ken Macintosh MSP should be Labour leader.

And I did blog that the worst candidate would win the Labour leadership prior to the result.

Remember me blogging on the Joyce Juszczak case?

I said the woman should be given the drug, Nicola Sturgeon did the photo op and left her in the lurch.

It could be that I am just incredibly lucky at getting the right result when others can’t, but I am sure that you don’t believe in luck.

I agree with you that Johann Lamont is a liability but as the old saying goes, she isn’t my problem.

As to Salmond, post indy, he should go, he has dragged down the SNP into a festering nasty poisonous clique with his ignorant jolly fat man routine.

Thank you for the write up in your blog, however in future could you put: ‘The Campaign for Human Rights at Glasgow University.’

Hi George, you see the thing is I think that Sturgeon is going to listen to you more than me.

The points I was making is that, firstly you can't really claim to be right when there's more than one person coming to the same conclusions that you are. I had said last October that this referendum was lost for the SNP/Yes Scotland ("Why Scotland will Vote No in 2014"), and i had also thought last spring that the electorial tide was begining to turn against the SNP (Is the SNP Backlash Coming"). As for Sturgeon's suitability for the job as Salmond's sucessor, i did make the point that the position of the anointed one has an unhappy history ("A Potted History Of The Anointed One's"). So much so that you might as well be writing the political obitiaries if Sturgeon gets the job.

The second point is that I think your post was extreme because I don't think Salmond will go in the wake of a "No" vote. I think he will carry on and that here will face only feeble pressure from Lamont & Co. She might have ben the weakest of the three candidates, but there was not one outstanding candidate there when she was elected. If anything, she has performed far far worse than I thought that she would.

Things could change, but I don't see Lamont puting anywhere near enough pressure on Salmond to force him out of his position as FM post a "No" vote.

George's delusions of adequacy are always entertaining. John Mason's by-election win was always going to be a temporary protest - the notion that allegedly being insufficiently busy as an MP turned Glasgow East around by FIFTEEN THOUSAND votes in the space of two years is just hilarious.

Similarly, a dog in the street could have told you the SNP wouldn't take Glasgow Council last year. It was starting from a position of something like 47-22 behind, and while perhaps it could have made a little more progress, "predicting" that it wouldn't win control is a bit like predicting Bayern Munich would beat Annan Athletic: of course they will, idiot. If you want to impress me, tell me the exact score.

"His prediction is that Alex Salmond has announced the date of his “political death” with the date of the referendum. While I think it highly likely that Scotland will vote no, Salmond’s political career will survive into 2015 and beyond thanks to one person".

That is why the SNP read my blog.

George Laird
The Campaign for Human Rights at Glasgow University