Ummm…  that Groundhog Day thing I was talking about in my last post. 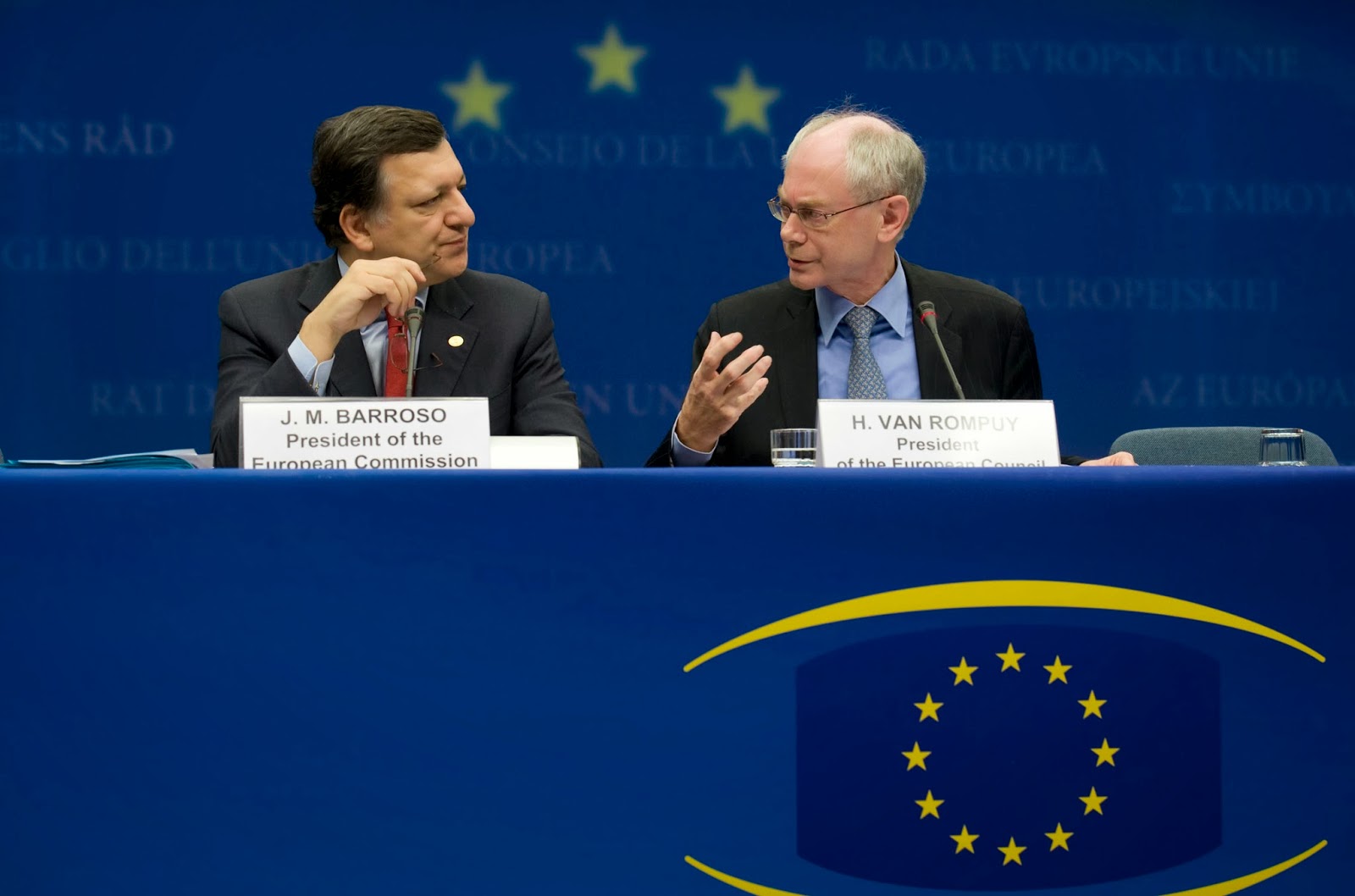 If it’s not Sterlingzone, the issue that the pro-Unionists have the Indian sign over the pro-Independence supporters (or to put it another way, the other issue the SNP/Yes Scotland have made a royal bollocks of) is the European Union.  Specifically the claim that as existing members of the European Union, we would pick up the equivalent of the pass GO and collect £200 and become full members of the EU upon a vote for Independence.  Lets not let the fact that the membership forms have the United Kingdom’s name and signature’s over it get in the way of the SNP’s wheeze.

And a wheeze is what it is.  At the weekend, the BBC, for the benefit of people in England who haven’t been paying attention, once again wheeled out the president of the European Commission Jose Manuel Barrosso (above, with European Council President Van Pompuy) to state that an Independent Scotland would have to apply to become members of the European Union.  And not only that but that it would be difficult for them to be accepted as there would be countries who would veto their application (Spain, Germany and rUK would be the three main suspects).

Students of history would know this scenario well.  It took the UK the best part of a decade to be admitted to what was then the Common Market.  France (in the shape of De Gaulle) vetoed applications from MacMillan and Wilson before Edward Heath succeeded.

The bigger issue regarding the EU though is that this shows the disingenuous side of the SNP.  They are seeking for Scotland to exit a union with three other countries where we have limited influence and are looking to take Scotland into a bigger union where we would have even less of a say in the direction of travel of that union.  Previously, I’ve dubbed this the Winton Paradox after the Planet Politics blogger who initially spotted this flaw in the Salmond Plan.  If the furore over Sterling-zone has blinded Salmond to the fact that Carney’s speech didn’t torpedo Sterling-zone but his flagship 10% Corporation tax policy, then the furore over EU entry has obscured the fact that the EU ain’t the cuddly protector of workers rights it was when Jacques Dellors was its figurehead.

One of the more interesting campaign shifts has been Yes Scotland’s claim that a yes vote will mean no more Tory Governments.  This in itself is a hostage to fortune as sooner or later a centre-right successor party to the Conservatives will triumph in an independent Scotland one day.  More pertinently though is the bogus claim of no more Thatcherism that we didn't vote for.  Does that include the Thatcherism smuggled in by the European Union?

I’ve blogged before about Sturgeon’s sneering assault on Euroscepticism as “Little Englanders” by pointing out that Tony Benn and Peter Shore (prominent members of the Wilson & Callaghan governments) lead the No group in the European referendum in 1975 – as far back as 1963, Benn spoke about the Treaty of Rome as entrenching “laissez faire as its philosophy and chooses bureaucracy as its administrative method”.  There is also ignorance here as well.  The outsourcing of the Scottish ferry network was down to an EU directive, while there is a directive (91/440) that would make it unlawful for a future independent Scottish government to re-nationalise Scotrail.  While the Lisbon Treaty, yes that Lisbon Treaty hated by much of the modern Conservative Party, promotes the privatisation of Public Services. The old jibe about Europe being a club for business remains, it’s just that the institutions have had more names than Selafield.

As if we didn’t know it, the gloves are well and truly off in the fight for the union.  The irony is that as soon as there looks to be a momentum shift for the Yes camp, Better Together has targeted the SNP’s major weak spots.  As I’ve said before, unless Yes Scotland address the currency issue and the Winton Paradox, a no vote is a near certainty as these issues are the gifts that just keep giving.
Posted by Allan at 12:00