The Referendum Story So Far...


With the European Elections now done & dusted, with the Newark by-election and the final Queen’s speech of this parliament coming up today, all attention can now focus on next years Westminster Election…  except for viewers in Scotland where there is the small matter of the Independence Referendum in 16 weeks – with the official campaign now underway. 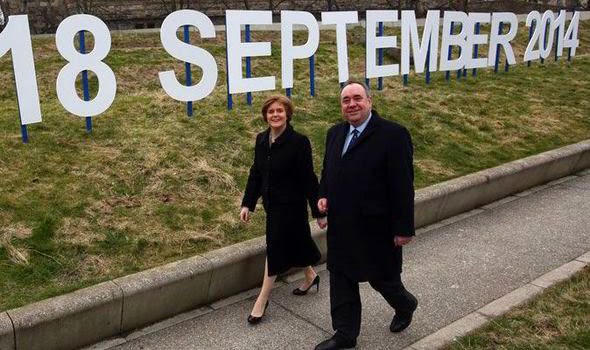 The irritation at the referendum is at the mild stage at this moment, however depending on how the vote goes, you can see that irritation growing.  This is why the main Westminster parties are lining up to upgrade the powers Holyrood has.  Preferably I would have liked them to have done this because they realised how much of a balls up Calman was but ho hum…

For people fresh to the referendum, the campaign can be divided into two parts. The first part lasted from the start of the campaign until the Scottish Government unveiled their White Paper.  In that part the No Camp had a very strong lead, while the pro-Indy Yes Scotland looked weak.  There were several reasons for this.  The launch of Yes Scotland itself did not catch the imagination at all, while the SNP made several poor tactical decisions.

Sturgeon’s assertion that, despite all of the application forms being for the United Kingdom,  Scotland would be (or as she put it “remain”) in the EU with all the T’s & C’s currently enjoyed by the UK has quite rightly been dismissed by most parties.  Most people accept that I-Scotland would have to submit it’s own application and negotiate it’s way into the EU, yet the SNP are insistent that we would carry on being a member “as we have been for the past 40 years”.  I’ve said before the common sense line here would be for us to aspire to be a member of the EU but that the choice would be for the Scottish people.

Similarly, the SNP’s idea of a “Sterlingzone” had attracted derision for most of last year, with claims that currency unions do not work unless there is some sort of fiscal pact – one which would drive a coach & horses through Swinney’s claim that independence would enable Scotland to have all the powers of a normal country (presumably he forgot to mention that it would also allow Scotland to surrender some of its powers like any country as well).

From the infamous launch of Yes Scotland at Cineworld Edinburgh onwards, that was the pattern.  So what has changed?  Towards the end of last year, the polls started to show a drop in support for the union.  However about the time of the unveiling of the White Paper, the polling figures for Yes Scotland started to go up.  This tightening of the polls is still marginal – 1 point here, another here – but there is still tightening.  Pro Independence supporters getting on to the front foot has helped (alongside the publication of the White Paper) but the biggest factor has been the mistakes made by the Better Together camp.

The starting point was the dismissal of the White Paper before anyone could be able to get through even the edited highlights.  It’s not as if Darling & co had advance copies like Robin Cook had of the Scott Report (into the collapse of the trial of the Matrix Churchill four).  The turning point though was Osborne’s “Sermonon the Pound” (© Iain McWhirter 2014).

The message might have been that r-UK will not enter into a currency union with an independent Scotland, but it was delivered in such a cack handed style that reeked of attempting to bully the Scots into voting no.  It was also a message that was only delivered at that point in an attempt to put the referendum to bed early so that the Westminster parties could concentrate on the main prize – the keys to Number 10.  It did not need to be delivered at that point.  Portillo on the BBC’s “This Week” described the statement as “Economically sound…  but bad politics” & was spot on in doing so. That Balls & (Danny) Alexander backed Osborne’s stance looked even more like an attempt to bully Scotland into voting no.  Personally, I’m mystified at their stance.  Any accompanying fiscal pact to Sterlingzone would enable r-UK to limit certain taxes (which would mean an end to Salmond’s Corporation Tax pledge) and have a direct influence on the fiscal policies of a direct competitor.

That the Osborne/Balls stance lasted all of 7 weeks shows how short sighted their arguments were in the first place.  Yes, they are sticking with that stance but their credibility has been shredded thanks to “Deepthroat” (funny how we’ve not heard who that source is).  Since then we’ve had Labour re-iterate their agreement with Osborne over austerity and also seen them strive to be tougher than the Conservatives over benefits – all policy manoeuvres designed to win them votes for the Westminster elections but having the possible effect of undermining the message that we are Better Together.  Still, at least we have a Prime Minister that will move “Heaven & earth” to defend the union against those unruly separatists…  er… as long as it doesn’t interrupt his chillaxing of course.

When I originally called the referendum for “No” in 2012, I didn’t envisage that the “Better Together” camp would be as useless as “Yes Scotland” had been up to that point, though to be fair “Yes Scotland” didn’t indulge in foot shooting as sport.  I still think that Scotland will vote “No” though it won’t be as comfortable as it would have been had Better Together not lost the plot.  As we enter the final laps, the pro-Indy supporters may have the momentum, but still have it all to do to win the referendum.