A Tale of Two Debates


So, yesterday, the day of Salmond and Darling’s second debate right?  Well early on Monday I heard that Paisley’s TUC had arranged a referendum hustings for that night.  So off I went, well you know I like a bit of a heated debate… 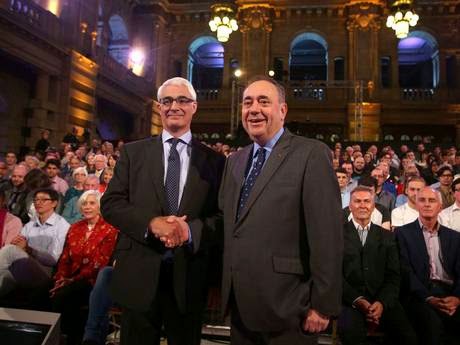 For Independence was the MSP for Paisley George Adam, for staying in the union was the Paisley & Renfrewshire North MP Jim Sheridan.  I wasn’t quite sure which of the other two people on the panel, the PCS Union’s Fiona McDonald and Clydebank Trade’s Union Council’s Tommy Morrison, sat on the issue.  I did think when Ms McDonald gently put forward her arguments for Independence that Sheridan was on his own regarding being pro-Union.  However when Mr Morrison started his opening statement it became clear that he was pro-Union.

What was interesting about Morrison was his euro-scepticism.  His arguments were the arguments that long time readers of this blog will have seen before.  Morrison as well brought up the TIPP trade talks between the EU and the USA, Morrison’s fear being that TIPP would open up our public services to privatisation in the event of a “Yes” vote.  Allied to his euro-sceticism, Morrison’s main argument for voting no was that this would not help the ordinary working man.  Morrison brought class into the argument, and to me that seemed rather crass.  Especially as, I think it was Fiona Morrison that pointed this out, it looks like those most likely to vote yes are people with nothing to lose.  Those people who go to foodbanks, with no mortgages, with very little currency (whatever that currency is).  Certainly the outbreak of windows in Glenburn with “Yes” posters bears this out.

I’m not really sure what to make of Jim Sheridan.  On the one hand he does come across as an old style Socialist.  Certainly tonight he was more critical of the Blair years than I’ve heard before, maybe that’s the frustration at the Unite scandal coming out.  On the other, he wasn’t that convincing regarding being pro Union.  I suppose, given that Milliband would be his vote for Labour leader 4 years ago, he is optimistic that he will be PM this time next year.  I just don’t get his optimism.

At the last hustings meeting I was at, the SNP were represented by Derek MacKay.  While George Adam wasn’t quite as smooth as MacKay, that actually was no bad thing.  He sort of handled the grenade that I lobbed into the debate.  Yup, you’ve guessed it  - Sterlingzone.  He did press the anti-Austerity/anti-Westminster, or as it could be argued turning the referendum into a vote of no confidence vote on Westminster, arguments successfully – which if you’ve read my last post I agree with.

Most impressive though was the PCS Union’s Fiona McDonald.  Her arguments echoed Adam’s arguments relating to the failure of the Union.  McDonald was also critical of the SNP’s policy relating to Corporation Tax and other aspects of the SNP’s “MacNewLabour”-isms.

While the Paisley Methodist Hall debate was a cordial affair with the odd stramash.  Things were completely different at the big debate on National (and International television) at Kelvingrove Museum & Art Gallery as Darling & Salmond slugged it out.

The first debate two weeks ago saw Darling win a bad tempered debate essentially by pressing Salmond on his plan B in the event of Sterlingzone not coming about.  I have suggested that Sterlingzone & the EU were the gifts that kept on giving until Salmond managed to square that circle.  Well, last night the well ran dry.

After the opening statements (Salmond’s was better, Darling’s would have been good were it not for the Better Together message being consistently undermined by the Westminster government) Darling brought up Sterlingzone.  Except this time Salmond was ready & sort of announced a policy shift of sorts.  I think.  Plan B it seems is that, well the Scottish Government don’t have a Plan B.  They have several options, which they want to keep open.  This isn’t politics, this is big business and there is no place in electoral politics for this type of macho posturing and pre-negotiation.

Darling went for the Sterlingzone issue in the economy section, yet should have kept it for the currency section.  He was probably thinking that it would be a repeat from two weeks ago.  Except Salmond’s assertion that he was seeking a mandate from the voters to negotiate Sterlingzone seemed to unnerve Darling.  Rather than overplay his hand on Currency, maybe Darling should have also attacked Salmond on the policy position regarding the EU.  Darling looked ineffective during the section on oil, while Salmond went to town on making the case not for independence but for a no confidence vote against Westminster.

Pro Indy supporters probably think Darling made a slip by saying that Scotland could use the pound (or whatever currency we choose).  That’s never been in doubt – what Osborne, Alexander & Balls are against is the Sterlingzone currency union which is different from what Darling conceded could happen.  It is disingenuous for pro-Indy supporters to suggest otherwise – as they have done.

Salmond’s slight shift vies-a-vie Currency Union and also the change of tack regarding attacking Westminster’s social policies over the last 20 years clearly won him last night’s debate.  In truth though, the BBC debate was all heat and no light.  More information came with the debate in Paisley, which brought up issues not touched on in Kelvingrove.  The EU, TIPP, workers rights & the constitution were issues that came up in Paisley.

Regarding the BBC debate, whether Salmond’s win translates into higher poll ratings for Independence remains to be seen.  What is sure is that the next set of polling will be eagerly anticipated and will determine whether Salmond’s win has provided the bounce the Yes camp desperately need.
Posted by Allan at 13:00