I don’t really tend to do I told you so posts.  I had in mind a post for if Scotland voted no putting reasons as to why Scotland voted No but couldn’t bring it to fruition.  It is obvious though that since the posts I wrote in 2011 and 2012 about Milliband’s performance as Labour leader, things have…  er… developed. 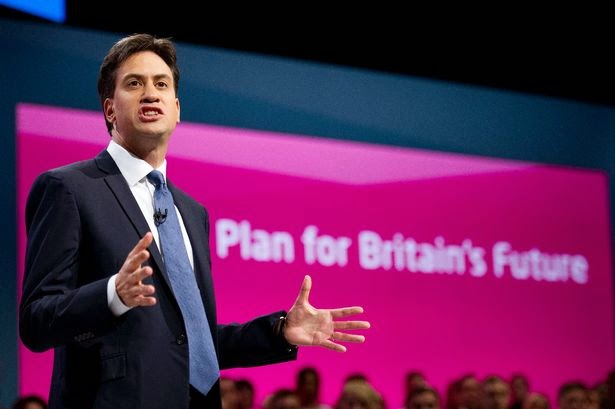 The first of these posts – “The Miliband Drift” – pinpointed Miliband’s carefully crafted tightrope walking act in trying to appease the Blairite tenancies that still form a large bulwark in the Labour hierarchy.  The decision not to formulate a viable alternative to Osborne’s Scorched earth policy of cuts has since that post boxed Labour into accepting these cuts as fait accompli.  We can blame Balls for many things, but Milliband should really have hit the ground running on this issue.  Lets not forget as well that Balls was not Shadow Chancellor when the Shadow Cabinet were faffing about – it was the King over the water “Uncle” Alan Johnsone and his Economics for Dummies book.

What has undone Miliband though is not the swing votes or the continual threat from the Blairite Progress wing of Labour but his continual pandering to the Progress wing has pushed many labour voters away.  Oh and that referendum.  The referendum bounce has not gone to the parties that backed the winning side – the Conservatives or to Labour.  The referendum bounce has gone to the SNP – the leading party on the losing ticket – with polls suggesting a whole tranche of Labour seats are at risk at the next Westminster election.  If this was to happen, Labour’s Scottish heartlands will have really turned their backs on Labour – remember that there’s only three Labour seats within a swing of 10% to the SNP but there’s a bunch of 20 seats around the 12-18% swing mark so for the SNP to reach this cluster of seats must signify a collapse in support for Labour.  A collapse that current polling suggests is happening.

Labour’s biggest problem post referendum is recognizing that Scotland has changed and that desire for change is not going to go into any box, or be sated by the crumbs promised by a still Blairite Labour party.  How this square’s with a party that wants to focus on winning the swing seats it needs to win to push their party into government is anyone’s guess.  What it does do is torpedo under the waterline Milliband’s alleged 35% strategy – the strategy of winning by just appealing to core voters and to disaffected Lib Dems.

That second post about Miliband now looks like a harbinger of the Labour strategy for keeping the union – unreservedly stand shoulder to shoulder with Cameron, Osborne, Clegg & co and not even bother to think about the consequences, or any viable alternative that would play to the settled will of Devo-max (but not full Independence) supporting voters.  Iain McWhirter in his column in the Sunday Herald called last week the moment Miliband lost the election (though McWhirter lays the blame more at the feet at the dissenters than Miliband).  I think it was obvious as far back as that post in 2012 that Miliband would not be the next occupant of No 10 – though those caveats do include UKIP & their performance.  His inflexibility and inability to think on his feet is a huge minus.  He reminds a lot of Brown – a thinker that unfortunately does not have the requisite skill settings to be a leader.

So will Miliband’s removal be the silver bullet for Labour’s ills.  Well, maybe.  Certainly a more New Labour figure could play well in England.  However this figure would exacerbate Labour’s position in post-Indyref Scotland and would make it an awful lot easier for pro-Indy supporters to hang the “Red Tory” label on Scottish Labour.  Of course, “Tartan Tory” would be a much more damaging epithet.  One needs to look at the polling figures of Murphy to see what a right of centre Labour leadership would do to Scottish Labour.  Miliband might be lots of things, but a cursory glance at the shadow cabinet shows no obvious successor.

Ed Balls is still universally reviled for his part in the last government, so any ambition to lead is tempered by his unpopularity.  His wife Yvette Cooper would probably be the favourite in any leadership contest but would still be seen as someone from the right.  Both Reeves & Umuna though – also considered contenders – would be disasters at this stage (Umuna just doesn’t look leadership material full stop).  Conspicuous by it’s absence would be wee Dougie.  He however is being lined up by supporters of Ed to be the scapegoat for when things go wrong.  All of which leaves Andy Burnham as the flag bearer for the left.  Except his left wing credentials tend to gloss over his part (alongside another No 10 staffer James Purnell) in spiking Tony Banks football taskforce and partly being responsible for the development of ID cards.

For better or for worse, Labour is stuck with Milliband until the election.  Those malcontents on the back benches can congratulate themselves on pretty much ensuring Cameron’s second term as PM.  Then again, us Scots could have warned the rest of the UK about the red Tories in the midst of the Labour party.
Posted by Allan at 11:00