The Art Of Learning From Your Mistakes


Friday was of course the first anniversary of that referendum.  In the run up to it, we have had all manner of reminiscences about what happened last year.  Fine if you are seriously nostalgic about events from the near past, but tiresome if like me you’d prefer your history programmes to have some sort of distance.  The referendum is still to raw for people to really get some perspective.  For me, the day itself was about getting away from it all, so I voted early then took myself off to the pictures. 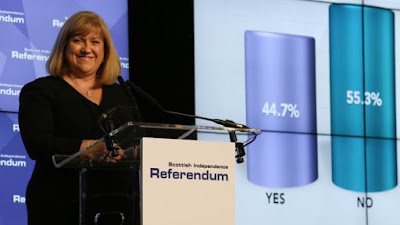 One of the things that has been raised is the prospect of a second Independence referendum, the whys and why not has been looked at here.  I’ve previously said that a second referendum was pretty much inevitable, given the result and also Cameron’s ‘business as usual but we’ll look at English Votes for English laws’ speech barely an hour after the final result was announced (pictured above). That’s not to say that it should be straight away.  However one of the reasons for not having a second referendum within the lifetime of the next parliament is the distinct lack of a post mortem from the SNP regarding their failure to carry the country last September.  It’s this lesson that the SNP are showing no signs of learning from.

Over the last month or so, the reasons given by the SNP for the loss have ranged from railing against the media bias against Independence to the now notorious “The Vow”.  The former First Minister, Alex Salmond, has been most vociferous in attempting to pin the blame on the media and the Vow, all of which ignores the fact that Salmond himself had a decidedly mixed referendum campaign.  It was Salmond who championed the millstone around the pro-Independence campaign – Sterlingzone – and became more dogmatic about that policy the more criticism was heaped upon it.  It was also Salmond who spoke the most about the behaviour of the BBC, whether it was Nick Robinson’s strop at a press conference or the BBC report about RBS.  It was however a collective SNP leadership failure to successfully rebut The Vow.  It may have been the stories about companies leaving Scotland if we voted no that set the template, but the SNP’s retreat into “scaremongering” betrayed a tiredness and an irritability.

So if there is to be a second referendum, the SNP really should be looking at what went wrong for them as well as the things that went right.  Sterlingzone killed them in so many ways, not least because it blocked the SNP from even discussing their vision on how an independent Scotland could be economically viable.  Smack, brick wall right there.  I’m also probably alone in thinking this, but the SNP’s spin operation I thought came up short in those crucial final days as Salmond, Sturgeon & co tended to overuse the word “scaremongering”.  Concise, clever rebuttals were needed and were not forthcoming.

All this is something for a future where the UK Government and pro-Union politicians here in Scotland ignore the lessons that they need to learn from last September.  Chef amongst those being that the final result of 55% to 45% (rounding up/down) does not represent the overwhelming vote of confidence in the Union that those politicians blithely assert.  Had the referendum been won by the figures suggested by the polling when Yes Scotland launched its campaign in May 2012, then the 70%-30% victory would have settled the debate for generations.  Instead, the people of Scotland have decided to stay within the union but this is firmly on a trial basis.  To extend Douglas Alexander’s “divorce is an expensive business” analogy, both sides would be at marriage counselling trying to keep a failing relationship from complete collapse.  Yet Cameron, Mundell, the Westminster parties and the pro-Unionist politicians are behaving as if it was business as usual and that the union has been saved.

Nowhere is this more evident than in the perception of the new powers being offered to Scotland.  Social Security powers have not been proposed to be transferred en bloc.  There will be no Full Fiscal Autonomy.  If anything, Smith looks more of a fudge than Calman.  So far, so predictable after Gordon Brown’s casual referencing of touchstone Scottish Dates.  St Andrews Day, Burns Night were all used as deadlines, presumably March 1st was given a bit of a steer.  It all sounded too slick and too well designed to push the buttons of waivers that I smelled rotting fish straight away.  In spite of SNP orthodoxy though, the next referendum won’t be caused by Brown or the notorious ‘Vow’ but by the current occupant of Downing Street.

As long ago as the Edinburgh Agreement, Cameron could have stiffed the Nationalist’s short term ambitions by agreeing to that second question.  Had he done that, Devo Max would have won and independence would have been off the table for a generation, perhaps more. I’d suspect as well that Cameron’s cowardice in not making any meaningful contribution to the pro-Unionist cause harmed the union as well.  After all, if the leader of your country can’t be bothered to defend the existence of your country, well…

Cameron’s biggest mistake though has been his reaction to the referendum result, believing that a win is a win and the green light to carry on as if nothing has happened and that there is no consensus-building to be done.  His speech minutes after the official referendum result reopened the door to independence that had been closed pretty much since Clackmannanshire declared at about quarter to 2 in the morning.  Cameron’s latest bout of treating us like his forefathers would treat the colonies was the announcement that there will be amendments to the Smith inspired Scotland Bill – one of which being an amendment making Holyrood a permanent fixture in the UK government architecture…  three months after his party voted down the same amendment from the SNP.

Labour are all very quiet about this, but then again they have lessons of their own to ponder and learn from.  Their own conduct during and in the immediate aftermath of the referendum, where their hierarchy were too cosy in working with the conservatives and too happy to parrot conservative attack lines at the SNP/Yes Scotland, provided a realization for many Scottish people of how close to the Tories New Labour have become.  Better Together has in essence become Scottish Labour’s own Poll Tax moment.  Not the finest moment to hand the reigns to the most inexperienced figure ever to be anointed the figurehead of Labour in Scotland.

A year on from the referendum, there are reasons why both sides have not come to terms with the result and it’s aftermath.  For the SNP they need to come to terms quickly if the dream is not to die.  For the pro union parties, they need to learn the lessons to ensure that there is not an unstoppable demand for Independence.  Both sides though are showing every sign of carrying on as normal.
Posted by Allan at 17:00