The Sinking Of Gideon


This week sees the proposed date that, had Scotland voted a different way we would have become an Independent country, if you believe that those negotiations would have been brisk, swift and fruitful and not become bogged down very quickly.  I suspect that, like a couple of weeks ago, the GERS figures estimating a Scottish budgetary shortfall of £15bn will be common place within social media and the news. 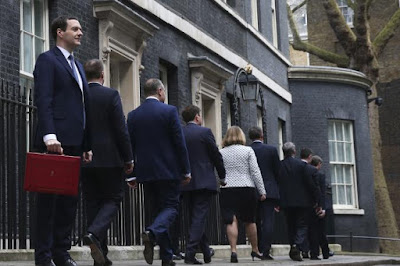 The fact that the £15bn has been racked up by a body with very little powers regarding the raising of revenue (the ability to raise or lower income taxes by 3% either way seems quaint by comparison to the Smith submissions) seems to have bypassed most of the Scottish Media.  Indeed as sticks to beat the pro-Independence supporters go, it’s not the best stick to choose.  This would be a potent weapon to use against pro-Independence supporters if the UK economy was being run properly and we were genuinely better together.  Nowhere was this more evident than with last week’s Budget statement, a statement which looks more and more disastrous for Osborne than the notorious Omnishambles budget.

For someone who has been influenced by the Blair/Brown dynamic, you would have thought that Osborne would have noted that what eventually undid Brown the Prime Minister was the homecoming of the Chickens he set free during his time as Chancellor. Apparently not as Osborne blithely set about his favoured game last week of setting traps for the opposition and talking of hard choices etc etc etc.  The policy of a sugar tax did catch the eye of many people on the day, as did Osborne’s bashing of the SNP when announcing tax cuts for the oil industry.  There were five moments in that speech which spell the end of Osborne: The Heir Apparent.

The most obvious moment, at the time, being the less than good economic figures unfurled by Osborne.  True, as a country we have never resolved to fix the issues in the economy which led to the Credit Crunch/Banking crash from 2007 onwards.  This has not been helped by a political system which still places a priority on home ownership and increasing house prices.  Having said that, Osborne has at least recognised one of the issues holding the UK back – stagnant wage increases – and has attempted to rectify this.  Even if the resultant new ‘National Living Wage’ is still below the actual living wage.

The poor forecasts announced by Osborne meant that 10 months on from last years election, Osborne will not hit his targets for debt in this parliament, with the GDP share forecast to be 77.2% at the time of the next election.  Borrowing forecasts have also been revised upwards by the OBR, up to £55.5bn (+£5.6bn), £38.8bn (+£14bn) and £21.4bn (+16.8bn) in 2016-7, 2017-8 and 2018-9 respectively.  Growth figures have also been revised downwards, as the global economic climate is forecast to take a downward turn.  Those figures do not suggest a man fit to be chancellor.  It’s so bad that it's enough to make you pine for the days of Irn Broon.

It is the second moment, coupled with the others that have lit the blue touch paper, typed without any irony whatsoever. It is the plans to cut Personal Independence Payments, the successor benefit to Disabled Living Allowance, which has been the straw to break the camels back for many Disabled rights campaigners, coupled with cuts to Corporation Tax and Capital Gains Tax.  The latest attempt by Osborne to go to the well of Benefits cuts has backfired big style.  More so since the resignation (which may or may not be influenced as well by the upcoming EU referendum) of the Work and Pensions Secretary Iain Duncan Smith.

That resignation and the bitter aftermath appears to have split a party that a couple of months ago was still in the full glow of the honeymoon period of this government.  Smith’s resignation letter laid squarely the blame at the Chancellor.  His phrase that the “salami slice” of welfare cuts were a “compromise too far” has deeply damaged the Chancellor, torpedoing not just his leadership hopes but has cast serious doubt about how long Osborne will be chancellor.  Yip, the so called Quiet Man as the assassin is a strange prospect.  Not as strange as the prospect of a man who went to Easterhouse, and came out of the experience wanting to make poverty stricken people worse off, holding the moral high ground, but we do live in strange times.

The prospect of Cameron not lasting this year is now a real prospect as the enmity towards the Cameroonies has now erupted into open warfare.  All of this should be an open goal to a Labour opposition still recalibrating itself after defeat.  Maybe all Corbyn needs to do is sit back and do nothing but plan his next move, I don’t particularly remember John Smith being outstanding around the time of ‘Black Wednesday’.  After all, Cameron’s government is showing every sign of not knowing when to stop digging, with the prospect of Osborne having to submit a second budget to cover the estimated £4bn black hole that the PIP’s u-turn has created.