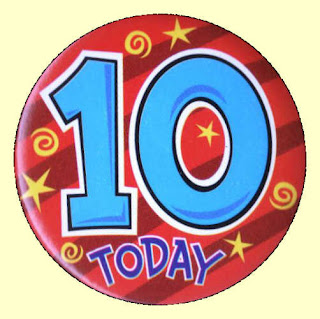 It's 10 years.. pretty much to the moment, since I started this blog. It's is strange to think that it's something I kind of fell into, something that I kinda had to be prompted into doing.  Yet I'd always liked writing and was a bit of a political geek.
Most of the time it has been enjoyable, there have been moments where I easily saw myself reaching this landmark. There have been other times where I really struggled, but that's generally been the during the time's where I struggled.  If you look at the archive, you'll probably guess when.  At the moment, I'm in an okay place which is probably why posts are fairly regular at the moment.

When I did my 5th anniversary post, I'd flagged up the nascent Scottish based blogs that acted as an inspiration, and probably not just to me as those bloggers are, to all intents and purposes, the digital fathers and grandfathers of Wings over Scotland, Briebart and the other Alt-News Websites.  Lord preserve us...
Thanks to them for inspiring me to do this and thanks to the more higher profile people who have read, liked and shared this blog on social media.
But thank you for reading and raise your glasses to the... well is it too much to ask for the next 10 years?  After all, tomorrow sees a Scottish land-owner become the 45th President of the United States and the best thing to do with that is to take every day as it comes.
Posted by Allan at 21:25

Email ThisBlogThis!Share to TwitterShare to FacebookShare to Pinterest
Labels: MacBlogosphere

Congratulations on the 10th birthday, Allan. Some great posts, some I disagree with, and to be honest your Westminster focus doesn't really chime with my own these days, in fact I've to a large degree given up on Holyrood politics as well!

But as someone who blogged in a fairly low-profile way for several years I know how 'lonely' and dispiriting it can be at times, particularly for someone who's not particularly partisan, and thus of less potential interest to the more zealous online political zeitgeist.

So although I haven't necessarily agreed with a lot of what you've said, particular congratulations on the fortitude to keep going for a decade!

Thank you very much Stuart. Not really sure about being lonely, but certainly can be dispiriting. Then again, maybe watching so called 'professional' political commentators say things you think 'that's rubbish' kinda acts as inspiration. And there's certainly a lot of inspiration at the moment in watching certain commentators talk about 'material change' when no such a thing has happened.

Have you never thought of picking up the laptop again? :-)