You know there was a discussion on blackandwhitearmy regarding what people were doing on Saturday the 12th of May, the date when the mighty St Mirren came from 2 down 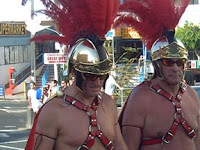 to beat Motherwell (at Fir Park mind) 3-2, only to hear that Dunfermline had lost at Inverness and that the mighty Buds were safe.

Me, I went to Playa de Ingles to a Gay Pride festival.
It was my girlfriend’s idea to go after hearing about it on the plane. I just thought why not. We weren’t sure what time the parade started so we headed there about midday, arriving at about 1 o’clock at the Yumbo centre, a kind of multi storey version of the Piazza circa 1988. After some wandering aro 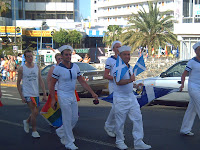 und we found out that we were about 3 hours early for the parade. But we also found out about the concert, which started about 8:30 in the evening.

We wandered to the courtyard area where the concert was due to take place and caught some of the sound checks, we caught the Jacob Sisters who threw the biggest hissy fit I have ever seen, and we caught Marc Almond and Bucks Fizz too. 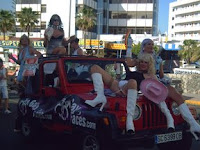 After that we then went for some food. We went to this Chinese restaurant in the Yumbo centre, where the food was incredibly greasy. The owners even tried to ration ice cubes! Once we had finished we reckoned it was time for the parade, so we wandered outside the centre to find a spot for the parade, which soon enough came round the corner!

There was a high proportion of Scots at the parade, 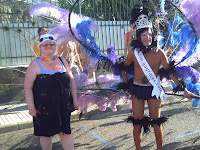 which was good. We have an image of ourselves as buttoned up repressed presbytarian types, which is far from the truth, given enough sunshine and hedonism. Sunshine really should be on the NHS (translate vitamin D12, the magic one that we can’t make ourselves!)... 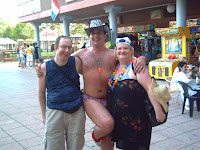 s in the parade, got some pictures, and then headed down to pick a spot for the concert, which I will write about next time. We thought about a first floor view until we realized that we would probably need to sit down at some point so we sat down o

utside Buddies Bar (yes, a Buddies Bar, in Gran Canaria of all places), got some drinks and relaxed waiting for the show. Except we got talking to a girl called Emma who was perhaps a bit too, um, open! Its not that she wasn’t good to talk too, but she was just a bit too frank about certain things, that’s all.

Anyway next time, I’ll be writing about the concert, see you then.
Posted by Allan at 23:56