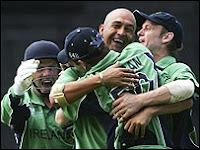 akistan on St Patrick's Day amid unbelievable tension in Jamaica.
Led by their brilliant wicket-keeper batsman Niall O'Brien, they reached a rain-adjusted target of 128 with three wickets remaining in near darkness. Ireland's fans, who had been there to witness the tie against Zimbabwe, could barely contain themselves afterwards.
The result means Pakistan, ranked fourth in the world, are already out.

The Cricket World Cup was not a good event. There were several reasons for this, it was too long and the format was too convoluted, the big teams were off form, and the stadiums were empty and devoid of local Caribbean atmosphere. This match however, became the biggest story of the World Cup, and not just because it was a big upset. No, a huge upset. Bigger than the defeat of India by Bangladesh on the same day in Trinidad.

I can’t really stress how much Ireland were expected to be the whipping boys of this group, but to bowl Pakistan out for a low total, and chase it down successfully makes this one of the performances of the year (even if this was not one of Pakistan’s greater incarnations).

However, this result was put into the shade by the death later on/the following day of the Pakistan coach, Bob Woolmer. This event was made worse by the suggestion th

at there was foul play involved, with hints and rumours of betting syndicates seeking revenge for a result gone wrong. Bob Woolmer’s death was a great loss to the game. He was a talented coach, setting up the South Africa side to challenge Australia at the best Test side. There was talk, albeit unfounded ones, that he would replace Duncan Fletcher in the summer (of 2007).

Whatever happened, the events in Kingston on the night of 17th March put a shadow over this event, from which it never really recovered. It’s a pity because there were some really good performances during this world cup, which sadly will be forgotten.
Posted by Allan at 00:11