Argentina rocked tournament hosts France with a sensational 17-12 victory in the opening match of the 2007 Rugby World Cup in Paris. The inspired Pumas outplayed an error 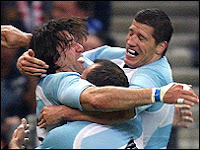 -ridden and nervous-looking France and took control with a first-half try from full-back Ignacio Corleto.

This may come as some sort of heresy to some of my compatriots, who have a chip on their shoulder regarding the oval ball game, but this years Rugby World Cup was as well as being the most successful staging of the event, was also the best, most exciting sporting tournament since Euro 2000. On most of the match days, there was something exciting, interesting and challenging to watch. There were lots of games that I could have picked as moments. Standout moments include Wales last gasp 34-38 loss to Fiji, England being swept aside by South Africa in their pool game, England demolishing the Australia pack in their quarter final win, France’s quarter final win against New Zealand and the progress of Argentina.

Argentina’s run to the semi final started here, which is one of the reasons why I picked this game. To a non-union audience, this was something of an upset. To those in the know, the upset was more the poor form of the French in this match. France had previously lost 4 out of 5 tests against Argentina so this was expected to be a tight game. This game also set the tone for this tournament with games not entirely going the way that you would expect. Ireland might still have qualified from this group had they not have to beat Argentina and score 4 tries for the bonus point, which they had to do after failing to get a bonus point against Georgia. In the end, Ireland were flat and struggled to find their form, so deserved to go out. Argentina also did for Scotland, who should see it as an opportunity spurned to reach our first semi-final since 1991.
Argentina’s tactics here also started a mini renascence of the old style kicking game, which England went back to in the wake of their pool defeat to South Africa. This change of tactics was a key element in England’s run to the final. They had some tricky, but not insurmountable opposition in the shape of Tonga & Samoa before they got to play their quarter final against Australia.

France also built up momentum, from this particular game, and upset New Zealand. Perenial favourites for World Cups, but to throw George Gregans quote from 2003 at them – “Four more years boys!”. By which time it will have been 24 years since their triumph in the inaugural tournament. By sharp contrast, South Africa looked good from the off, even before the tornament began with a heavy defeat of Scotland at Murrayfield. South Africa (left) were worthy champions, even though they did have a scare against Fiji in the quarter Final.
In the final, South Africa were worthy winners, and overall they were worthy World Champions, but had the Cueto try been given it would have been a much more interesting game. It would have been interesting to see South Africa come under pressure. As it was, the Final was a poor match. Come to think of it, has there been a good World Cup final?
Posted by Allan at 22:21