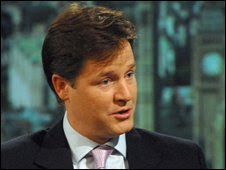 In the same way that the Charity Shield and the European pre-qualifiers are the unofficial start of the football season, the party conferences are the start of the political “season” which will take us to the spring elections. These are scheduled to be just local elections and the European elections. However we are now due a General Election within the next 18 months, one which the timing is still very much in the gift of the Prime Minister. These conferences are an ideal time to take stock with where each party is. In the Next few weeks, New Labour will be in Manchester, while the Conservatives will be in Birmingham. This week has seen the TUC conference, but the party conferences begin properly with the Liberal Democrats in Bournemouth.

12 months ago, the Lib-Dems were recovering from a poor showing at the English Council Elections, and more significantly, in the elections for the Scottish Parliament and Welsh Assembly. Since last year we have seen the resignation of their leader at Westminster, Menzies Campbell (for the reason that his age was damaging the party) and the resignation of their leader in Hollyrood, Nicol Stephen (to spend time with his family). For their replacements, Nick Clegg (top) and Tavish Scott, this will be a key moment for both of them. With the New Labour project unravelling by the day, this is the perfect opportunity for the Lib Dem’s to regain some ground after the advances made on their ground by David Cameron’s Conservative Party.

However, the question remains, and this might just be a key question. What are the Lib-Dems for? For a few years now the debate has been going on about whether the Lib Dems should be about liberal social policies (socialist lite, so to speak) or should they follow a liberal economic path, the route espoused by the grouping behind The Orange Book (a collection of essays about liberal economic policies put together by the MP David Laws). Clegg is known to be from the Orange Book wing of the party (it is not known however where Scott stands). If the 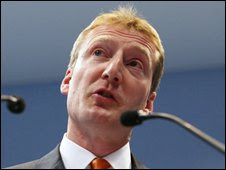 Orange Book wing win the argument, this could win votes in England, but would cost votes in the left wing orientated Scotland.

So to sum up, what are the Lib Dem’s aims for this week? For starters, they have to start to marry the two visions for the party & come up with policies which reflect this. Targeted tax cuts to ‘the less wealthy’ would be a welcome start, as would be the restoration (of the potentially vote winning) of the policy on a top rate 50% tax band. Clegg has already mentioned something about this, while Tavish Scott (right) has called for a 2% tax cut in the Scottish Budget, which will be next week. They have 2 years of haemorrhaging votes, in the aftermath of the removal of Charles Kennedy, to make up. As is outlined at the start, there is at most 18 months to do this. If they can’t, Cameron will be Number 10’s next resident.
Posted by Allan at 20:02