The Road To South Africa Begins…

There have been qualifiers in most parts of the world, notably in South America, but for the majority of European Countries, World Cup qualifying begins in earnest today, and for the home countries it’s a very mixed start. Wales should have no problems at home to Azerbaijan, while Northern Ireland attempt to carry on the momentum from their almost successful Euro 2008 campaign, with a tricky away trip to Slovakia. For England & Scotland, it is two very mixed starts.

Our qualifying group (of The Netherlands, Norway, Iceland & FYR Macedonia) theoretically should be escapable, compared to having 3 of the World Cup quarter finalists in our qualifying group last time (see below) , however when exactly have Scotland ever stuck to the script. For example, today’s game in Macedonia should be the easiest away fixture on the list. However Macedonia’s ranking is lower than their results suggest, draws in England (twice, during qualifying for the last 2 European Championships, picture below), their star player (Pandev) plies his trade with Lazio while others in the team are with respectable clubs in Belgium, Germany and France. Scotland being Scotland this could be the toughest fixture of the whole campaign, including the fixture in Amsterdam in March next year.

As opposed to the rest of the group, when we have had recent fixtures against the other teams, in qualifying for Euro 2004 and the last World Cup, this will be the first time that Scotland have played Macedonia, and only the second of the former Yugoslavian teams that Scotland have faced (we faced Croatia in qualifying for the 2002 World Cup). If Scotland escape with a draw, it could set us up nicely for the away trip on Wednesday to Iceland. 4 points out of 6 is a must from our opening fixtures.

In sharp contrast, England start away to Andorra, which WILL be their easiest away fixture in their qualifying group 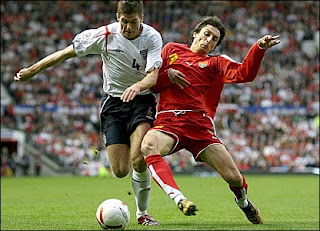 , and is also the only away fixture in Western Europe. Their qualifying group is something of a tour of the former eastern bloc, and also a list of banana skins (Croatia, Ukraine, Belarus & Kazakhstan being the other teams in England’s group). With only the top team qualifying as of right (with the second placed team facing a play-off), this looks to be a tough group for England. Ukraine will be smarting from finishing 4th in Euro 2008 qualifying (behind Italy, France & Scotland) and will want to put on a better show, while England’s next game (which is away to…) their rivals from the Euro 2008 qualifiers. Croatia will want to achieve their 4th World Cup finals appearance in a row, and will be confident of doing so after their performance in qualifying for the finals of Euro 2008, and some of their performances in the finals themselves.

In assessing England’s chances of qualifying from their group, you cannot underestimate how difficult this group is. Yet the English media are already doing exactly that, by focusing on how England are playing, the style of play, the absence of Michael Owen from the current squad… anything really than the match in hand. As with Scotland, 4 points from the away games in Barcelona and Zagreb are a must for England.
Posted by Allan at 09:27