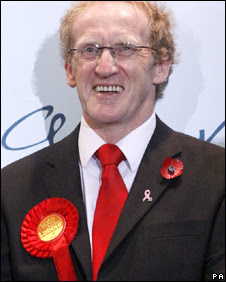 Quite a few of my recent posts have been about Renfrewshire council struggling to come to terms with the mess left behind by the previous regime, and having to enforce unpopular cuts and fee rises in order to meet its commitments. Sound familiar?

It is this exact facsimile of circumstances which has been the determining factor in New Labour’s by-election win last night. This was the central issue of this election, with the SNP candidate apparently being challenged in shops about his council’s budget cuts. While campaigning on Wednesday, Salmond was also hijacked by save South Primary School protesters from Paisley.

The fact that New Labour won is not a surprise, this election was always going to be nip and tuck. The majority of 6737 is something of a shock, it is believed that Brown thought that his party would lose the by-election up till 10:30 last night, when the votes started arriving at the count. This is the first concrete proof of a Brown bounce post the mass nationalisation of our banking system. Whether this holds up, meaning a General Election at some point in 2009, is anyone’s guess. I reckon we won’t get an election before October next year (I still think Cameron will win it, with a majority in single figures).

For the vanquished there are problems ahead. The Lib Dems and the Conservatives lost their deposits. For the conservitives to be able to claim that they have a mandate to govern Scotland, they must poll better than the 1639 in Glasgow East and 1381 in Glenrothes if they are to claim some sort of mandate. The Lib Dems are just going nowhere. Tavish Scott really has to pull his finger out, as the Lib Dems have shown their lack of patience in recent years with their leaders'. How much longer has he got?

For the SNP, the Blairesque honeymoon is well and truly over. To complain about this and that, to say well we got a 5% swing on our Westminster vote (in 2005) when they won pretty much the same seat in the Holyrood elections 18 months ago is a bit petulant (the swing between 2007 and 2008 being 15.2% to New Labour, if my calculations are wrong, I apologise). I saw Angus Robertson MP even try and convince us last night that the result was a good one. Politicians must realise that trying to convince us that Blue is Green is incredibly tiresome and risable to the electorate, if so why do they do it?

Like it or not the SNP government have suffered a setback, the best thing for them to do would be to stop the rotund winging and get on with the job. As a famous golfer would put it (Bobby Jones I think, not Donald Trump) “You have to play the ball where it lies”
Posted by Allan at 20:01