The Four Horsemen of the Apocalypse appeared before a parliamentary committee today to apologise for laying wasted to many countries economies and destroying many thousands of jobs.

One of the horsemen, named only "The Shred" said sorry, and that he was only following his orders which was to make as much money as possible, no matter the consequences. 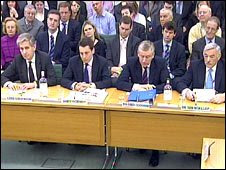 In the only opportunity to find out the why and wherewith all of how our two financial institutions nearly collapsed, the former Chairmen and Chief Executive's of Halifax/Bank of Scotland (Dennis Stevenson and Andy Hornby) and The Royal Bank of Scotland (Tom McKillop and Fred Goodwin) appeared in front of the House of Commons Treasury select committee. Essentially, these are some of the people to blame for the current recession.

From what I gather, the edited highlights are thus, they are all really sorry, but did not foresee the credit crunch, until the collapse of Lehman Brothers in September (a year after Northern Rock first fell into trouble in this country). The ABN Amro deal was described as a "bad decision" by Fred Goodwin, which was a bit of a no Sh** Einstein moment. When Barclay's felt that they had lost ABN Amro, they probably thought that if they were not going to get it then RBS would have to really pay to get their hands on ABN. Though I do know people who think that Barclays weren't really interested in ABN Amro, but more interested in the possibility of hurting one of their competitors. If that is the case boy had they succeeded.
I do suspect however that the four bankers did get off lightly, the questions put by the committee were not difficult ones, and the bankers easily evaded giving too much away of what happened. They did point out that they have been punished, as they have lost out when the value's of their shares declined, Goodwin mentioned that he alone has lost £5 million. Sorry, but I'm sure that they can afford it (Andy Hornby is still being paid £60000 a month), there are pension funds, and small scale savers who have comparatively lost out on a larger scale than they ever could. These people should try and say that to the 2300 people who Goodwin and McKillop's former employers are going to make redundant.
The four bankers were allowed to make their false apologies, and then not answer the really controversial questions. I'd like to see how they fare against someone of the callibre of Paxman, who would get the much sought after answers, rather than the preening parlamentarian's.
Posted by Allan at 20:59