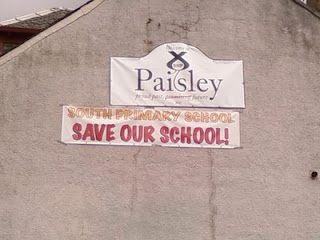 On Friday, the South Primary School will shut its doors for the last time. By the looks of it though, this will not be the end of the most controversial episode in the current SNP/Lib Dem administrations short time in office at Cotton Street, and shaping up to be the most controversial school closure since the aborted attempt to close Paisley Grammar 20 years ago.

Last week, the Paisley Express reported (not in a breaking news style, this story is 14 days old, but hey at least they reported it) on the guerrilla tactics employed by disgruntled parents, tactics which are the reason behind some of the comments on this blog (there is also a blog, the link to which can be found on the blogroll). These include placards under official SNP placards which read “SNP – Shuts Newer Primaries” which were only on view on Euro-election day, and a large poster at the South which reads “Paisley – Proud Past Promising No Future”.

All of which is perfectly legal, we live in a free country and are perfectly free to demonstrate against injustices, except those against the USA but that’s another blog. Except our council leader Derek “boy” Mackay clearly disagrees with the democratic process. In an astonishingly petulant interview, the boy Mackay warned that any further displays of disorder would result in him throwing his rattle out of the pram. I’m paraphrasing of course, what he actually said was…

Lochfield is far more viable than South Primary, even if it is an older building. Lochfield Primary has 414 pupils and is 75% occupied, compared to South, which was two thirds empty and had just over 100 pupils”

Gee, Paolo Nutini got a warmer response for being more scathing (and spot on) about Paisley, even if the boy MacKay was deeply patronising about his parents, respected members of Paisley’s business community for as long as I can remember. However there are 2 questions which spring to mind, which were sadly remiss from Cameron Hay’s PDE article, questions which should really have been put to the boy MacKay. These are

1) Have you fully looked at every alternative to closing a 22 year old facility, compared to amalgamating school rolls into a 50+ year old building, a decision which is clearly ill thought out and very poorly explained?

2) Do you have any plans for the South Primary site? Do you have plans to sell the site to the owners of the Ex Vita-foam factory – Aldi, or do you have other buyers lined up?


Remember kid’s, answers on a postcard to the usual address.
Posted by Allan at 10:29

One point you see to be missing is that HALF of the parents in the South School catchment area DON'T WANT to send their childen to it. That is why it is 70% empty. How are you going to make them ????

If you want to close Lochfield and send the children to the South School please explain how you get 500 childen into a school designed for 300 ??? Do the parents at Lochfield not have any rights ???

Anonymous (15/7) - What I don't get is why did you not want to send your children to South Primary? Is it too far away? Is it not good enough for you? And why do you assume that I want either school to shut, though logic dictates that Lochfield will close for a temporary period while it is revovated?

The closing of the South just doesn't add up despite the boy McKay's protestations.

you still haven't answered - would you compel all parents who currently live in the South catchement area but send their children to another school to suddenly send all their children to the south regardless of their wishes?

I am interested as to why "half of the parents in the south school catchment area DON'T WANT to send their children to it",

The South had good reports, and was apparently one of the best primary schools in Renfrewshire. Where is your evidence for saying 50% of parents didn't want to send their small people to South PS? What reasons are given for doing this?