Why The SNP Lost Glasgow North-East

So New Labour claimed their first by-election win in a year with their huge win in Glasgow North-East. While all of the vanquished have been playing the time honoured game of clutching at straws, for 2 of the defeated this is a serious slap in the face. 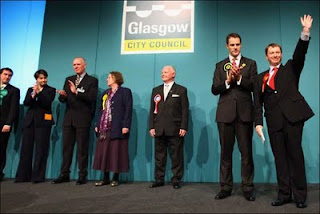 For the SNP, this is a crushing defeat. They had high hopes of winning this seat, and were certainties to push New Labour close. Instead they conceded a majority of 8111 to New Labour. There are 3 main reasons for this defeat. Firstly the SNP dithered and dallied about who to go for to run. There were rumours that Grant “Tartan Hero” was going to be the candidate. In the end the SNP chose David Kerr, a former BBC reporter, as their candidate.

Kerr did not adapt immediately to the task. Quotes attributed to Kerr emerged where he claimed that Universities such as the University of West of Scotland and, more pertinent to the election campaign, the Glasgow Caledonian “Did not have much of a reputation to tarnish”. There was also criticism of Kerr’s brand of Damien Day style reporting, brandishing guns in a supermarket car-park in one report shown on the news. Outraged New Labour spin doctors also tried to paint Kerr as the albino monk from “The Da-Vinci Code”, as it emerged that Kerr was a member of the Opus Dei sect. All of which damaged Kerr, especially as there seemed to be no response from the SNP to these accusations. The SNP’s own accusations about the New labour candidate, Willie Bain, that he was such a local boy that he still resided in London seemed to be ignored by the local electorate.

The biggest bearing on the campaign thought was the SNP government’s decision to scrap the Glasgow Airport Rail Link. The leader of Glasgow City council, Stephen Purcell, launched an astonishing attack on the government, accusing them of being “Anti-Glasgow” – conveniently ignoring the fact this plan was not universally embraced in Paisley, where the GARL link would be built. The “Anti-Glasgow” jibe became the cornerstone of the New Labour campaign – and the SNP seemed incapable of playing the spin. The “Ripped-Off-Glasgow” leaflets struck a chord, despite the viable explanations, and the construction work getting fully into its stride for the M80 motorway.

The SNP should have countered by pointing out the tough choices made, because of circumstances created by Gordon Brown’s position either as Chancellor or as Prime Minister. They should have led by saying this was a recession created by greed and encouraged by Brown. They should have pointed to the greedy bankers being let off the hook by New Labour decisions. They also should have made a pledge to look at more cost effective options, like a railway line taking in Govan, Braehead Shopping Centre, Renfrew and terminating at the Airport, or a Mono-Rail from Paisley Gilmour Street Train Station to the Airport. More than anything else it was a failure to spin the scraping of the GARL properly which led to this crushing defeat.

Not that the SNP were alone in being humiliated. The Conservatives are on course to win the next election, with an average poll lead of 14% over New Labour. Yet in this By-Election they polled only 1075 votes. One of the Tories, in trying to sideline the SNP, claimed that the people of Scotland had to make a choice between Brown or Cameron. The people of North West Glasgow gave their response in no uncertain terms to that.
Posted by Allan at 12:00

Good assessment Allan. The SNP campaign just didn't have any lustre. Never once did I feel like jumping in the car and going to Glasgow to help out. I did that for John Mason's campaign though.

Surely the SNP have now learned that in Glasgow area a local candidate is a necessity. Their first mistake was not vetting the original candidate then, when he withdrew the silliness started.

David Kerr, for me, was a poor choice. His lack of knowledge of the Afghan war on Newnicht was dreadful, although in fairness, none of the other candidates was asked the same question.

It was the same at Glenrothes. They let the 'pensioners are having to pay the council for services which used to be free' labour leaflets run for far too long before they attempted to counter the accusations. Was far too late by then.

The SNP really need to up their game and stop being 'nice'. That doesn't work in the west.

So let's get this straight.

Labour won by making personal attacks and refusing to explain how they would fund GARL whilst considering cutting rail links between London and Glasgow.

And shock horror, the Scottish media went along with the story.

Only now are we hearing that the commonwealth games has went up by £80 million and will be bailed by the Scottish Government.


What's astonishing and what I think the rest of Scotland is wondering is why do this 15% in Glasgow North East support a party that lies to them, has failed them and continues to take them for granted.

Any analysis on that question?

Many Thanks for the comments.

Subrosa - Absolutely, i did a post earlier this week about Hugh Henry which in essence is the calaber of spin which the SNP face here in the west, where everything is blamed on the SNP government, and ecconomic circumstances don't play a part.

With your last point, I think you semi answer it by refering to them as Labour. Many people in Scotland still see them as the Labour party, the party that defends the working man. For that reason, there is still a residual good will towards them (that and the "my dad voted Labour and my grandad voted labour so I vote Labour" constituancy)

That party died in 1994, replaced by New Labour. But still up here, they campaign as Scottish Labour.

Good stuff, Allan, although the James Dornan saga might have been worth a mention, since you covered Grant Thoms.

I should have included you in last week's Scottish Roundup, but I thought I'd checked your blog to see if you'd covered the by-election, but it must have been Friday and I forgot to recheck on Saturday!!

Thanks for the comment, I had actually forgotten about the James Dornan saga, lack of research on my part (ah if only there were 28 hours in a day!)