5 Questions the Americans Should Answer (Part 1) 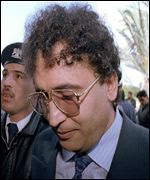 With the first anniversary of the release of the convicted Lockerbie bomber Abdelbasset Ali Mohamed Megrahi (Pictured left, at his trial in 2000) approaching, the release has suddenly appeared on the radar of American senators and politicians, who have been struggling to jump onto the bandwagon launched by Hilary Clinton. Clinton condemned the release while Obama and Cameron launched an astonishing and ill-informed attack on the Scottish Government (that’s Government Cameron, call yourself Prime Minister). Obama, Cameron & Clinton seemed to be ignorant (or chose to ignore) that there are serious doubts about the conviction. The American authorities themselves are not blameless in this sad episode where the truth has been a victim in the race for favours and commerce.(NB: Part two will be posted on Monday)

1) Why did Bush and Thatcher agree to “play down” the truth?
In January 1990, an article appeared in the Washington Post which stated “President Bush and British Prime Minister Margaret Thatcher secretly agreed last spring to play down the truth about who blew up Pan Am flight 103 over Lockerbie, Scotland. After both leaders had intelligence reports pointing the finger at a terrorist hired by Ayatollah Khomeini, Thatcher called Bush. In that conversation they agreed that neither could stand the political heat of making the evidence public because both were impotent to retaliate.

When the intelligence reports began to leak last March (1989), Thatcher called Bush to discuss their problem. Bush didn’t argue when Thatcher suggested that they “low-key” the findings. After the call, word was quickly passed to top officials conducting the Pam Am investigation that they were not to make any off the record remarks implicating Jibril or Iran in Britain”
At the time of the call, the investigation was heading towards the Syrian/Iranian backed plot theory, with the culprits thought to be the PFLP-GC (the Popular Front for the Liberation of Palestine – General Command). The Transport Secretary at the time Paul Channon is supposed to have made comments to this effect at a lunch with four journalists, comments which despite being off the record still found their way into the press. The call could be seen as an attempt to dampen speculation or as an attempt to throw the press investigation off a more worthwhile question – Why did the security services fail to stop a terrorist attack despite several warnings?

2) What was on Pan Am Flight 103 – Clipper Of the Seas?
We know that Major Charles McKee, a senior CIA agent who had been involved in the release of hostages in Beirut and the former deputy CIA station chief in Beirut Matthew Gannon were among the dead of Pan Am Flight 103, but what were they carrying and what else was on board? After all security services were swarming all over southern Scotland within hours of the explosion. Jim Wilson, a farmer from Tundergarth Mains reported finding a suitcase, neatly packed with a powdery substance that looked like drugs. The police took the suitcase away, but was not asked about the suitcase at the Fatal Accident Inquiry in October 1990. The “owner” of the suitcase did not appear on the list of passengers for Flight 103 either. There were also stories of “a huge red or orange tarpaulin in an open field. It covered a large box or container” – this was guarded by a helicopter and an armed guard. It was suggested by the radio reporter David Johnston that the investigation was held up for two days while the CIA inspected the luggage of their dead officers.
These stories would have been just stories if it wasn’t for the sinister veneer of the experiences of Doctor David Fieldhouse. Doctor Fieldhouse drove from Bradford on the night of the disaster to offer his help to his colleagues from Dumfries & Galloway (Dr Fieldhouse was a police surgeon). From his arrival late on the 21st through to darkness on the 22nd he aided in the act of searching out and labelling bodies, by the time he was finished he had labelled 59 bodies. When he came back on the 23rd, to keep an appointment he was told that his tags had been replaced by “official” 58 tags. The official police figures showed that he had certified 58 bodies. Dr Fieldhouse was then subjected to the most ridiculous smears. The Lord Advocate at the Official Accident Inquiry asked one of the Police Sergeant’s “Would this be another example of Dr or Mr Fieldhouse carrying on a search on his own?” – Dr Fieldhouse was assigned a police officer on his arrival in Lockerbie late on the 21st. Sergeant David Johnson was asked by Mr Gill QC when Dr Fieldhouse submitted the information about the bodies he found, Sergeant Johnson replied “It would be some months later before we were able to ascertain the complete information we had to hand”. With these strange events in the initial aftermath of the bombing, it looks like something was being covered up.
Posted by Allan at 18:30

Welcome friend to the deep and disgusting world of Lockerbie. If you have got this far on your own, you're doing well. Some of us have been here or 20 years, and a new voice is often helpful!

You will by now know that thwew are as many Lockerbie theories as bloggers plus one. The official theory. The official theory is in tatters and some of us believe that sensible US ledaers (are there any, we so rarely hear from them) are privately delighted at Megrahi's removal from the scence back to Libya and hope he dies, before he reveals what few secrets he has left.

They know quite well that the man was framed, and the evidence is all faked, with the exception he was at Luqa airport on the morning of 21 December 1988, and I AM NOT SURE THAT THE CIA did not have a part in his presence there.

The next theory up is that either the PPSF or PFLP GC did it. The CIA never fully revealed its plans to accuse these bodies, and both have denied it. ABU Nidal in a press conference and abu Talb in the Zeist Court.

Proponents of the guilt of either of these two organisations do not ome up with any fully fledged mechanism.

Then there is my theory, hich says it is Iran and the US who blew up th plane using their agencies the CIa and Pasdaran. This is a fully worked out theory, which raises many new questions, and has unbelievability as its primary problem. Even senior bloggers cannot quite grasp that the US ahd to deal with its avowed enemeies over IR-655, and it was better to allow a joint operation to blow up an American airliner than allow the Iranians to do it alone.

When you have got as far as this you will find each theory has different clues and you cannot use the clues from one theory to prove or disprove another.

Then there are the loony theories, from weather to UFs. Please do not go down that route.

I think you are relatively new to Lockerbie and you are doing well. If you want the basis of my theory you can contact me a norriecb [at] gmail [dot] com.

Charles Norrie, so his own reasons working on Lockerbie for over 20 years.