My own theory regarding elections is that they don’t really start until you either see the paraphernalia go up, you see the candidates or receive campaign literature through the door.  On this evidence, the Independence referendum will be the longest political campaign this side of the Atlantic, as I bumped into campaigners for the no camp, or to give them their Sunday name supporters of the Better Together camp, on the way home from work last Friday. 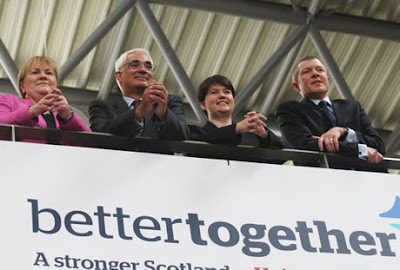 Regular readers of this blog will know that I do love a good leaflet, so after discussing where I sit in this debate (and trying to plug this blog) I took away a leaflet which attempts to put the case for voting no.  The arguments put in the leaflet can be split into three.  There are the statements of the bleedin’ obvious that are not really relevant to the sense of grievance at the heart of the Scottish psyche, there are the statements that pose a question to “Yes Scotland’s” economic arguments and there are statements that are mischievous.

On the front of the leaflet (possibly tellingly) is a statement that “The UK means that Scots get a seat at the top table at the UN alongside China and America”  - prefaced with “Just one reason why we’re better together”.  I don’t know about you but of all the reasons to vote no, retaining the influence of the UK is, I suspect, quite some way down the pecking order of priorities.

That’s not to belittle people who think that it’s great that while the country burns, everything is OK because we (through the UK) have a permanent seat at the UN Security Council because obviously the UK has used their influence well in the past.  Hmmm...  It’s just that there are other priorities.  The same accusation can be made of the argument that “Scots are represented by over 270 embassies as part of the UK”.  There is a thought that maybe these arguments are the equivalent of the filler track. After all the economic arguments aren’t phrased as economic arguments, more like questions for “Yes Scotland”.

Apparently “31,000 workers in Scotland have jobs with the UK Government”.  Reading between the lines, the question posed to the yes camp is how many of these jobs will go under independence.  Ditto, the quote regarding 1,000,000 Scots having pensions guaranteed by the UK welfare system is a challenge to “Yes Scotland” to respond.  Two of the arguments smack of veiled threats.  “One in five workers in Scotland are employed by English, Welsh and Northern Irish firms” hints that these jobs would be under threat should Scotland vote yes – a sort of economic blackmail.  Even darker is the claim that “Scots save billions on the cost of mortgages due to the UK’s AAA credit rating” – the justification for Osborne’s scorched earth policy of into the bone cuts.

Those four arguments pose questions of the “yes” camp, questions that “Yes Scotland” have not looked like answering at the moment.  As I have constantly pointed out, the economy will be the battleground for this campaign.  Better Together’s subtle jabs point to a campaign that knows that it is ahead and only needs to limit the other campaign to retain a lead.  The other arguments are mere mischief making, arguments that are discredited after several moments thought, but ones that really should be challenged.

For example “Scottish banks were bailed out with £470 billion from UK tax payers”.  Firstly, aren’t we still UK tax payers therefore we contributed too, and secondly does that include “English” banks like Lloyds TSB (forced into a merger with HBOS by Gordon Brown) and Bradford & Bingley.  Of course, rather like the credit rating argument fat load of good it has done us with the banks refusing to pass on our money to put much needed liquidity into the economy.  If Ms Lamont is seriously a fan of the coalition’s economic policies (rather like comrade Balls), she just had to say rather than give us subliminal messages through her line of blue suits.

The other mischievous argument is that “800,000 Scots live and work in England & Wales without the need for papers & passports”.  So they do!  Of course it’s not set in stone that they would need papers & passports if Scotland votes yes.  Ironically, it would be more likely that they would need papers if Scotland votes no considering some Blaitite’s love of ID cards.

Overall, it’s a strange leaflet.  In a close election, you would seriously question some of the points being raised.  However because “Yes Scotland” have simply not generated the required momentum the strange points will go unchecked.  The leaflet points out that “being part of the United Kingdom is the best possible part of our future” – yet talks about embassies and the UN, hardly the main topic of discussion down at the pub, while making veiled threats about a loss of jobs and immediate economic hardship from the outset.  Defensive is probably the best description I can use, and probably sums up both Better Together’s campaign so far and the stance taken by Lamont, et all when the questions about their support for Osborne’s scorched earth policy begin in earnest.
Posted by Allan at 11:00

Fair points, but I suppose the problem with the arguments on both sides is that it's often difficult to work out precisely what would happen, so essentially both sides are relying on bullshit, and to a large extent how people vote will come down to something more like gut instinct rather than specific details.

Of course, to an extent any vote is like that, but even more so in an independence referendum.