Watching the edited highlights a couple of weeks ago and catching some of the pro-Independence blogs, there is an air of the first day at school to it all.  The SNP activists all exude the air of being eager to campaign for their cause, and also display some signs of being a bit too green around the gills.  More ominously, like some pupils on the first day of school there is already a sense of destiny, of things will not go to any plan.  Watching the pro-Independence party’s blog and pontificate about Scotland’s future, there is a sense that the die has already been cast and that whatever happens, in two years time Scotland will vote to stay in the Union. 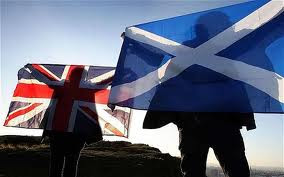 The biggest miscalculation that the SNP have made is in not taking note of the polls.  You would think that a party calling a referendum in an area where they are consistently polling behind (save the odd outrider) the various options within staying within the Union, would have put in some effort in outlining its arguments to the general population.   You would have though that there would have been pre-prepared lines of defence and some though put into how to gain a yes vote.  Except that apart from the line that Scotland would be better off being governed by itself and not by Westminster, there doesn’t seem to be an awful lot of thought put towards how exactly to overturn a polling deficit and win a referendum.  The fact that Independence for Scotland is just not a mass movement, unlike in Catalonia, has just not occurred to the SNP.

In 2009 I posted on how the SNP could blow apart the following year’s Westminster Election.  They were not going to get the Referendum Bill through the split 2007/11 parliament, so they should have stood (I argued) by putting their arguments to people during the General Election.  Of course, instead they ran on the awful “More Nat’s, Less Cut’s” – a campaign that saw them, if nothing else, retain their six Westminster seats.  What would have been interesting though would have been to contemplate what would have happened had the SNP gone down the other route.

That has not happened and as a result, much of the SNP campaign feels thought of on the hoof, or with the idea that day one of Independence will not be different to any other day.  Much thought should have gone into the launch of “Yes Scotland” – the campaign group formed to press for a “yes” vote in two years time.  The main aim should have been to get people talking, to put out a sort of “opening argument” in support of Scotland becoming independent and generally generate some recognition for “Yes Scotland”.  Instead, ex-pat Scot’s lined up to say that Scotland would be better off governed by itself, without actually explaining how or why while Salmond explained about some sort of petition.  Not the momentum generating lift that “Yes Scotland” needed.
The “Day one of Independence” argument however has seen several of the SNP’s arguments come apart under very little pressure from opponents.  The policy of a currency union with R-UK, which I suspect comes partially from this idea and partially from the acceptance that entry to the Euro would be unthinkable on so many levels at the moment.  This theory also drives the SNP’s argument about I-Scotland starting within the EU as a successor state.  There was two problems with this though.

Firstly, legal opinion on this position seems to be split.  Some lawyers seem to believe that Scotland would be a member state of the EU on day one of independence and that the EU would have no problems with this.  Other lawyers seem to think that this would be very far from the truth.  That I-Scotland would have to apply to join the EU and would be outside the EU on day one of Independence.  This split in opinion should have set alarm bells ringing among pro-Independence supporters.  Yet the opposite has happened.  Pro-Independence supporters have stuck their heads in the sand claiming that I-Scotland would, in spite of the paucity of evidence, take its place in the EU.  The second flaw is that no-one seems to have asked the Scottish people whether they should be part of the EU on day one of I-Scotland.

Of course, there is now a third flaw.  The SNP government it seems have spent in the region of £100,000 trying to keep out of the public domain legal advice that does not actually exist.

Where’s the Taxpayers Alliance when you need them?

The policy that started the Scottish Government’s “week in hell” was the reversal of the policy that I-Scotland would not join NATO.  Not really having an opinion either way, I don’t understand why such a divisive proposal was put forward and why it was proposed now.  It seems strange given that this was done on the back of a poll – one poll – that showed support for Independence would increase if I-Scotland was part of NATO.  Like I said, there are some aspects of the SNP’s campaigning that seems to be made on the hoof.

So what should Yes Scotland & the SNP be doing?  For starters they really should be getting on to the main battleground of this debate – The Economy.  While there is an acceptance in the Mac-blogosphere that Scotland can make it as an Independent country, Yes Scotland really need to take this argument out into the real world.  There is polling evidence to suggest that people believe that they would be worse off if Scotland became Independent and that this is the main reason that they will not vote for independence.  As I have said before, the SNP need to tackle this issue.  It does seem though that the SNP are already behind the curve here – Better Together have recently changed their argument from “Scotland can’t survive separated from the rest of the UK” to “We think that it is in Scotland’s best interest to stay a part of the UK”.

I think that unless there are changes in the tactics of Yes Scotland and the SNP, this referendum campaign will be done and dusted very quickly.  A lot of the damage has been self inflicted damage, which must be pleasing for the “Better Together” camp as they haven’t really put forward any arguments.  If all the current indications are correct, and Yes Scotland/the SNP carry on with their tactics (or there is an unknown element), Scotland will vote No in 2014.
Posted by Allan at 11:00

I appreciate that it's a long way out to know but it seems to me that should we vote for independence, the question of EU membership may be a political matter rather than a legal one (although it may well have a legal overcoat on it). On the one side there is probable Spanish and whoever opposition to separatist polities easing their way in; on the other, there is likely to be a large potential vote to disoblige the UK Government (assuming that the present one lasts until then). Indeed the relevant questions may be:
What the UK's relationship to the EU will look like in 2 years' time?
Will there be a loosening of the ties?
Will The UK vote itself out? Whither Scotland then?