Democracy At It's Finest 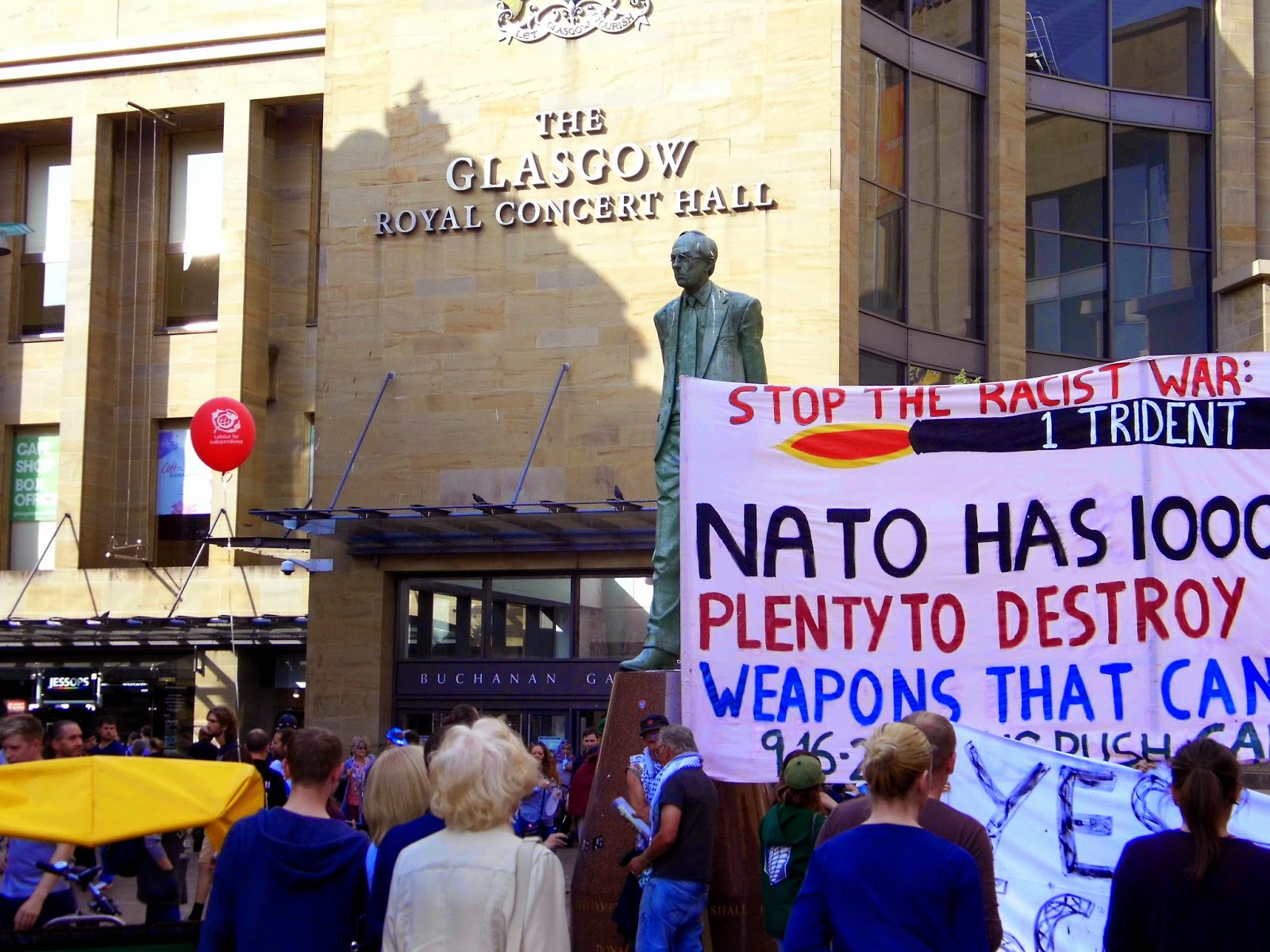 The last Saturday of the referendum campaign saw contrasting events for Scotland’s two main cities.  Edinburgh hosted the Orange Order, which whatever you think of them surely must be the subject of some sort of documentary.  Preferably one about how Neanderthal man can still exist.  Glasgow hosted…  well some sort of mass canvass event.  And it was a beautiful example of democracy in action that showed Glasgow and indeed Scotland in the best possible light.  It all just didn’t feel very Scottish.  Must have been the weather… 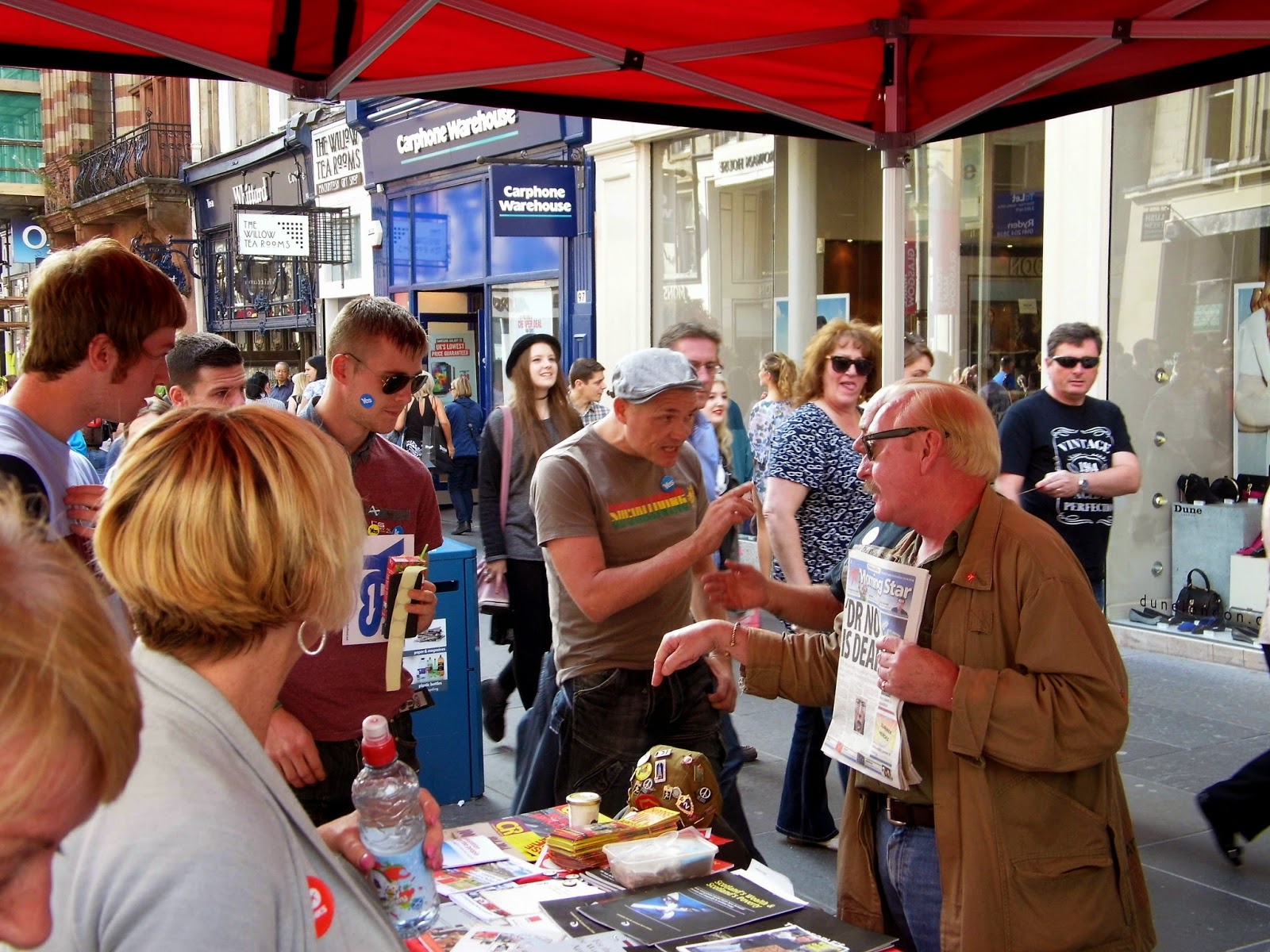 Most of the campaigners up Buchanan Street were Yes supporters busily trying to convince voters that another version of Scotland was available, if we voted Yes.  Like the Yes supporters I met in Paisley earlier, they were all very friendly approachable and happy to answer questions.  I also noticed quite a few of the well kent faces from the SNP about, most notably Humza Yousaf being interviewed by a foreign television crew (Russian or Irish possibly? - fourth picture).  What was most impressive though was the conduct of some of the No supporters. 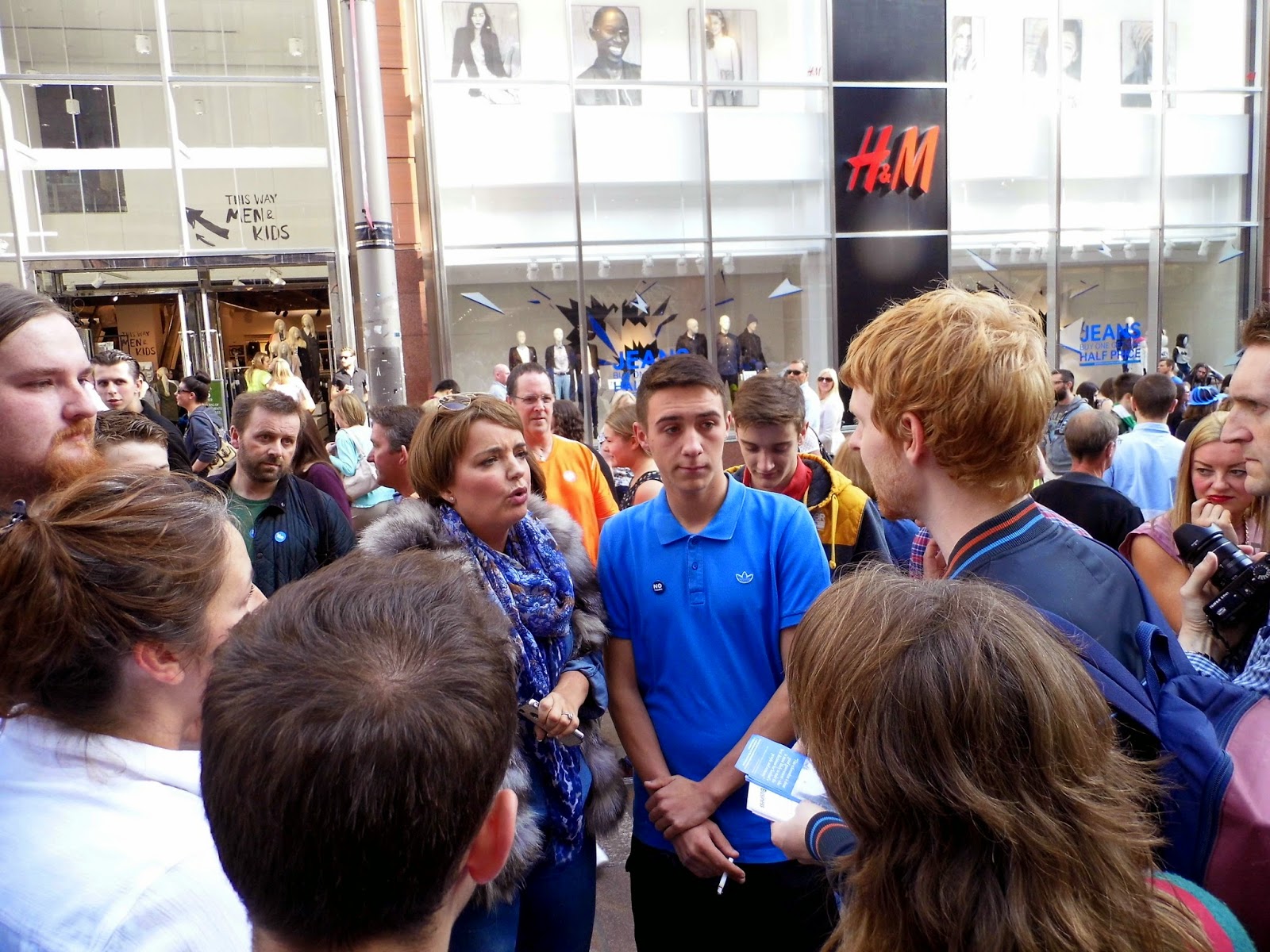 At this point I should differentiate between the “No” campaigners and the “No” supporters.  There were no supporters dotted up and down Buchanan Street engaging with yes supporters all having debates.  I think there were at least two or three crowds surrounding debates.  All very amicable but the passion on both sides was there. 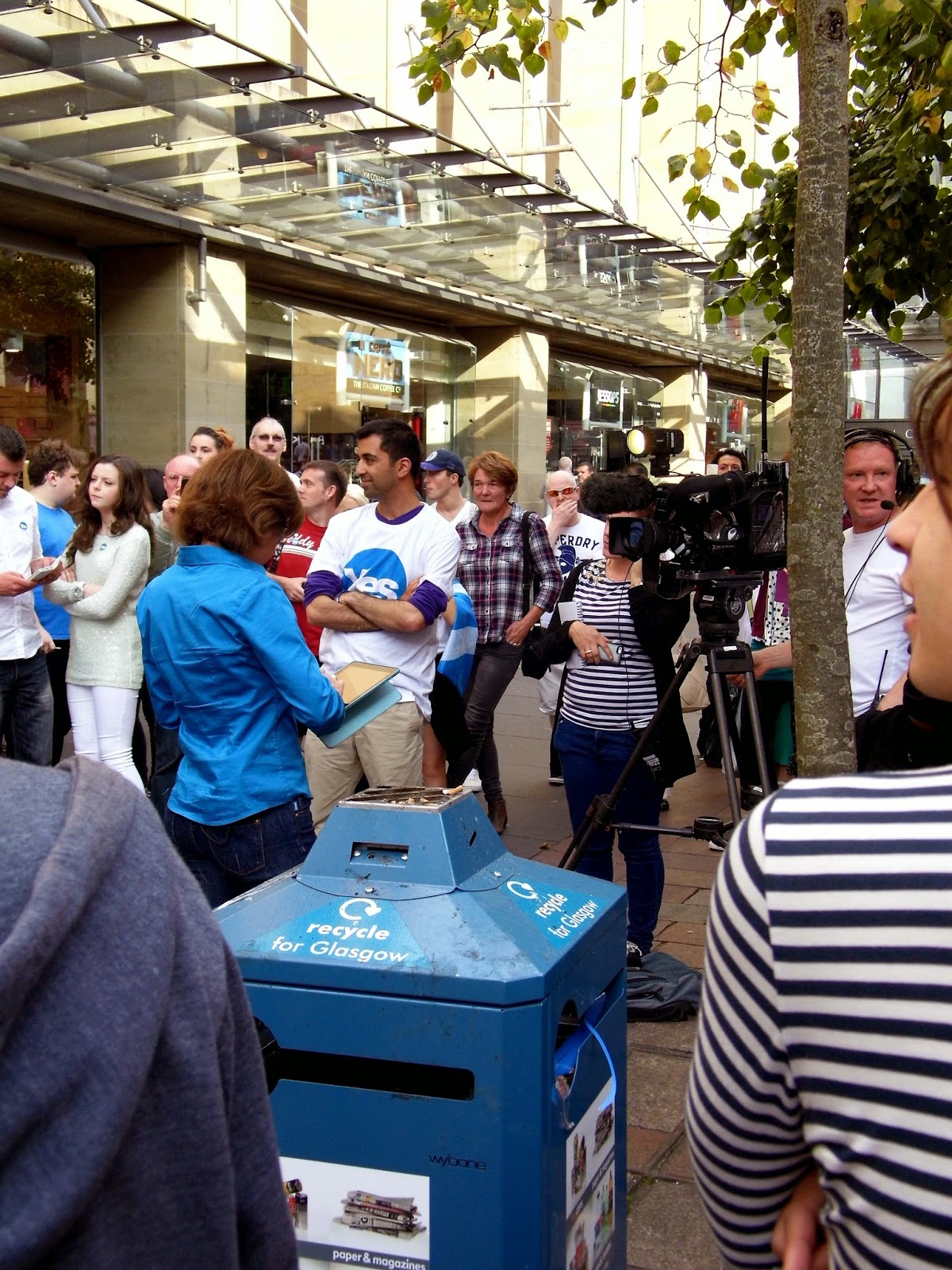 There was one kind of ugly moment, when a no supporter went up the stairs at the Royal Concert hall with his union jack flag.  I’m not entirely sure why precisely he was being booed – there was a suggestion that he might have been a BNP activist – but honestly I don’t know whether that’s true or not.

While most of the Yes supporters congregated up Buchanan Street – occupying the space under the statue of Donald Dewar that was occupied three days earlier by Milliband and Co’s attempt at symbolism.  The Pro-Union campaigners were camped a wee bit up Sauchiehall Street, just outside – of all places – The Savoy Centre.  There the atmosphere was very, very different.  Sober.  Professional.  They were here to do a job, not to enjoy themselves. 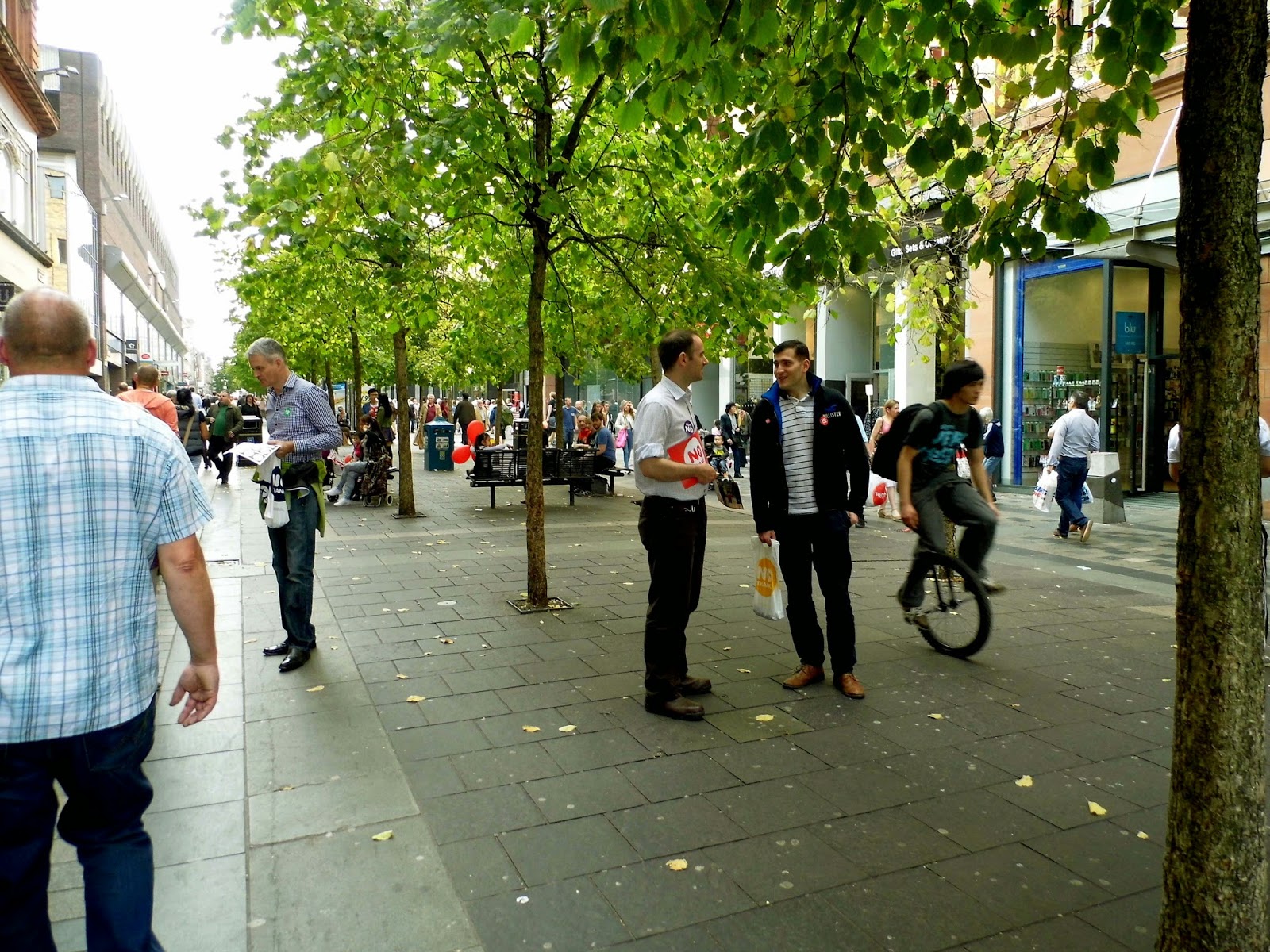 Speaking to the Better Together campaigners (left), they were sniffy towards “the noisy rabble” down the road and think that, according to their returns that they’ll win by enough “to wipe the smug grin off Salmond’s face”. That was said with some confidence, though it must be said that I’m rubbish at card games.  Picking poker faces is not really a strong suite of mine. 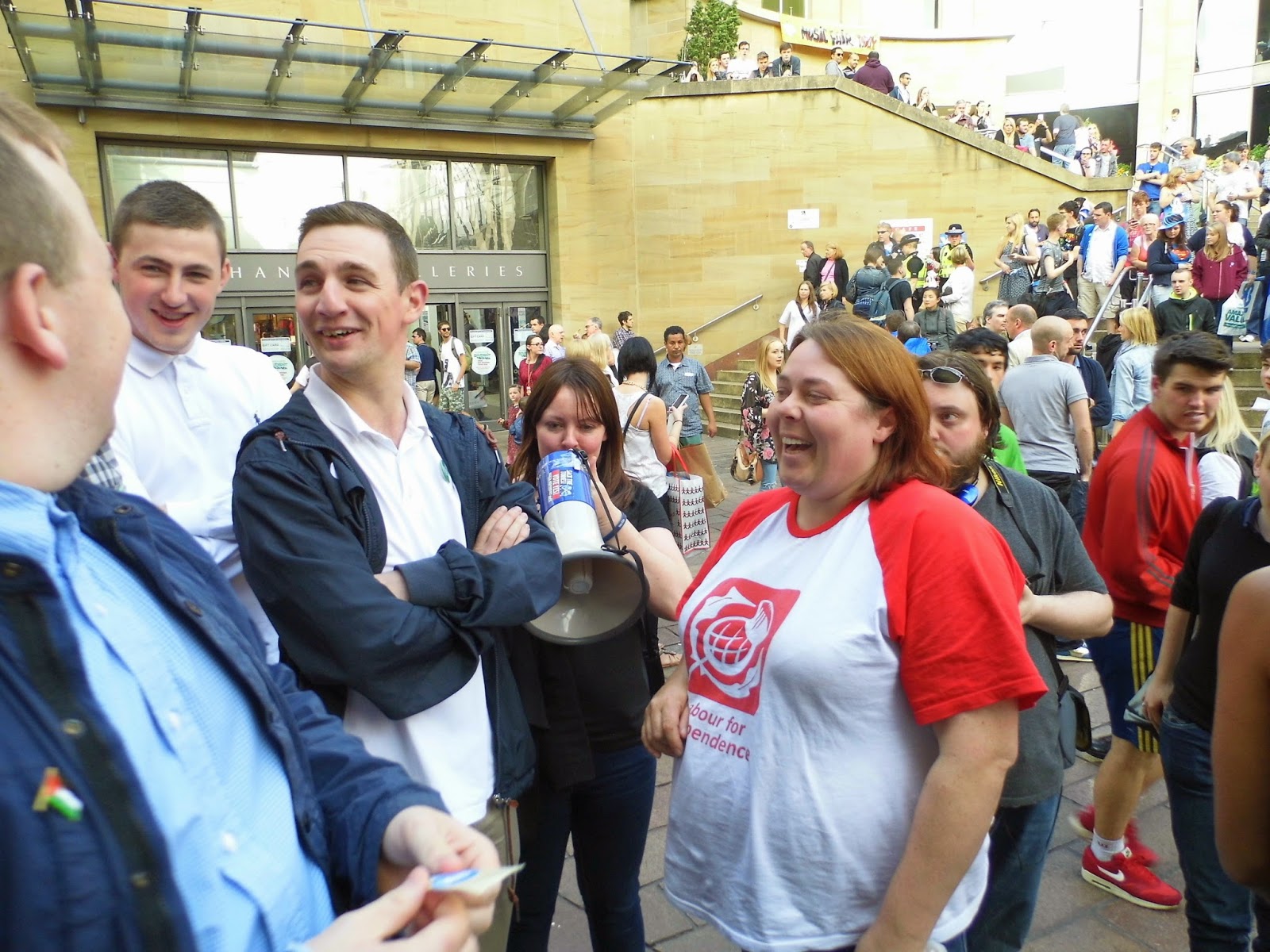 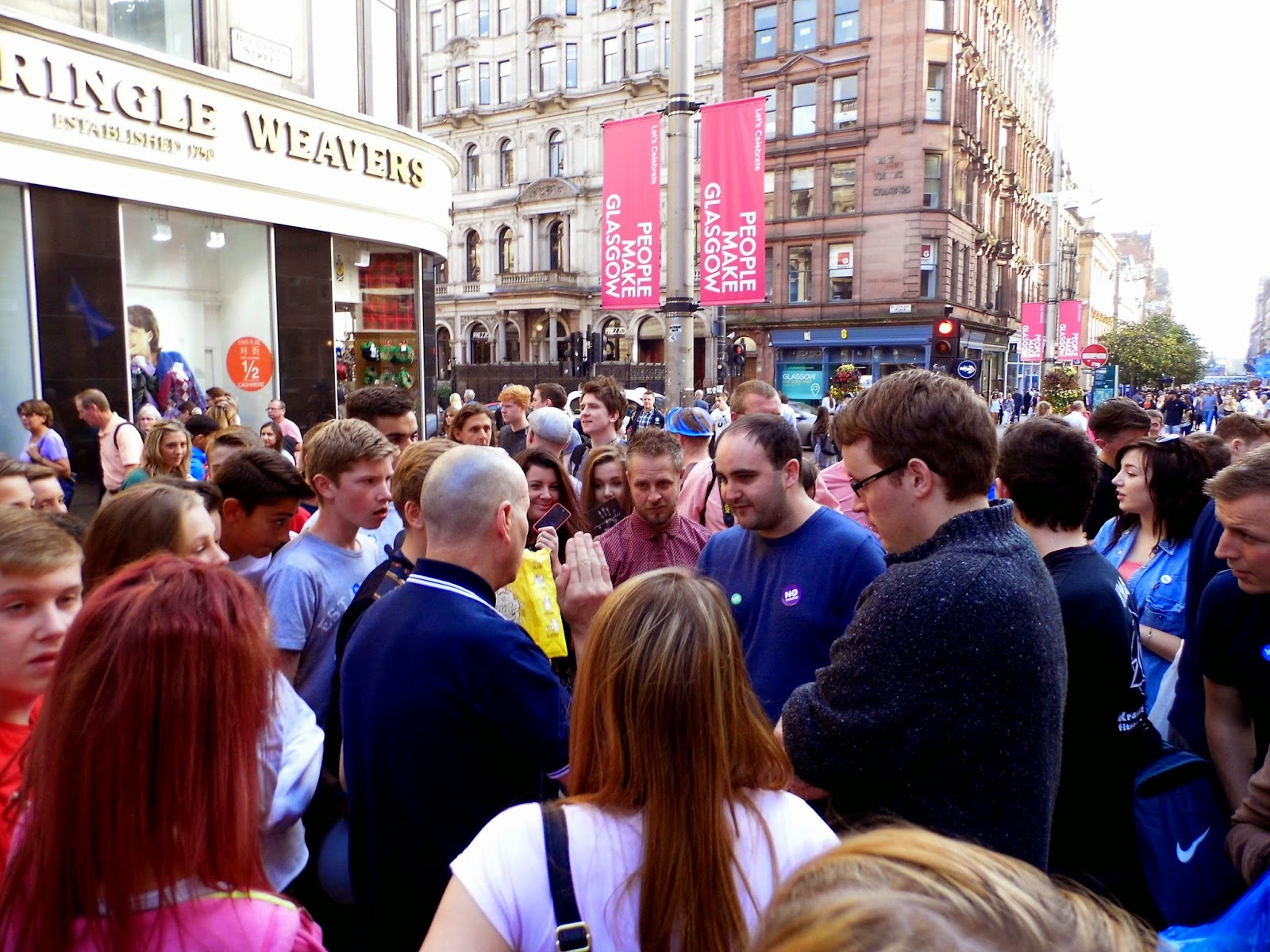 One of the things the pro-Indy supporters couldn’t tell me was where to get some decient Humble Pie.  Long time readers will know that I’ve long thought that Scotland will vote no, regardless of how I vote.  I still think that Scotland will vote no, but It’s more because us Scot’s are world class at defeat from the jaws of history moments.  Our history is littered with such moments.  Maybe my own natural pessimism is coming through too tied to a suspicion that a Quebec style wobble will happen.  Quite how when Better Together have rather than plant reasonable doubt have gone straight to the scare stories is beyond me, but there are still people out there who believe we are too wee and too poor. 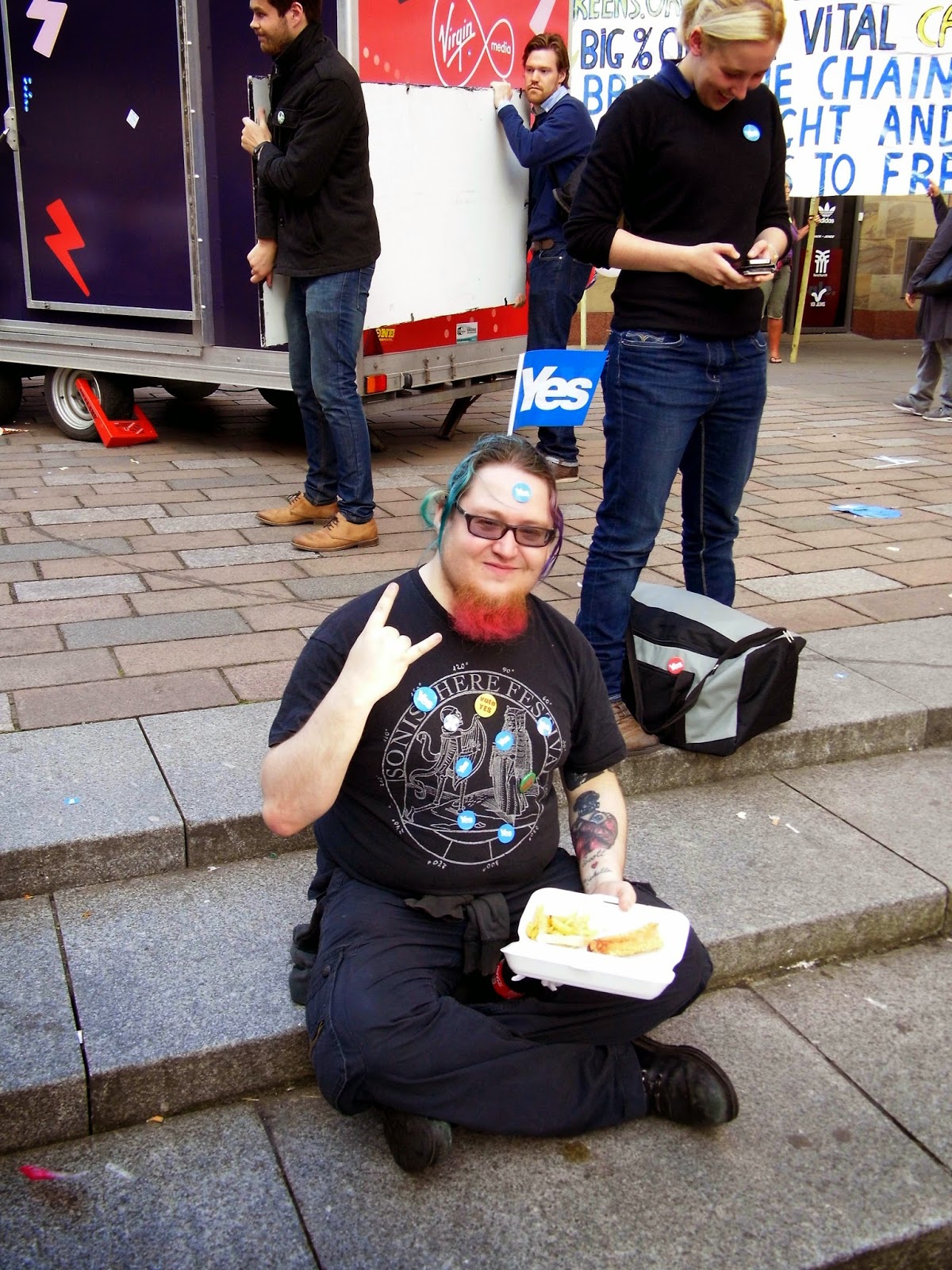 Saturday though was political process at the coalface.  I’ve never seen anything like it and made me happy to be Scottish.  Someone should have been bottling that, as that vibe won’t be there as the week goes on and the nerves kick in.  In the meantime, Saturday was Glasgow, nay Scotland at it’s finest.
Posted by Allan at 23:00