How To Torpedo "The Leaders Debates" In One Easy Step 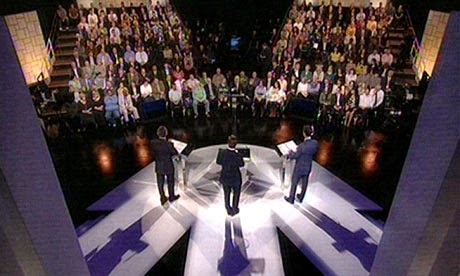 The first thing to recognize is that four years ago, the format was not perfect but was the best fitting compromise available.  Yes, the SNP and Plaid Cymru were excluded from the debates – and arguably their vote suffered as a result (though their undignified but justified winging probably did not help their cause).  However the biggest pan UK parties took part.  While it was a stretch to imagine Nick Clegg being asked to kiss hands come the day after the election, his Lib Dems were defending 62 seats and the polls were pointing to a tight election.

And I think the same format would have worked again…  just.  Three debates with Cameron, Milliband & Clegg, with maybe the only change being that the debates be a wee bit more spaced out rather than on consecutive Thursdays.  But the justification remains for excluding the pro-Nationalist parties from the main debates, even if there’s little justification for the half arsed 30 second soundbite handed to the “minor” parties as a sop to them and the regulators.  A proper right of reply is not the half assed 30 seconds they got last time around.  With those tweaks, the “Leaders Debates” could have run again.  So why the broadcasters risked the debates not happening at all by including the only party leader that wishes it was still 1957, Nigel Farage?

Lets not forget that in spite of the hype and hyperbole, UKIP only won their first by-election last week.  While the UKPR website puts UKIP’s average polling figure at 16% (double the Lib Dem’s current polling average), the don of Scottish psephology,  Professor John Curtis, sees their polling figures here in Scotland at a mighty…  4%.  All in all, it’s not exactly the performance that the SDP put in during the run up to the 1983 Westminster Election.

Indeed, what the broadcasters have done is put the series of debates at risk.  The Green Party, who will be defending Caroline Lucas’ Brighton seat next May, are already openly discussing legal action over their exclusion.  Not surprising given they will still be smarting at UKIP’s somewhat favourable exposure during the European Elections.  It also opens the door to the Nationalist alliance joining the Greens/Scottish Greens in the courts.  Given that the Scottish courts banned a Panorama interview with John Major in 1995 (broadcast the week of the inaugural single unitary council elections), certainly the SNP would have a chance of getting the debates banned here in Scotland.  And (this has somewhat eluded dear Doris here) this has added legitimacy to the SNP’s arguments to be included – give they have currently 6 times as many MP’s as UKIP.  Indeed, add Plaid to the mix and you would have 9 MP’s in that nationalist axis.  Much much more than UKIP hold, even if their 16% does translate into votes come next May.

The broadcasters clearly need to go back and rethink things.  Oh, and there should be a debate with Cameron, Milliband and the Westminster representatives of both of the nationalist parties.  In the meantime, good luck with putting the Farage genie back into the bottle…
Posted by Allan at 11:00