A Muddle And A Fiddle


So, the morning after the night before.  I’d been woken up by a text from my sister after…  well an hour’s dozing.  Turned on the radio, caught Darling’s victory speech, then Cameron’s pronouncements on the referendum result and instantly thought that the setting up of The Smith Commission was doomed to failure.


And so that has come to pass. 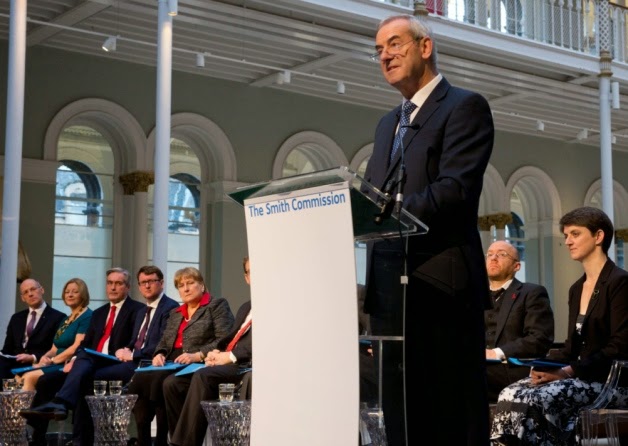 It’s not just the ridiculously tight timescale which put the shackles on any meaningful debate on what powers should be repatriated to Holyrood.  For that we can blame Brown and his speech that name checked every significant date in Scottish history between the referendum and polling day next May.  St Andrew’s day, check.  Burn’s Night, check (doubly significant given the events of Burns Night 1978…).  Nope, we can also blame the Westminster parties for putting their own electoral prospects before the people of Scotland.  As a result we have a report that pleases nobody.


Sure the representatives of the cosy right wing consensus at Westminster are pleased.  There are some powers that will be coming northwards.  However for the most part, it feels like a mess and a disaster waiting to happen.  Devo-Max it ain't, which lets not forget is the settled will of the Scottish people.


An example of where compromise has got in the way of a thoughtful process is in the area of taxation.  The logical conclusion of this process should have been fiscal autonomy, or a process with that as it’s destination.  Instead, Income tax only is to bee devolved.  Except it hasn’t, as control of the bands remain with Westminster though Holyrood does have control over the rates.


I say compromise.  I can’t think of any other word to describe what happened to the proposal to devolve the Universal credit.  A proposal that was torpedoed by Duncan-Smith at Wednesday’s cabinet meeting.   Labour were quite happy to see this remain at Westminster as is evidenced by their reaction to the report which further undermines their claim to be the protectors of the poor.


I think there'll be another referendum within 10 years. Cameron's just sown the seeds of that. #indyref
— Allan Moore (@Greenrhino3) September 19, 2014

For the benefit of hard-line no’s, disappointment at the result of the Smith report is not confined to hard-line yes people.  The Unions have voiced disappointment at the torpedoing of proposals for a separate “Scottish” Health and Safety executive.  The Third sector voiced disappointment at missed opportunities and the general lack of a radical streak.  The most interesting contribution came from the BBC’s Gordon Brewer who noted that the proposals for Scottish involvement in UK Treasury matters had holes through it and drove a coach & horses through EVEL.  In short, most Scottish people can see through the mess that is the Smith Report, and recognise that it falls short of expectations.


For all that the pro-Union parties claim that substantial powers will be brought north, the truth is that the proposals do fall short.  My first reaction to Cameron’s announcement was that the PM had just sown the seeds of the next Independence Referendum (above).  Nothing coming out of the Smith Commission has changed my mind.  Where the final argument that will result in that referendum and Scotland leaving the UK will come from is still in the fog of the future.  What is certain is that Westminster have misjudged the mood of the Scottish nation.  We might have voted to stay in the union, but rather than the settled will of the Scottish people we have put the union on probation.
Posted by Allan at 11:00