The Rebirth of Gordon Brown


Tuesday night saw social media ablaze with the antics of four SNP Councillors who, probably royally annoyed at the poor Smith Commission recommendations, decided to demonstrate their displeasure by burning copies of the Smith Report.  As the condemnation rained down on them from Labour supporters, one thought popped into my head.  At a time of austerity, of torched earth, of their own party agreeing pretty much with a lot of the Conservative’s policies and of rising stars of their party feeling the need to take freebies from corporate accountants…  is four councillors demonstrating against a not very good set of devolution proposals really more offensive than those things I’ve listed? 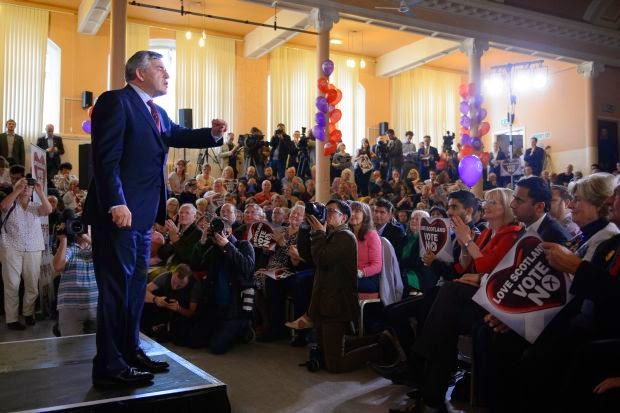 The sight of Labour supporters fulminating and creating showed how far Scottish Labour had fallen, as if they needed any more reminding the week their one time bright star Gordon Brown announced his intention to retire from the Westminster parliament.  In among all of the pre-death obituaries a strange thing occurred to me.  Gordon Brown’s stock has actually risen since the events of 2010.

In the run up to the 2010 Westminster election, Brown was seen as pretty much the villain of the last years of the Labour government.  Being made to be the scapegoat for all of the UK’s economic woes was the root cause of the opprobrium poured at Brown.  That Labour was, not so much at fault but created the conditions for the credit crunch to take place seems to have bypassed people.  When Kaye Adams asked, on BBC Radio Scotland’s Morning Call Kaye thingy, for the three words that sum up Brown how many people used the three words that cursed Brown’s time in number 10 – Light Touch Regulation?

It’s difficult to describe how disliked Brown was among the blogosphere, perhaps Milliband knows how he feels as he has lower polling ratings than Brown.  The UK’s top political blogger, Guido Fawkes, even has two monikers for Brown.  “The one eyed son of the manse” and Jonah Brown.  So how did the person that sowed the seeds of the crash end up with his stock rising.

I think the first pointer was that the current government have quite obviously set themselves up along the very same lines as the Blair/Brown government.  Cameron let slip early on that he thought of himself as the “heir to Blair” and absolutely everything he has done has followed the Blair playbook…  badly.  This extends to Osborne, who delivers his Budgets and Autumn statements as a homage to Broon.  Announcing pre-announced spending priorities, check.  Double accounting, check.  The statement that falls apart within days, check.  Yup Osborne is the new Brown.  Yet, for all of Brown’s supposed unpopularity, Cameron could not seal the deal and win an outright majority.

Yet Brown’s darkest political moment gave a sighter of his rehabilitation.  In among all the stats about 2010 two things stick out.  Obviously I’ve mentioned that Cameron could not win a majority.  It’s a theory of mine that Brown lost the election – in spite of economic competence – on the streets of Rochdale.  From Rochdale onwards it looked more and more likely that Cameron was pulling ahead – though a look at the polling shows this came from the Lib dems and not Labour.  The other thing was that the Scottish results under Brown bucked the trend of Labour’s eroding vote.  As I’ve said before, Brown put on 2.5% points in 2010 from Blairs performance in 2005.  It’s this reason that the SNP’s task in taking seats off of Scottish Labour is difficult.  The simple reason for that is that Brown is still a trusted figure among the solid Labour voting community.  Come the referendum Brown would be a key weapon.

Except that Better Together stuck with their flawed arguments.  It was only when the polls seriously narrowed that Brown began to move to the centre stage.  In truth, while Scottish Labour has been accident prone and frankly not fit for purpose, Brown was the one Labour politician that was Salmond proof and able to hotline directly to those solid Labour voting people.  Pro-Independence supporters are in the process of developing a complex about the vow, but a look at the Ashcroft polling shows that Brown and “The Vow” had little effect as a decisive factor.  Where I think Brown and “The Vow” was a factor was in stopping people from changing their mind and voting “Yes” – in other words “soft” No voters stayed in the “no” camp come voting day.

So Brown came, made some speeches, was key to the vow and generally saved the Union, adding to the perception that he had saved the banks.  Except that like the banks – who have gone back to behaving as they did before – the Union has gone back to the way it was before.  Labour politicians desperate to have a go at “the enemy” (the Conservatives) but being unable to because of the upstart SNP.  All of which brings us back to Smith and the act in haste proposals which some SNP people wish was turned to ashes (there may be time for that yet).

In spite of all the sneering, it’s beginning to look like Gordon Brown might emerge with something approaching a legacy.  Partly this is helped by his successor’s performances in office and also his predecessor being unable to remove the Iraq shaped millstone.  Certain left wing commentators were keen to make the case that it’s Brown and not Blair who will emerge as the heavyweight figure of the New Labour years.  However those commentators gloss over Brown’s own version of Iraq – Light Touch Regulation.
Posted by Allan at 11:00