Intruding At The Wake


Watching the initial skirmishes of the latest Labour Leadership campaign, you get the impression that both the politicians and the Labour ‘supporters’ in the media can’t quite get their heads around how and why they lost last months Westminster Election.  The media driven narrative, that Labour were too left wing and pointedly ignored aspirational voters, ignores the post referendum political landscape in Scotland.  Yet three of the leadership candidates come from that Blair/Brown New Labour ‘tradition’ and seem to be receiving luke warm coverage at best.  Only the brazenly socialist Jeremy Corbyn seems to be garnering more coverage, and none of it good. 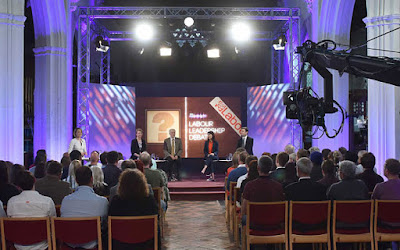 It’s this background which sees Newsnight organise a leadership hustings event in this elections version of ‘Basildon’.  It became clear early on why Corbyn is seen as a dangerous figure among those driving that particular narrative.  He defended immigrants (before being cut off by moderator Laura Kuensberg, who did not have a great night), he said Labour had been cowed by big business and said that Labour leaders should subject themselves to the democratic will of the party every couple of years.  In the section on leadership, where the standard bearer for a successful Social Democratic leader was our own First Minister, Corbyn listed the platforms he’d shared with Sturgeon. Principally on Iraq and on anti austerity marches.  You get the impression that it was a long list.

Yip, I know.  Sturgeon has well and truly arrived in the national consciousness.  It is striking that Sturgeon is now seen as the standard bearer among left of centre votes as to what a left of centre leader should look like.  That’s clearly not the view of the candidates (Corbyn apart) who put clear policy water between themselves and Sturgeon.  Still, it was a passage to have Scottish Labour members & various Cyberbritnats shifting uncomfortably in their seats.

For all that Corbyn spoke more sense than the other candidates, he did not really strike me as being leadership material.  None of them did, truth be told.  The one campaign though that looks as if it might be in trouble early on though was Andy Burnham.  He looked nervous and didn’t look as if he controlled the debate.  The tone was set when his opening speech overran the allotted 45 seconds.  After that he looked a bit rattled and retreated into bland, beige answers.  A sure sign of the trouble Burnham was in was the reaching of the “common man” stylings last used to devastating effect by one Jim Murphy…  er.

Given that I’m not a big fan of Liz Kendall, I find her New Labour stylings truly awful, I was surprised at some of the sense that she spoke.  On benefits she spoke of the need that people need to contribute (tax revenues I’d think) before they can take claim benefits and she also pinpointed a key issue with this country – that we are too much of a low wage low skills economy.  Essentially the UK’s too wee and too poor.  She also caviated the proposed surplus law (not that there should be one mind, Kendall didn’t oppose this measure).

That’s not to say the perceived criticism of Kendall swallowing the Tory manifesto as whole is entirely untrue.  Her perception of the economic arguments are grounded on Osborneomics and are not really the viable alternative we were craving from Labour.

Coming out of this debate as the favorite is Yvette Cooper.  Her pitch was that this needs an experienced hand with new ideas and her arguments were aimed at a centre-left constituency, more so than Burnham or Kendall.  Like the others though, there’s not really an obvious sense that this is the next leader of Labour, far less someone who could remove Cameron or his successor from Downing Street in five years time.

While there are plus points to all of the candidates, there is one overriding question that none of the candidates looked like answering.  Could they formulate a potential alternative government that would win votes in the South of England as well as regain votes in the North of England and Scotland’s central belt?  While you can’t really tell anything about how ideas and campaigns will develop from a 60 minute hustings at the start of a campaign, you can tell that Kendall would be really dangerous if she had even an ounce of Blair’s fabled political nous.  You can tell that Corbyn is only there to keep the other candidates honest.  That the Burnham campaign is in difficulty already and that Cooper has emerged as the favorite to win.
Posted by Allan at 00:01