Other than viewers in Scotland, there was only one winner out of last months General Election.  This much has been clear as Cameron unfurled the first full fat Tory Queen’s Speech since 1996 and the clock has felt as if it has wound right back to that period.  Channel 4 even put on an update of it’s most famous programme from that period, TFI Friday, at the weekend.  Thankfully the revival in Dad-Rock has not appeared… yet.  Lord preserve us from the Shed Seven, Kula Shaker or Sleeper revival. 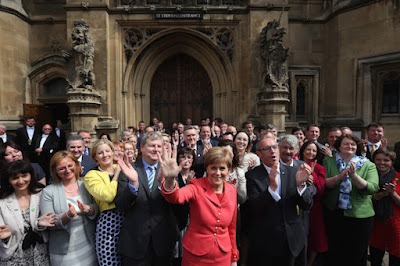 So what are we to make of the other winners from last months elections, the Angus Robertson led SNP group swelled to encompass all but three of the Scottish Westminster contingent.  For all that Sturgeon is the SNP’s leader & co-ordinator & chief, it will be the Corporal Jones styling’s of Angus Robertson that will be the public face of the SNP at Westminster.

So far the SNP have attempted to install themselves as the unofficial opposition to the government, with something of a temporary vacancy for that position thanks to Labour’s navalgazing about how much of the Tory manifesto they can agree with before the rank and file revolt.  So far any chance to oppose has only come with the Government’s two big constitutional questions – on the conversation of the Smith Commission into law and the EU referendum.  Both have produced mixed results.

With the Smith Commission proposals the SNP clearly relished the opportunity to flex their knowledge of the Scottish psyche and to outline just why more powers are the settled will of the Scottish people.  The SNP also seem to be not recognising/ignoring the warnings of a deficit and of a black hole in Scotland’s finances should they succeed in gaining full Fiscal Autonomy for Scotland.  This is an issue that the SNP contingent can wrap their chops around…  er… (commons votes prohibiting).

With the EU referendum, the SNP have shown their one eyed love of the EU.  They are correct to press for suffrage for 16year old's and for EU nationals for this plebiscite, but to vote against the referendum simply because of the exclusion of EU nationals seems like pedantry gone mad.  I’ve previously argued that the SNP seem quite content to accept Thatcherism smuggled into Scotland by the EU and their argument against the EU referendum seems to confirm this view.  Even though it would fall on deaf ears, it would be nice for the SNP to show a vaguely Eurosceptic streak in arguing against some of the privatisation agenda forced on to Scotland.

Other than FFA, talk continues about the possibility of a second independence referendum, possibly during Sturgeon’s first full term as FM (given the shattered state of something called Labour in Scotland – an SNP victory next May is highly likely).  Stuart Winton has argued that the government should go for an early second referendum to try and settle the issue for an generation, while pro-Indy supporters think one should happen if Scotland votes to stay in the EU while the rest of the UK votes to exit the EU.  I disagree with Stuart because I think – if you’re looking at this from a pro-unionist point of view – if they push for the early referendum it will backfire on them.  I think the SNP realise this which is why they think the EU referendum will provide the next set of events that will lead to the second Independence referendum.  I also think that the pro-Union parties haven’t covered themselves in glory with the Smith proposals

As for the EU referendum scenario, I don’t think that will play out.  For starters, polls still suggest an advantage for staying in the EU.  That may change if the pro-EU teams employ Blair ‘Jonah’ McDougall or some other unknown unknown surfaces.  And I also think that this is an issue where Scot’s are not that far out of kilter with the rest of the UK.  I think the trigger point for Indyref 2 will be more to do with Westminster’s intransigence towards Scotland and their inability to stop themselves inserting their collective foot into their mouth.  Last night’s series of votes on the SNP’s amendments to the new Scotland Act being a possible starting point.

With the next Holyrood elections a dot on the horizon, the SNP could conceivably sit back and watch Labour fall apart while the votes roll in.  They’d be wrong to do so as I’d think Scottish voters would quite like to see the SNP come up with policies non-Independence related.  A successor to the Council Tax would be good.  Action on sliding education standards and in tackling the failing Health Boards & NHS management would be very welcome.  Some sort of easily accessible standards body for local authorities would be good as well, because our local authorities are just not transparent enough.  This will also be the first Holyrood elections where tax and the economy will be policy based issues, so outflanking Labour in the progressive taxation stakes should be a priority for the SNP.  In short, there’s scope there for the SNP to change up and not coast through the next parliament as they have done during this parliament – referendum aside.

I’ve said previously that the SNP are currently in their imperial phase – where everything is possible.  That will not last, Labour you would think will stop digging their graves.  In the meantime, the SNP should learn one last lesson from New Labour, being effective managers of policy & public services is one thing but if you don’t have a big policy initiative/vision then you might not be in control of your legacy.
Posted by Allan at 14:00