A Line Has Been Crossed

There is an element of elections I enjoy and look forward too. With this referendum though there has been a growing sense of dread as, firstly the Remain campaign had lost the plot, and secondly the Leave campaign lost it's sense of decency. I was planning on writing about how this referendum was a very poor fourth rate version of the Independence referendum two years ago. 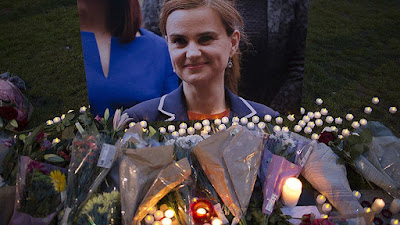 That was before the events of Thursday, which saw the Labour MP Jo Cox attacked and killed.

Truth be told, I hadn't really heard of her. A year into her first term as MP, she will have been expected to have been just making her way in politics. The fulsome tributes tell a different story though. A story of someone that could have gone far. If the tributes are even half true, our tragedy is the one of not knowing just what she could have achieved. Possible future leader? Possibly the first woman to be a Labour Prime Minister? The left wing version of Blair/Thatcher that us lefties have been craving. That's the thing about the death of someone young and pretty much at the start of their time, it all looking at what has been done already and extrapolating things from there.

The murder of Cox will have serious repercussions.  There have been five MP’s murdered in the past 40 years – all at the hands of the IRA.  The Tory MP's Airey Neave (just before the 1979 General Election) & Iain Gow (in 1990) were assassinated by car bombs, Anthony Berry was the only MP to perish in the bombing of the Grand Hotel in Brighton during the Tories party conference in 1984, while the Ulster Unionist MP's Robert Bradford & Edgar Graham were shot by IRA gunmen in 1981 & 1983 respectively.  Those attacks and others led to a tightening of security which began the process of politicians becoming ever so slightly removed from the general population, the gates at the bottom of Downing Street being the first sign.

You do hope that this attack doesn’t create a bigger gap between our politicians and the electorate.  The minority of politicians that allow themselves to become insulated from the general public brings down the public perception of every politician.  With more security, it will further exacerbate the divide between politicians and the public.  By all accounts, this was something Cox was very keen on avoiding – the pictures of her with a local cricket team shows that she was keen on being an integral part of her community.

The most immediate reaction to her death though is being felt on the EU referendum campaign.  Cox was a campaigner to improve the lives of refugees and spoke in favour of more refugees fleeing Daesh coming to this country.  Views like those, perfectly sane and rational to a great many people in this country, would be seen as vile & treasonous to a minority.  Principally the minority that have been roused by UKIP’s distastefully poisonous and duplicitous campaign during this referendum.

There is a suspect, and the police are currently investigating the assassination.  There are however some ‘facts’ that have come out into the public domain.  There are also things that have appeared on social media.  While investigations are ongoing, we should be wary of straying into sub judice territory.  If the rumors/information proves to be correct and the suspect is charged and convicted, then both UKIP and the right wing fringe group Britain First will find itself at the centre of a storm of epic proportions.

Let us suppose that the suspect was involved with Britain First, there is photographic evidence that he did appear at demonstrations though his involvement further than this has not been correctly ascertained at this point - his claim in court this morning being the first confirmation that those rumours are true but no confirmation of the extent of his beliefs in the aims of, or involvement with, Britain First.  If this plays out the way things look like going, a group previously seen as right wing rabble-rousers will now be seen in the eyes of the British public as a terrorist organization.  For Britain First, and possibly for UKIP as well, a Rubicon has been crossed and while they were never given very favourable coverage.  If they are found to have played any part in this assassination, then there will be outright hostility to them from the authorities and the public at large. In effect they will be very much persona non grata.

Regrettably though it also looks as if some people will be intent in blaming, not just the official Leave campaign – which is deserving of the criticism for the UKIP-esque lowest common denominator campaign they have ran – but Brexiteers as a whole.  This attempt to shut down a part of the debate smacks of censorship at it’s very worst.  I completely disagree with the strain of Euroscepticism which is rooted in a fear of foreigners, but it’s not my fault the ‘remain’ side have proven to be completely impotent in the face of Johnson, Gove & Farage’s dissembling.  Look, I did point out the flaws in their deliberate conflation of free movement and immigration – it’s not my fault nobody thought about using the flaws as a basis to debunk these arguments.

Like the Independence referendum nearly 2 years ago, things will not be the same again in the aftermath of this referendum.  Even before Referendum Day, the political landscape has been altered by the killing of Jo Cox.  Something has perceptively changed in UK politics, where violence against politicians is now acceptable to some people.  There is now the real prospect of something dark happening to this country in the aftermath of next Thursday’s vote.  The show will go on, the victor will take the spoils, but something has been lost in the battle that we will never ever regain.
Posted by Allan at 11:00