There Used To Be A Political Party Across There


In the current fluid political climate where everything is up for grabs, the only certainty is conventional wisdom.  Usually delivered by sober political commentators in what used to be described as “the dead tree press”, by a blogger now working for the selfsame “dead tree press”.  These tablets of wisdom define political thinking.  That these self same commentators have got so much wrong seems to have no impact as another piece of conventional wisdom is brought from above. 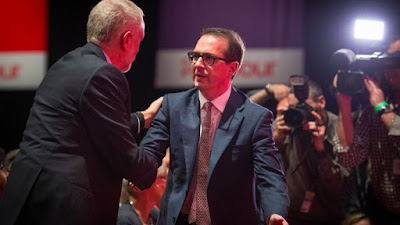 The question that no one asks is what if one of those pearls of wisdom is proven to be utter hokum.  There are two pieces of wisdom which are not correct.  The first one is the wisdom which dictates that “Oppositions don’t win elections, governments lose them”.  This may well have been true in the 1950’s or 1960’s, but has been proven to be not true since…  well the most unpopular politician in the country won a 144 seat majority in the morning of June 10th 1983.  However the pearl of conventional wisdom doing the most political damage, indeed the one which has effectively destroyed the Labour party, is the assertion that parties must pitch their tents on the centre ground to win elections.

The belief in this has essentially led to a movement within the Labour party designed to keep Labour firmly on the centre ground of UK (or more accurately English) politics. The Progress group has been set up specifically with the aim of keeping Labour firmly to the old SDP model of a centre (not left) party.  The problem with Progress winger’s interpretation of centre ground politics is that it alienates left of centre voters and sidelines the left of centre view point, happy to write people with that viewpoint off as extremists and that old canard, “trots”.

The reason that I think this piece of conventional wisdom is utter hokum is a simple reason.  If General Elections were really won on the centre ground, then how do we explain the election victories of Attlee (won from the left) in 1945, Thatcher’s three election wins and Cameron’s win last year (all won from the right).  True, these are exceptions, but these exceptions show that it’s not centre ground politics that’s the important thing.  It is having ideas that will win over middle ground voters that is key.  This is why as a lefty I can’t forgive the Blairites for not even attempting to bring UK politics leftwards like Thatcher brought the country rightwards in the early 80’s to the political position it currently occupies.

Labour’s issues then are rooted to frustration with that centralist dogma, which refuses to realise that the country is not the same country that it was in 1997.  Indeed, as I’d pointed out in a previous post, the conditions which the kind of third-wayism would previously have thrived as an electoral force do not exist.  Thanks to 9 years of recession and austerity politics, the political landscape is now being cleaved between left and right.  The centre ground has simply disappeared into a hole firmly of the Lib Dem’s own Blairite tendencies making.  Indeed it is telling that the Progress wingers are looking to set up their own party from scratch, rather than outright defect to the Lib Dems and join up with their Orange Book kindred spirits.  Ironic then given that the Lib Dems themselves turned their backs on Orange Book-ism when they elected Dim Farron over the Orange Book candidate Norman Lamb last year.

This dogma seems to have clouded the Progress wing’s every thought, with the possibility that the next Westminster Election might be sooner than May 2020 concentrating that wing of the Labour Party to such an effect that they appear to have taken leave of their senses and utterly torpedoed any residual chance Labour had of winning the next UK election.  Indeed, the chances of… well any centre left politician taking the trip to Downing Street, via an engagement to kiss hands with Mrs Saxe-Gothe-Coburg, is significantly less than the chances of Kezia Dugdales chances of becoming Scotland’s next First Minister.  Partly that’s down to May being, I think, an upgrade, both in strategic and political terms, on Cameron. But mostly that’ll be down to Her Majesty’s official opposition being in more bits than a 100 piece jigsaw.

It’s not just Labour’s electoral chances that have disappeared down the plughole, it is the reputation of those leading lights that have gone down the tubes.  Both Burnham and Kendall are seriously damaged goods from last years leadership election defeat, while Cooper should have had the nous to win that election but didn’t.  Like Healy in 1980, Cooper should have run a better campaign and reached out leftwards – just enough to head Corbyn off at the pass and enough to retain her own centre/right base.  Instead her campaign stuttered and started and only really came to life when Corbyn’s own momentum was unstoppable.  Sunk though those reputations are, they have not suffered as much as the reputational damage to Hilary Benn and to Angela Eagle.  Benn’s reputation was already soiled goods, thanks to his wholehearted support of military action in Syria, but became irreparable due to the Observer story which precipitated his sacking.

Eagle’s however is maybe more tragic.  It is conceivable that she could have been Labour leader at some point, maybe succeeding Corbyn, had she not joined in with the Progress plot.  The first Labour politician to be any good at PMQ’s since Blair and showed a consistent ability to get under Cameron’s skin. Yet she’s shown the same lack of political nous as the rest of the Progress wing brigade.  Maybe, for once, Blair’s representative on Planet Earth, John Rentoul, has a point when he says that Eagle would have been a better candidate than the eventual candidate of the right, Owen Smith.  Smith’s campaign from the start has been one disaster after another.  The casual sexism, followed by the casual homophobia, followed by the gaffe over negotiating with Daesh all contributed to Smith’s long predicted defeat only confirmed in Saturday morning.

At the heart of Smith’s campaign though, there is now a very real sense that the Progress wingers and their cheerleaders in the media still haven’t grasped the new political landscape in this country.  From the Independence Referendum two years ago to the EU referendum and the subsequent release of the Chilcott Report, there has been an earthquake that has altered the political landscape, destroying the conditions that enabled the third way to survive electorally.  Third Way politics is now a toxic brand in the UK…  or at least it is in England.  Third Way-ism still survives and thrives here in Scotland under the radically different curatorship of the SNP, but in England it is a political philosophy which is falling out of fashion.  Neither May nor Faron can be described as ‘Third wayers’.  Indeed, May’s inauguration speech smacked of being somewhat old school conservative in some ways, whilst also referencing Thatcherism.  Or at least the bits of Thatcherism that concerned itself with removing barriers to people getting on.

Of course, the charges levelled at the Progress wing of Labour are serious charges, their actions and behaviours have played a huge part in the troubles Labour finds itself in.  While their leaders have shown a lack of political nous and inability to change up which should worry any centre left voter.  Certainly, there is not one alternative Prime Minister among the massed ranks of the Progress hierarchy, such is the collective reputational damage those individuals have inflicted upon themselves.  There is, however, one figure who seems to be carrying on, in a quiet way, as if nothing’s his fault.  But then again, the only thing you can really pin on Jeremy Corbyn is that he is utterly abysmal at the actual act of leadership.

While it’s true that, politically, he’s a lot closer to my own views than Blair, Brown or even Milliband, that shouldn’t and doesn’t stop any critical faculties from operating, and there’s a hell of a lot to criticise about the vacuum that is the leader of her majesty’s opposition.  I’d previously mentioned that he’d not handled his first shadow cabinet appointments in the best, most astute, manner.  Whilst recognising that his party colleagues have went out of their way to make Corbyn’s job as hard as possible, Corbyn himself has not stepped up or shown any signs of leadership of his own. Maybe this election campaign has shaken him up and now takes the post seriously.  Certainly his acceptance speech on Saturday was a mark above any speech he has made in the past year or so.  For Corbyn though, the easy bit was Saturday.  The hard bit, that of rebuilding a shattered, lost, rudderless, divided, bitter and borderline poisonous party, is still to come.

Corbyn’s biggest challenge will be the resistance he will face, not from his opponents but from his so called party comrades.  The ‘Scottish’ Labour leader, Kezia Dugdale has already signalled her dissatisfaction with Corbyn whilst glossing over her (countless) own failures while former Labour figures from the Blairite past have begun their ritual sneering at Corbyn.  Of course, it is these figures which will garner media attention given the uncritical familiarity these figures have.  Already we have had fawning coverage from BBC, ITV and Sky news for public meetings behind pubs and in alleyways.

That the re-election of Corbyn is not seen for what it is – a vote of no confidence in the corporate sponsored world of the Progress Wing – shows precisely what little political talent these people have.  Labour’s disintegration, being pulled apart by the shuddering tectonic plates of UK politics, has brutally exposed Labour’s own split loyalties and aims.  In one sense, it doesn’t really matter which left wing candidate was chosen to run.  If they had won, they too would have suffered from the campaign designed to undermine and to show that the Blairites were the only people who could win.

In the meantime, we still have Corbyn, and for the moment he is the face of the destruction of the UK’s so called centre/left party, even if there are a lot of people on Labour’s right who have done much more critical damage to Labour’s structures and reputation.  If anyone questions Corbyn’s rumoured plans to purge Labour, they should gently be pointed in the direction of the people who for completely selfish reasons are engaged in acts of sabotage on the party they profess to love.  There used to be a party of the working person to your left, and whether you are a Corbynista or a Progress Winger, the chase for middle class votes at the expense of the working classes and those adjacent to poor has done more to (fatally?) erode so called ‘Labour values’ than an old school left winger from North London.
Posted by Allan at 13:00