Last week’s announcement by David Cameron that he is to step down as MP for Witney saw another bout of retrospection on Cameron’s time in Number 10.  Among the reminiscences was his part in the Scottish Independence referendum, now 2 years ago.  To say his part appears to have been built up is perhaps the diplomatic way to put it. 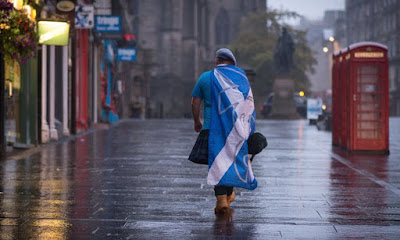 In truth, Cameron was a ghostly presence during that referendum.  His total output being not very many visits north in the run up to the referendum and no meet and greets – with engagements behind closed doors and in office blocks in Edinburgh’s financial district.  In truth, the claim of supporters of Cameron that he saved the Union is a completely hollow one.  Gordon Brown, the now notorious ‘The Vow’ and the SNP’s policy positions on currency and the EU all played their part in the no vote confirmed two years ago today.

Yet the defeated side, the SNP, are champing at the bit to put us through all of that again.  They have never come to terms with the result, let alone stopped to look in the mirror at their own failings.  Yet they are certainly ready to plunge us all into another referendum campaign.  A campaign that, I’d have serious reservations that they’d win with their current tactics and mindset.

The most striking thing about the SNP and their group of strident supporters is that there does not seem to be any evidence that they’ve learned lessons from two years ago.  True, there’s now a discussion on an Independent Scotland’s currency options.  But this should really have been the first port of call for the SNP.  Instead the (false) narrative that it was all the fault of The Vow and the dastardly ‘Scottish based’ media has been allowed to grow and grow.  The Vow certainly didn’t win the referendum, it just stopped the haemorrhaging of soft ‘no’s defecting to ‘yes’.  As for the media, well if the SNP had a spin operation as ruthless as the fabled New Labour rapid rebuttal unit, we’d be Independent.  Salmond & (particularly) Sturgeon relied far far too much on attacking bad business news as “scaremongering” rather than a concise rebuttal.

So, sort out policy positions and the SNP’s spin operation and a pro-Independence vote is all but assured, yes.  Well…  no.  The issues over Sterlingzone masked the SNP’s inability to win the economic argument.  That the businessman and part time blogger Kevin Hague was able to undermine the economic case for Independence whilst showing up the bloated and grandiose Business For Scotland into the bargain shows that the SNP should have prioritised the winning of the economic argument much more.  It’s something that I may come back to, but even though I take different conclusions from Hague’s figures.  It is his delivery and presentation skills which showed up Business For Scotland’s leaps of logic from figures to conclusions without any workings.  Hague and his approach is something the SNP will possibly need to learn to love given the deteriorating deficit and the state (on figures built on the poor performance of the UK’s revenue service it has to be said) of Scotland’s finances.

The SNP’s biggest problem though is the concept of ‘material change’ and their own interpretation of it, versus the general population of Scotland’s interpretation.  You may have noticed that in June there was another referendum, this one on the United Kingdom’s membership of the European Union…

Well, this referendum produced a victory for those people wanting to leave the EU, by a victory margin of 3.8%.  Both England & Wales voted to exit the EU while both Northern Ireland and Scotland voted to remain within the EU.  Indeed, Scotland produced the biggest pro-EU vote (in percentage terms) within the British Isles.  62% of Scots voted for the UK to remain within the EU.  And this appears to have given Nicola Sturgeon the green light to talk of material change and a second Independence referendum being “Highly likely”.  It’s just that 62% seems like a light figure to be talking about material change.

I’d previously speculated that Sturgeon might be surprised at how alike Scotland and the rest of the UK are in terms of attitude towards the EU.  I’d also though that if Sturgeon was to successfully prosecute the material change line, then about 65% would have been the minimum figure that they had to get.  Lets also factor into the equation the left leaning eurosceptic’s voting remain out of a desire to spike the prospect of a right wing hard Brexit and wholesale deregulation of working practices and human rights.  Add in the stat that, according to Michael Ashcroft’s polling, we think that as much as 36% of SNP voters (at the last Westminster election) voted leave.

Added together, this makes Sturgeon’s claims of a Scotland 100% behind the European project a flimsy one at best.  If you take into account the theory of the eurosceptics voting to remain because of the prospect of a right wing takeover, and this was a view advocated by Owen Jones, Paul Mason and Iain McWhirter, then 62% doesn’t look like that big an endorsement of the EU that Sturgeon has been making out.  This also undermines her claim for the EU referendum to be a trigger for a second referendum, and certainly explains some of the lukewarm polling that this question has been gathering.  Indeed the average polling for Independence has now settled on 48% - a gain of approximately 3% and far short of the 60% target set by the First Minister.

The only argument where the SNP’s actions make any sense whatsoever is the argument that says that Sturgeon is on manoeuvres simply to keep the hard-line Yes-ers onside.  That the hardline Yes-ers, agitating for a referendum re-run have been pressing for that since what they perceive as a material change.  That Better Together were correct in their claim that the only certain way for Scotland to exit the EU was to vote to exit the UK seems to have bypassed those hardline Yes-ers in much the same way that Scotland’s name appears nowhere on the various EU Treaties.  Otherwise, pressing for an early referendum re-run when the case is flimsy and lightweight makes no sense and would be a recipe for disaster.

If Sturgeon has the political chops that people believe that she has, she should wait.  Remarkable as it may seen, time is on the SNP’s side.  Given the state of the Westminster parties and the mess being made of the country, Scottish People could conceivably coalesce towards Independence as a viable alternative.  Of course, that’s entirely dependent on the SNP performing as a government like they did between 2007 & 2011.  If they do get their heads down and perform, if Labour continues to fall apart as a political party, if the Tories become the TINA party by default, if the EU referendum fallout continues to poison UK-EU relations and if there is no sign of the near federal solution promised in ‘The Vow’… then conditions could play into the SNP’s hands.

The SNP’s Indyref2 manoeuvrings do not look like a party confident and in control of events.  By aggressively attempting to re-write the post EU Referendum narrative, Sturgeon is displaying a lack of patience which will do nothing to attract the voters needed to bring the prize of independence. Scotland is already split down the middle between people who crave a second Independence referendum and those who think that it’s too soon for that question to be asked again.  Rather than pressing the issue so soon after the 2014 Independence referendum, the SNP should be looking at why they failed and how they should rectify the situation in the future.
Posted by Allan at 16:00