There is a figure who crops up time and time again in our media as a talking head.  We all know who he is, he was an advisor for Tony Blair during his final term as Prime Minister but other than that is a Labour person in name only.  Yet this person not only has a career as a fully paid up member of the Anglocentric commentariat but also a carer as a media and election strategist.  Quite why remains to be seen as he helped Julia Gillard to defeat in Australia, was Jim Murphy’s chief of Staff when Labour lost 40 seats to the SNP in the post-Independence Referendum Tsunami and was in America last month helping Hilary Clinton to defeat. 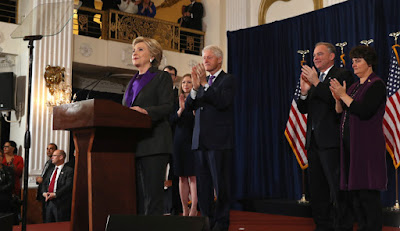 True, McTernan’s only electoral victory this decade is that he has had a hand in that Independence Referendum, but since then we have seen a shuddering earthquake which has dramatically altered the British political landscape.  I had previously argued that the Independence Referendum, the 2015 General Election, the EU Referendum and the Chilcott Report have destroyed the generation long political philosophy in this country of Third Way Politics.  You maybe know this as Neo-Liberal politics, or Blairism, but Third-Wayism is the term that I’ve gone for.  It was the philosophy of triangulation and of chasing middle ground/centre right voters (to the exclusion of centre-left voters) which won Bill Clinton the White House in 1992 and entranced two visiting British Politicians in the spring of 1993 – Gordon Brown and Tony Blair.  When Tony Blair became Labour leader in the aftermath of John Smith’s death over the summer of 1994, he shifted Labour rightwards adopting Clinton’s Third Way philosophies and adapting them with the values he & his advisors held, Blair surrounding himself with Lib Dem and previously SDP people – as a result creating New Labour.  It’s birth being traced to the scrapping of Clause IV.

If this brand of politics has now ended in the UK, then what do we make of it’s catastrophic defeat in last week’s US Presidential election?  Firstly, let us not make any mistake here, this is a defeat of Third Way Politics.  Bill might have been the President, but Hillary is reckoned to have been intellectually his equal at least.  For example Hillary had been a key proponent of the Democrats previous attempt to reform Healthcare, before collapsing in the face of a hostile legislature. Mostly though, the Clintons & the Democrats as a whole have been key supporters of globalisation.

If the Independence Referendum was a harbinger that the end of Third Way politics was on it’s way, then what has caused this sea change?  One of the drivers of both referendums and Trump’s victory has been the perception of key voter groups that they have been left behind and that living standards have not kept pace and that this has fuelled a desire for change.  That squeeze in living standards leads us directly to the economic event that began with the Credit Crunch and encompassed the global Banking Crisis.  That global recession has not been fully reconciled by the political classes.  There have been no changes in government macro-economic policy either here or in the US, there has been no lessons learned and there has been very little in the way of repercussions. If anything Moderates on both sides of the Atlantic have been the keenest defenders of low regulation within the financial sector.  They have, as well, been the keenest advocates for the new style of multinational treaty/trade deal.  The types that have the capacity to undermine public services and to dramatically slash the reach of elected governments around the world.  The EU’s own Lisbon Treaty being the first of this kind, being the treaty which brings the outsourcing and privatisation of public services into EU thinking and regulations.  Since then we have seen the evolution of both TTIP and CETA, both trade deals that gives corporate interests a means to undermine democratically elected governments. And deals wholeheartedly promoted and defended by the Third Wayers.

That the political landscape has changed only tells half of the story though.  If the third wayers were flexible in their beliefs to modulate their policies and negotiate the bumps in the road, we would not have seen what has happened to the Labour Party here in the UK or saw the rise of Trump.  In some cases the problem is the smug, sneering attitudes of those supposed moderates. We saw it during the Independence Referendum when the so called moderates sneered at pro-Independence supporters.  Granted, the SNP did make it easy to be sneered at with their White Paper which had more holes in it than a block of Swiss cheese, particularly the areas concerning currency & relations with the EU.  But that referendum was (or at least should have been) about who should govern Scotland, not about the SNP’s own policy preferences. The sneering continued even though it became clear that the so called Vow had been stiffed by Cameron during his 7am Downing Street speech, just minutes after the Referendum result became official.

The smug, self satisfaction continued throughout last years Westminster election.  Complacent within their own bubble, the so called Moderates comforted themselves over Labour’s election defeat with the thought that Ed Milliband wasn’t really one of us anyway.  He was dangerously left wing and didn’t follow the true New Labour doctrine, so that’s why he lost.  Well that was the attempted whitewashing of the election anyway when the likes of Peter “Dripping Poison” Mandleson, Chukka Umuna, Tristram Hunt and Liz Kendal swamped the television studios. It is also here that we see the start of a pattern that has been repeated since – that of a rotten, right wing candidate – unsuited to public office – winning election in no small thanks to the deficiencies of the opposition – partly adhering to neo-Liberal/Third Way policies.  The biggest deficiency in 2015 being Ed Ball’s signing up to Osborneomics.  Hook, Line and Sinker.

In the US, these mistakes were magnified 10 fold.  We had a populist left candidate (Sanders) who was manoeuvred out of Hilary’s way by a combination of Democrat party managers and by a misguided belief that Hilary was the best candidate to take on the Republican candidate.  Even when the Republican candidate emerged as the mouthy egomaniac property developer, Donald Trump.  He had made claims and policy pronouncements which are deeply worrying and will have deep repercussions on the United States and the world at large.  And yet during three debates Clinton could not deliver the knockout punch.  Clinton did not deliver the comprehensive defeat that she needed to put away Trump.  Trump was able to counter jab with accusations over Clinton’s judgement, over the signing of the NAFTA trade deal and the e-mail controversy.

Clinton should have went hard on Trump’s non disclosure of Tax receipts.  Hilary already had a dubious image within sections of the population, with allegations that she was involved in illegal activities going back to the Whitewater accusations in the mid 90’s.  The e-mails controversy was only ever a smokescreen to bring Hillary’s dubious image back into the front of people’s minds – so when the director of the FBI re-opened the investigations into the e-mails it was essentially game over for Hilary.

When Moderates pontificate on the media about Corbyn or Brexit or Trump we should remind them of their part in that.  If they were prepared to listen to the soft left and not denigrate those people, then Labour wouldn’t have Corbyn.  The same lack of respect also contributes to the collapse in Scottish Labour and the probability of another Independence Referendum within the next 3 or 4 years. If the Neo-Liberals stood their ground and stood up for immigration and multi-culturalism and not appeased UKIP, then we would have had a proper debate on the merits or otherwise of a rotten & corrupt European Union. If the Democrats had read the runes better and seen the collapse of Third Way politics better, they would have not aided and abetted a poor continuity candidate but would maybe have let the Democratic Primary process run it’s course and pick a candidate that would have offered the change desired.  Neo-Liberals, Blairites or Third Wayers – whatever you want to call them  - have been almost complicit in the rise of the new Right and we should not tire in reminding them of the consequences of their actions.
Posted by Allan at 13:00