For all of the moaning from certain pro-Unionist figures about the supposedly robust nature of the post referendum climate here in Scotland, it was never as poisonous as the current post EU referendum climate.  The successful court case brought by Gina Miller (below, with Nigel Farage) highlights, not just how much uncharted constitutional territory we are in (and that this would have been similar seas we would have sailed had the Independence referendum gone the other way) but the lack of confidence the right wing Brexiteers have that their own arguments and ideas will become political conventional wisdom. 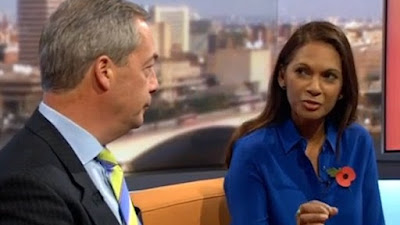 As someone who did vote to leave the EU, I can’t go along with this supposed groupthink that states that the court case was a step towards parliament blocking ‘Brexit’.  Anyone who believed the slogan that Brexiteers started to trot out about the time of the ITV debate (you know, the one where yours truly appeared on the news) about taking back control should understand that this is not about supposedly blocking Brexit, but more about defining parliamentary procedure.

Given the patchwork quilt approach to the so called British constitution – ie there not being such a thing as the British constitution – then is it really a surprise that big grey areas, such as how do we actually evoke Article 50 of the Lisbon Treaty, does wind up in the hands of lawyers.  Given this, then the other reason I’m not joining up with the pitchfork and torches brigade on this issue is that the May/Conservative approach to Brexit is not my vision of Brexit, and that whilst I don’t agree with the parliamentary Remainers they will at least provide the required scrutiny of May’s negotiations.

So far, the May government have not given us any guidelines or an inkling of their red line issues when it comes to the negotiations.  Any dropped hints have been firmly with the view of keeping Brexit voters onside with the red meat of immigration coming up and limitations on ‘Freedom of movement’ being an issue.  The EU’s own comments have revolved around any access to the prized “Single Market” being contingent on the retention of ‘Freedom of Movement’ which makes May’s negotiating position not look as strong as she would like.  On top of her pro-Brexit ministers saying different things, there is also the controversy of Single Market access being kept for the City of London and not Scotland.  Personally, I’d not like us to be in the Single Market, as we would still be within the sphere on influence of the European Union.

SNP ministers have been up in arms at the proposal for Single Market access for the City, but seem to have missed the why or the other proposal being asked for – special passporting measures being brought in to ensure the retention of Freedom of movement for people who work in the City of London.  This is something being lobbied for by big business backers of the Tory party.

If there is an argument that May’s Government have failed to get a grip on the referendum issue, those arguments will have grown after the meeting of the devolved governments two weeks ago.  When asked if she was undermining the UK’s negotiation position, the First Minister simply replied that she could not undermine something that was not there.  Sturgeon’s other comments about coming away with the meeting with as much knowledge of the UK’s position as she went in with was a devastating blow to the UK’s cool studied image that they know what they were doing.

The Westminster Government have argued that they need to keep their negotiating position a secret to help their position.  Sajid Javid made this point again during Thursday’s Question Time.  That this secretive behaviour is itself the sort of thing that people like me were pointing out that this is what the EU does, seems to have bypassed Javid.  I rather suspect that Javid & Co would prefer the deal with the EU to be conducted in secret and the presented as fait accompli once all the negotiations have been completed.  This, again, flies in the face of taking back control and all that means.  If memory serves, however, I don’t think that secret negotiations have always been the way these deals were done.  The last successful, Tory led, negotiation with the EU would have been the Maastricht treaty in the early 1990’s.  That’ll be the one where John Major publicly outlined his red line issues, what he would be looking for in advance.  And Major won UK exemption from the Social Chapter and from instant entry to the single currency when the treaty was signed in December 1991.

Of course, at that point Major was still working with Thatcher’s 102 seat majority from 1987, so Maastricht was still Major’s big success.  It was only after Major’s election victory, in April 1992, had resulted in a slashed majority of 21 where things got difficult for Major.

The problem with this debate is that the Left have, to all intents and purposes, left the field open for the right to make the running and narrative – hence the anxiety from pro-Brexiteers to ensure their ideas become conventional wisdom in the way Osborne-omics did.  It is also not helped by the fact that the two big left wing opinion writers – Owen Jones and Paul Mason – advocated holding your nose and voting to remain within the EU.  If only there was a UK politician on the left who was Eurosceptic and willing to make an alternative case for Brexit to the Tories hard Brexiteers…

The constitutional machinations, the arguments about immigration, the bitterness between ‘Hard’ Brexiteers and so called ‘Remoaners’, the anxiety among Brexiteers that they don’t have a grip on Brexit and the gentle unravelling of the UK itself somehow misses the point. The vote in June was not about a trade bloc but the UK’s membership of some deeply political institutions and entities who’s sole aim is “ever closer union”.  These institutions have, pretty much since the aforementioned Maastricht Treaty came into being, failed the people of Europe. The people at the heads of these institutions are not being held accountable for these decisions, and there is no mechanism to ensure accountability for these heads.  The UK’s navel-gazing has become a distraction from these issues about the EU.  I imagine that thanks to those distractions, in a restaurant in Brussels are Shultz, Tusk and Junker, sitting around a table, breathing a sigh of relief and thinking that they’ve got away with it.
Posted by Allan at 13:00