Dying Before Our Eyes


Last week was always going to be a hard, difficult week in the fight for Labour’s life with two key but unnecessary by-elections in England being contested.  The results of those by-elections coupled with events here have only strengthened the opinion that I have that Labour is a party heading for disintegration with a leadership (on both sides of the border) who have shown themselves to have zero political nous. 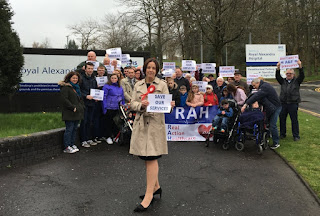 The original intention was to write only about the more local events happening here in Paisley, with Greater Glasgow & Clyde Health Board’s controversial decision to close a children’s ward at the local Royal Alexandria Hospital – 30 minutes walk from where I’m sitting.  However those events seem to be part of a bigger picture which proves how poor at politics the current generation of Labour politicians have become.

GGCHB had formulated plans to close this ward a couple of years ago so this is not a decision that has come out of the blue.  Indeed thanks to the current SNP Government’s own conservative policy towards the NHS here in Scotland – i.e. let’s continue to throw money at the service without looking at reforming the service or governance structures – then it is likely that Shona Robison will rubber stamp this decision.  However the ball is only now reaching the SNP Government’s court, there has been no SNP input to this decision up to this point, which is not how the local Labour Party have been spinning this.

If anything, the local Labour group have been spinning this as SNPBad from the off, complaining that the SNP have been planning this decision from the off.  This was front and centre of last years Holyrood election campaign for the local Labour candidates, especially for Neil Bibby’s attempt to unseat the SNP’s George Adam.  The election showed that there’s very limited political mileage (at that point) for a decision that was still some time off.  Since then though Labour have continued to hammer away at their message that anything the SNP do is bad.  It would be unfortunate then if the board of Greater Glasgow & Clyde Health Board included not just people from the professional board member classes of Scottish society but the leader of the council where the hospital at the centre of the closures is situated.

McMillan’s own membership of this board has hardly been mentioned by Labour, yet this is a decision taken whilst, nominally, Paisley’s man on the board was in the room while the decision was taken.  Of course, these decisions are all taken on an evidence basis with submissions from all interested parties, which does not show McMillan’s argumentative skills in a good light.  However if a local MSP’s submission did go missing and was not considered as George Adam is claiming (and this is the subject of a piece in Friday’s Paisley Daily Express), surely this invalidates the process.  It is this argument that Labour should be making, not that this is all the SNP’s fault.

What the RAH issue shows is a lack of political nous within Labour.  We already know that this is a party which has lost its way and is in desperate need of direction and a reboot of it’s core values.  Yet instead of debating what Labour is for, we have kneejerk policy pronouncements and policy positions with very little thought put into them.  This is an issue deeper than Corbyn or anyone else within the Labour leadership, though the direction of travel being pursued by both Corbyn and Kezia Dugdale do not help.  What this issue, and the issues regarding both Sadiq Khan and Corbyn’s own keynote speeches to the Scottish Labour conference show is that Labour is to all intents and purposes a rotting corpse of a party.  A Dead party in all but name.

Instead of attempting to bully and humiliate people back into voting Labour – and make no mistake Khan’s attempt to portray support for Independence as evidence of the Trumpification of UK politics is precisely that – Labour should be focusing on their policies and formulating valid and constructive criticisms of the current SNP government.   After all, the policy to put taxes up regardless of income is nowhere near the re-distributive spirit of Labour’s own founding fathers while there has been very little in Dugdale’s manifesto from last year that provided the radical left turn Scotland needs.

Talk of policy and positioning though might well be rendered irrelevant in the coming months.  The constituency of voters which propelled Tony Blair into 10 Dowing Street 20 years ago have, as I’ve pointed out, splintered and split into several different factions with the two referendums accelerating that process.  With every passing day it looks more and more impossible for a left of centre figure to emerge at Westminster and pull together the rapidly diverging values and priorities of that constituency.  Indeed, within the Labour party itself there are now two, distinct, political entities.  Corbyn’s Momentum group and the group for the pro-Blair modernisers – Progress.  The differences between those two groups look irreconcilable yet there looks like there has been of late an uneasy truce between the two.  Scottish Labour’s Perth conference enabled both wings to unite in their cack handed dislike of the SNP and the wider Independence cause, but the big final blue is looming and you wouldn’t bet on the Labour Party surviving in its current form.

Two posts back, we looked at why Corbyn has failed as Labour leader.  The by-election loss in Copeland, a first for an opposition party since 1982, provides yet another bit of ammunition for the anti-Corbyn faction within Labour and within the wider left wing diaspora.  Yet events over the past week have shown that Labour’s problems are deeper than Corbyn and operate on a more fundamental level.  What is not in doubt is that there is a huge gap in the market for a left of centre party with values centred around (in no particular order) protecting workers rights, protecting basic human rights, promoting equalitarian values and formulating an economic policy geared towards the workers and the many.  The current Prime Minister was previously an average Home Secretary who seems to have assumed an iron grip on UK politics, in spite of the fragile majority bequeathed to her by her predecessor.  That May is in this position shows off perfectly well the paucity of talent or lack of conviction on the left in this disunited kingdom.
Posted by Allan at 16:00

An interesting analysis. I think we have to consider Brexit's role in the downfall of the party - we are living in peculiar political times, and there has never been a time where we have been faced with this kind of bleak political outlook. Particularly in Copeland, there was a direct transfer of voters from UKIP to Tory, in which case Labour didn't stand a chance. The candidate selected in Copeland was also useless.

What happened to this influx of new members? We need to mobilise and organise them to win internal selections. There is a plethora of untapped potential out there and it's because of this I have a lot more faith in the Labour Party than you do...call me naive...

With regards to the local Labour Party in Paisley - well, that's another discussion for another time. They are pretty useless. I remember meetings when I used to live in Paisley. We used to spend more time discussing putting up missing posters of Mhari Black than we did having any kind of critical self reflection as to why we were sitting in a wee room on a Friday night with ever dwindling numbers. If Neil Bibby and Mark McMillan are the creme de la creme, then it's no wonder Paisley is now an "SNP Town" rather than the "Labour town" it had been for fifty years or so previously. Unless there's a draining of the swamp and new blood brought through, then the Labour Party WILL die. The problem with the Paisley Labour Party is that they are completely unwilling to accept this