Poisoning The Wells Of Scottish Politics


I had kind of glossed over Sadiq Khan’s speech last week hadn’t I…  Ah well, it’s not as if it’s caused any controversy or anything like that… 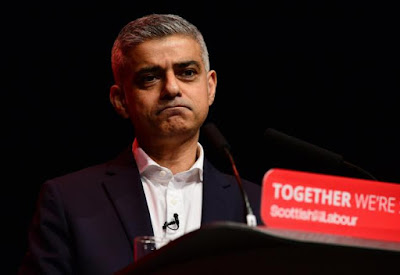 The thing about both the Khan and the Corbyn speeches are that they make the classic English Lefty mistake of conflating Nationalism with the Scottish desire for national self determination.  Sure he’d toned down his comments from those heavily trailed in Saturday’s Daily Record, an act that makes me suspicious that Scottish Labour (in particular Anas Sarwar) had a hand in the deliberate ramping up of the anti-SNP rhetoric.

Someone who did notice the (over?) reaction towards the London Mayor’s comments was the Stirling University researcher Claire Heuchan, who penned a piece in the Guardian in support of Khan.  She’s also supporter of Better Together, but that in no way should disqualify you from having a view on Scotland – at a time when Independence supporters need to win over… er… No voters from 2014.  You can filter those views accordingly but to dismiss them out of hand is simply not democratic.  On that basis, while I don’t agree with everything in this piece, it does raise questions about how the case for Independence redux is being prosecuted by the more hardline pro-Independence supporters and the direction of travel for those pro-Indy fundamentalists.  Those questions only grew louder in the wake of the vitriol aimed at Heuchan for her article, raising the issue further that those pro-Independence fundamentalists are taking their behavioural cues from the great farting euphemism across the pond.

Heuchan’s piece argued that there was an inherently racist streak within the SNP, identifying this not along ethnic or colour lines but Scotland versus England lines.  It is a fascinating argument, one which has it’s roots on the SNP’s use of the performance of English public services to show how well the Scottish services are performing.  It is here I agree with Heuchan, with her attack on the SNP’s assertion that Scottish values are better than English values. “The mythos of Scotland as a friendly, compassionate country is maintained with fervour – like any other fairytale, it needs heroes and villains.”.  Sure, the Scottish sensibility is different from England and we are more in favour of public services.  But that sensibility is becoming arrogant.  We saw that in the first Independence referendum when the then Referendum secretary kept on linking the idea of Euroscepticism to right wing Tories, airbrushing Tony Benn, Peter Shore & half the Wilson & Callaghan cabinet’s out of the story.

However that assertion is ultimately one which doesn’t really stack up, notwithstanding Alec Salmond’s old quote about England gaining a friendly neighbour rather than a surly lodger.  That’s not to say that Scottish society isn’t a racist society, I think we’re much better at deluding ourselves that we’re not – given that a lot of it is simply laughed off as ‘banter’ or something old people say as my family said when my now late Gran used to talk about… shall we say… going to the shops.  I should also point out that as a white male, I’m not exactly in a position to be any sort of authority on Racism.  Any prejudice I’ve experienced certainly can’t be attributed to the colour of my skin.  In this respect, Heuchan’s views carry more weight than mine.  My hands are up and I’m nowhere near anything resembling high ground, so to speak.

I think where Heuchan’s piece hits the mark – and I’m not sure whether this was the intention or not – but it identifies in a between the lines kind of a way a creeping intolerance within some, maybe a large minority though I’d be guessing how many if I’m honest, within the pro-Independence fundamentalists of different views.

The quote which identifies this flaw best is where Heuchan says “There is a hermetic streak to Scottish nationalism…”.  The drive towards a second Independence referendum is being driven by people within the bubble, and in the virtual world, by the Cybernats convinced that just one more push will deliver Independence regardless of real world conditions and the criticisms of…  well… non believers.  The rest of that sentence goes on to say that Scottish Nationalism is “…small and inward looking despite the SNP’s talk of a global Scotland, that persists without reason”.  I’m not sure this is a piece attacking the SNP or the concept of an Independent Scotland per se, but more a piece on a certain type of Independence supporter – the Indy Fundamentalist.  Or if you’d prefer, one of Wings chimps.

Scratch beneath the surface and there’s something else.  Something that rings that bit truer than the racism story.  That of a growing intolerance of people speaking out against Independence & the SNP, especially when she speaks of the SNP outrage at Khan. “Predictably, SNP politicians and supporters alike were outraged. How dare anyone question their vision of a progressive Scotland?”  The idea that Scotland is not as progressive as we think we are permeates the piece.  Interestingly enough, this narrative has gained currency with the criticism of the article itself, with the aforementioned Indy Fundamentalists not taking the piece very well.

Rather too predictably, according to the Guardian, Wings was true to himself and fired off some abusive tweets.  As I’m blocked, presumably for not being remotely sycophantic enough, I can’t tell you what they said. Heuchan didn’t mention Wings by name, but among the criticisms, his name is in the background.  The intolerance of anyone who puts forward a viewpoint at odds with the SNP/Yes world view, tick.  Thin skinned (“small & inward looking”), tick.  “persists without reason”, well you can thank all those SNP politicians for re-tweeting without looking at what he says for that, but yeah tick.

Looking at the reaction on Twitter, you see the same thing happening again and again.  Criticism followed by outrage without any real reading of the criticism, just because someone dares to criticise the firmly held SNP orthodoxy.  The criticisms and rebuttals are now turning nasty.  In the real world, like on-line there’s a ‘them and us’ culture.  There’s a bitterness which, if it is not checked threatens to undermine the whole SNP vision of a different Scotland being possible.  I’ve seen a small bit of that criticism myself, for daring to be a non supporter of the European Union, yet I know that the criticism I’ve received is nothing compared to the outright abuse Heuchan and others have received.  The fact that such a divisive and abusive figure is at the heart of the pro-Indy fundamentalists campaigns somewhat drives a coach and horses through Sturgeon’s desire for ‘One Scotland, Many Cultures’, after all you can’t really advocate a nice cuddly inclusive Scotland when pretty much most of your party’s hierarchy supports and re-tweet's (on a regular basis) a supporter with known misogynistic and homophobic views.

Campbell was at it again this weekend.  Having got his troop of supporters to run Heuchan off of twitter, he tweeted about Oliver Mundell.  If it wasn’t for the fact that Campbell already has publicly questionable views on Chelsea Manning among others, he’d maybe have a questionable case for sending an ‘anti-Tory’ tweet.  Instead, it’s just another stain on the case for Independence.

Heuchan’s piece asks us to talk about racism, but in another level challenges us to look at ourselves and ask if we really are the open, non judgemental progressives that we shout about on a regular basis.  It is somewhat telling that ‘some’ of the Indy Fundamentalists failed this test straight away.  If Sturgeon and the SNP are really serious about Independence and a fair inclusive Scotland, then they need to sort out their own Bath based little man Trump problem.
Posted by Allan at 12:00