It's Deja Vu All Over Again


Regular readers of this blog will know that the previous referendums this country have organised were announced quite out of the blue and resulted in proposed posts being spiked.  That tradition has continued as this week, I’d planned to bring you reasons why Theresa May will wait until 2019 (at the earliest) to call that much speculated General Election.  So, thanks Nicola Sturgeon for sparing the country that… 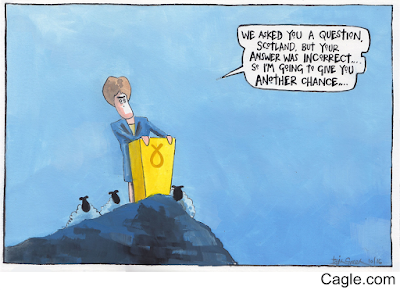 There is only one conceivable angle where announcing the intention to hold a second Independence referendum now works, that is if you are signalling your intention that an Independent Scotland becomes a fully paid up member of the EU, bypassing the will of the electorate.  Therefore it is obvious that Independence will be tied to membership of the EU.  The problem with that of course is that of the people who voted for the SNP in 2015, 36% (according to Michael Ashcroft’s post EU Referendum polling) voted against their own party’s line.  I’d imagine that those people who have seen the Scottish Government, via EU directives, put key ferry services out to tender and the UK Government, as part of the Lisbon Treaty, privatise the Royal Mail, will baulk at Blair Jenkins description of the choice between a “Social Democratic Scotland within the EU” versus “a right wing Tory Brexit Britain”.

Other than that, calling this referendum makes no sense whatsoever at all.  Average polling is still roughly where the 2014 referendum left us, the expected bounce post EU Referendum has only happened in the minds of fevered activists and James “Scotland goes Pop” Kelly.  When she was elected as SNP leader, Sturgeon said she’d only hold a referendum if polling suggested consistent leads for Independence, so why hold one now when you’re still behind and there is clearly no ‘settled will’ for a second Independence referendum at the moment?

The other issue facing the Neo-Yessers is that the SNP have not shown any signs of coming to terms with how they lost in 2014.  That they were battered over currency masks how poor the economic case was prosecuted with oil both a bonus and the bedrock of an Independent Scotland’s finances.  Yet, even if the so called figures have deteriorated and are less favorable, the pro-Independence side’s task still remains the same – to show that an Independent Scotland can work.  The £15bn deficit is only a jumping off point after all.  Whoever is making the economic case (it shouldn’t be the terminally awful Business For Scotland, with their outlandish claims last time around) should be putting forward viable reasons how an Independent Scotland could work.  For tips on how to prosecute an economic case, perhaps they should be looking at Kevin Hague’s blog for tips.  I don’t agree with what he says, but he did show up Business for Scotland three years ago.

Of course, if the figures for Scotland have deteriorated, the case for Independence has not improved therefore the case for remaining within the Union must have improved, right?  Ummm, actually the case has remained the same... the attractiveness of remaining within the UK though is another matter.  Forgetting Brexit, we’ve seen a sharp right turn from the UK government and a rapid disintegration of something called British values from high profile politicians, the commentariat and other sundry media figures.  Casual racism is now mainstream, while respect has all but disappeared from public forums.  True, some of the sneering started during the first Independence Referendum, but since then Westminster has gone full Farage.

Whilst Theresa May’s cack handed handling of the EU referendum – essentially she’s going to argue for cliff edge Brexit when she could easily have sat back and let the EU push for it making them look like the bad guy’s – has precipitated a second Independence referendum that was avoidable at this moment. It was Cameron with his victory speech, moments after the ink was dry on the first Independence referendum, tying English votes for English laws to further powers for Holyrood, which all but ensured that there would be a second Independence vote.  And it was the Westminster village’s misreading of the referendum result – seeing an issue closed when the better interpretation would be of a couple needing marriage counselling – which has seen the London-centric commentariat adopt a gradually more sneering stance towards Scotland.

Of course, the pro-Independence supporters are excited and the pro-Indy fundamentalists are over the moon at sticking it to the hated ‘Yoons’.  However you should ask yourself one simple question.  Should you hold a referendum when you are all but certain of winning it – like Harold Wilson did in 1975 and Blair did in 1997.  Or do you hold it when you’re not certain of victory – like Callaghan did in 1979 with the Scottish Assembly vote and like Sturgeon’s predecessor did in 2014.  And shouldn’t you hold a referendum when all of your arguments are utterly bombproof, which was Cameron’s big failing last year?  It seems like an awfully big gamble from the First Minister, a bigger one if it’s tied to EU membership.  Unless the government insist on a vote after the UK exits the EU (which, coincidentally I think would help the SNP) then I think this referendum will be doomed to failure.
Posted by Allan at 13:00