When someone becomes an ex-leader, there are normally two ways things can go. There is the back seat driver route, favoured by Thatcher and Blair. Most leaders though tend to follow the line unwittingly defined by John Major when he left Downing Street for the last time as PM in May 1997. “When the curtain falls it is best to leave the stage”.

There is, of course, now the third way, the way which Alex Salmond is now pioneering which rejects the concept of the ‘elder statesman’. 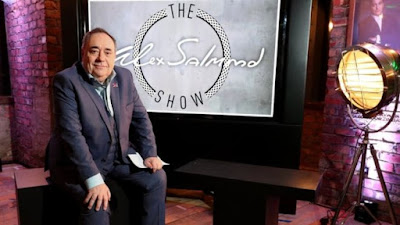 We have seen Mr Salmond again in the news this week, having signed up to produce and front a political chat show for the notorious (in UK media circles anyway) news ‘organisation’ Russia Today. For some people this has not gone down very well. By all accounts, the First Minister herself is not said to be happy about this. The critics do have a point.

For someone who professes to be a democrat and to wish to uphold democratic values, it is not a good look to be providing content for a news organisation whose reputation is of essentially a 21st century Pravda. The charge against Russia Today is that they are essentially the mouthpiece of Putin and his government. While it is true that Salmond’s moves are disdainful, the phrase about glasshouses and stones comes to mind. Various Westminster MP’s have appeared on Russia Today as talking heads, most recently the ‘Sage of Twickenham’ Vince Cable. If Russia Today was that bad, shouldn’t they have declined their invites? Similarly there is little mention of Jeremy Corbyn’s appearances on various middle eastern news channels (he apparently has a slot on Iranian news).

Any mention of news channels dressing up fake news brings to mind another news channel, one rarely mentioned either by critics of Russia Today or by supporters of Salmond (who see this as another excuse to indulge in the tiresome sport of BBC bashing). Fox News before it was pulled from our screens by its parent company was recently charged with two counts of biased reporting. With this in mind, and the fact that Fox was the network that claimed that Birmingham was ‘a no go area for non-Muslims’, then you do wonder where the (equally deserved) brickbats are for regular UK based Fox contributors and general Trump/TEA Party sympathisers like the MEP’s Daniel Hannan and, err... Nigel Farage.

The thing that most people commenting on Salmond’s career turn have missed is that Alex Salmond doesn’t really care what people think. I’m not sure he wants to be that kind of elder statesman like (god preserve us) Paddy Ashdown or John Major. Certainly Salmond’s ego would never ever allow him to all but disappear from public view like his predecessors in Bute House, Jack McConnell and Henry McLeish, have done (save from the occasional appearance). Salmond, for better or for worse, still thinks he has an active part to play in the discourse of this country. It explains his behaviour relating to accepting the offer to provide content to Russia Today (an outlet substantially more ‘favourable’ to the concept of Scottish Independence than any UK based broadcaster) and it explains his bid to be put onto the board of Johnston Press, the owners of the Edinburgh newspaper ‘The Scotsman’.

If Salmond genuinely wanted to be a grandee in the style of Winnie Ewing, then his reputation as a serious figure in that mould would have been damaged long before this episode with Russia Today. Granted, he became an MP again after sparking a feud with Nick Robinson at the end of the Independence Referendum campaign and by continuing to play the BBC Bias card (whereas in truth, the real instance of BBC bias has been against Corbyn and his Momentum acolytes, it is a lot more blatant than any perceived ‘anti-SNP’ bias).

I think that the moment that guaranteed that Salmond’s career as a serious political figure was over was the series of shows at the Edinburgh Fringe Festival in August. Serious political figures do not diminish themselves and turn themselves into vaudevillian entertainers. And serious political figures do not make bad, vaguely sexist, jokes that even Bruce Forsyth would have baulked at making. Yet Salmond seems not to have learned the lessons of history by pressing ahead with his no holds barred show. The only other leader to have tried a career in television after leaving office was Harold Wilson, who had a very short stint hosting “Friday Night, Saturday Morning” in the autumn of 1979. From the clips I’d seen (I think when BBC 2 did it’s TV Hell night in the mid 90’s) it wasn’t that great and also showed us the first visible sign of Wilson’s Alzheimer’s.

Wilson’s reputation took a knock, but partly due to us better understanding Alzheimer’s now, and partly because of a general reappraisal of Wilson’s time in Downing Street (if you’ve seen Steve Richard’s “Leadership Reflections” monologues – which I reference when talking about the political space to hold Indyref 2 – then the Wilson programme is fascinating in that respect) his reputation is recovering. Unlike Wilson, Salmond commands respect across his party. His issue is that he is seen as a divisive figure across the political spectrum. His deft handling of the first administration is all but forgotten.

The assumption across the mac-commentariat was that Salmond would retire and become some sort of avuncular elder statesman figure. Think a Scottish Tony Benn. If that was the case, they’ve underestimated Salmond’s ego and its capacity to override any political pragmatism he may have by showing a liking for growing older disgracefully.  Alongside the shows, the chatshow is a vehicle for Salmond's ego in the face of unfinished business, nothing more.
Posted by Allan at 13:00