Nothing perhaps tells us more about the reduced circumstances of ‘Scottish’ Labour than the fact that the current leadership election is firmly background noise to other, bigger issues which are dominating the news. With sex-pestery dominating the headlines (and please please, can we not call it sleaze even if it’s called that with more justification here than during the 1990’s) this is an election battle coming to a conclusion in the next week or so. 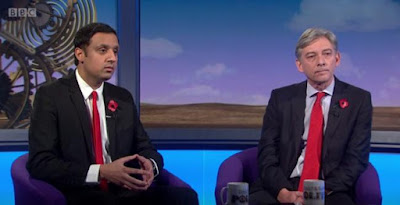 As I’d pinpointed when Dugdale resigned, the favourite is Labour’s current health spokesman Anas Sarwar. There was a point in September when his campaign looked terminally holed under the line when revelations surfaced about the family business he held shares in. In short, a millionaire owner of a business which did not pay its workers the minimum wage was not a good look for a prospective leader of a party committed to workers rights and a equalitarian agenda. Alongside the question of sending his children to a fee paying school – a question which dogged Blair in his early days as Labour leader and it also led to Harman leaving the shadow cabinet – this painted Sarwar’s campaign as a doomed campaign.

There is also the suspicion that there are also people who have signed up to become members to just vote for Sarwar, with the insinuation that these are Scots-Asians who are influenced by the Sarwar’s standing in their own community. It’s not as if there are people signing up just to vote for Leonard, are there... err...

As it happens Sarwar’s campaign has been far from doomed. In the television debates between the two men, Sarwar has bested Leonard in all of them. He has put his ideas across very well and in one of the debates went on the attack over Leonard’s (perceived) non-commitment to keep Scotland in the single market. In sharp contrast, the supposed ‘Corbynista’ candidate, Richard Leonard, has looked leaden footed and rather slow witted. The only really difference between the two candidates is essentially how both have performed, and that in itself is somewhat disappointing.

Part of the reason for the similarity in the two is Sarwar’s adoption of Corbyn style taxation policies – he promises to put taxes up for the wealthy whilst cutting it for low paid workers. There are parts of this which is appealing and worthy of debate. It has also provoked the response from the SNP that they are the true progressive party of Scotland (any response should make the point that they refused to be this radical when they had the opportunity to be so in 2016, therefore the SNP’s rediscovery of a revolutionary zeal should be seen with the timid & conservative 2016 manifesto in mind). The other SNP announcement is to... err... preannounce an intention to have a debate on taxation with the SNP minded to put taxes up.

The other reason is that I’d suspect, as I pointed out earlier when Dugdale resigned, that the timing of Dugdale’s departure unintentionally hindered the pro-Momentum branch of Scottish Labour. If there was a plot to oust Dugdale, I’d suspect that they were not ready or prepared for a leadership battle this autumn. If they were, we wouldn’t have seen so much focus on tax policy, which brings me to my point.

Given that both Sarwar and Leonard have focused so much on tax increases, there is shockingly little thought on why taxes need to go up. Two years ago, when I responded to Chris Deering’s “Scotland Has Gone Mad” piece, I made the point that both the SNP & Scottish Labour had retreated towards a lazy form of Social Democracy where indiscriminate tax rises are somehow seen as “Socialist”. As if to prove my point, Dugdale’s flagship policy at last years Holyrood election was a rise in taxes because “it was the progressive thing to do”. Sadly both Sarwar and Leonard have fallen straight into this trap.

That’s not to say that there shouldn’t be a debate about taxation, especially with those new taxation toys that are Holyrood bound. There is a gaping hole here though, public service reforms. The sort of reforms that it now looks like the SNP is not interested in making, eschewing that for the prize of Independence. It’s a pity as I suspect that their timidity quite possibly cost them votes in 2016. From Scottish Labour’s point of view, the reforms they should be thinking big about are schools and the NHS.

Schools, because the Curriculum for Excellence does not look like it is working. Michael Russell’s reforms is still proving cumbersome for teachers to facilitate properly while there have been several reports highlighting the falling standards of Scottish education. While with Health there are the failures to reach targets. Locally though there are concerns about the management at the arms length Greater Glasgow Health Board and their high profile decision to close the Children’s ward at Paisley’s Royal Alexandria Hospital. The truth is though that this proposal is the tip of the iceberg as far as GGHB’s management of the RAH has been concerned. There have been a number of services that have been downgraded at the RAH, some of them have been down to the new Southern General hospital in Glasgow’s south-side being given preferential treatment for services.

If the SNP have botched reform of Education, then this is ripe to be put right. Health is also ripe for reform. It is here where there should be a focus not in pouring resources indiscriminately in but on a SWOT analysis of what needs fixing and how it can be fixed. Given that any time I’ve been in the RAH the frontline staff have been nothing other than excellent, I’d start with management and Health Board structures. Democratise the health boards, cut back on representation from the ‘professional board member’ classes and in the ranks of NHS managers and go from there.

It is not just in the promised radical policies that we are still waiting for Momentum, but in the kind of firebrand leadership needed to facilitate those policies and that kind of politics. Instead the candidate of the left in this election is not unlike Corbyn himself, okay at speeches but with question marks over his abilities as a leader. Sarwar might be continuity Dugdale – with all the baggage over Independence and a closeness to the pro-Blair Progress that these bring – but in spite of the disastrous start to his campaign he still looks like the marginal favourite to win. Just.