Hi there, as you may have gathered, I have some writers block regarding my blogs on our holidays. Regardless to say, hopefully, these should be appearing soon. 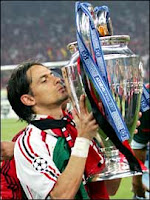 I used to be a big fan of the Radio 5 Live commentator Alan Green. Not that I am not anymore, just I am not so keen. That and more and more, I hear him say something that I just don’t get. For example, during the European Cup Final tonight (no, im not going to call it the bloody Champions League Final), I heard him say that the Liverpool manager Rafael Benitez had got his tactics wrong. If he did, and I don’t think that he put a foot wrong all night apart from taking off Mascherano, he has one man to blame for his sides defeat, one Pippo Inzaghi.

Liverpool did not do anything wrong during this match, however you cannot account for the goal poacher, the player who’s skill is to be in the right place at the right time. Green was also incredibly churlish about Inzaghi, by not crediting him with the first goal, “He didn’t know anything about it”. Well, sorry but I think he did. He wouldn’t have gone there if he thought there was no chance of a deflection, or more likely a spilled shot. It was always this sort of half chance that would decide the game, the sort of chances that the Inzaghi mold of striker usually thrives on. Inzaghi kind of reminds me of Ally McCoist, though I don’t remember McCoist being constantly caught offside or throwing his hands in the air.

Until Inzaghi’s first goal, Liverpool were dominating more and more of the game. They would have gone on to score the crucial first goal probably in the early stages of the second half. Instead Milan won, the second goal was equally crucial in that it sealed the game and was the best football of the mach from Milan. The 2 goals showed that being at the right place at the right time will get you anything.
Posted by Allan at 00:28