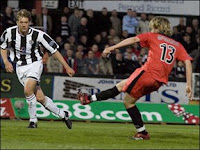 Dunfermline threw themselves a relegation lifeline with a deserved victory at St Mirren Park. Tam McManus (left) scored the only goal of the game after 58 minutes, when he collected Scott Muirhead's deflected shot to fire home from close range. The capacity crowd of 10,251 were treated to plenty of endeavour, but little in the way of skilful play by either side. 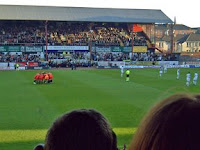 Hi there, I was going to blog about the 10th anniversary since New Labour came to power today, and my memories of that famous election night, but I will do that one tomorrow. Instead its my take on the biggest game at Love Street, since the 2-1 win over Dundee which won promotion for ourselves. And as you can tell from the blurb at the top, it didn’t go the way of the (less than) mighty buds.

St Mirren pretty much lost the game in midfield, the Dunfermline middle men muscled the midfield of Brittain, Brady & Murray out of it from midway through the first half onwards. In the second half, 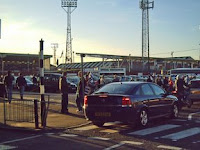 Dunfermline soaked up this bombardment, and used the gift of continued possession to launch several quick counter attacks, the goal, and McManus’ two other chances came from these attacks.
While it is disappointing that once again we revert to these tactics when we lose a grip on games, I am not entirely sure if the manager is at fault here. However, I do think that he could have changed the pattern of the attacks, playing 2 small quick mobile strikers (Kean & brining on Corcoran) against the tall Dunfermline defen 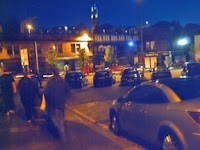 ce rather than persist with the little and large partnership of Sutton & Kean (Kean kept on coming back to midfield, that is how poor our midfield were).

We are still a point ahead of Dunfermline, but they have the momentum and crucially, the psychological advantage. Our next game is on Saturday at Tanadice (against Dundee United), while Dunfermline do not play again until next Monday (against Motherwell). I have a feeling that we will see how good Gus McPerson really is over the next 3 games.